As the first of its kind freestanding, ambulatory, cancer surgery hospital, the new Josie Robertson Surgery Center (JRSC) in New York City blends a soothing environment with technological enhancements to ensure that the patient experience is short and sweet.

That’s the intention by design, say hospital leaders at the surgery center, which is part of Memorial Sloan Kettering Cancer Center. The goal is for patients to feel so good after their procedures that they are ready to go home the same day or the day after their surgeries, says Brett Simon, M.D., director, JRSC. 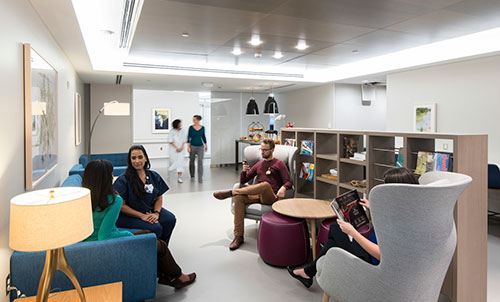 Creating cozy and inviting waiting rooms was a distinct design goal on this project.

The prevailing thinking is that when it comes to recovery, there is no place like home. “The patients, we think, will recover much better at home than they can at the hospital,” says Peter Scardino, M.D., chairman, department of surgery, JRSC.

From an emphasis on natural light and views of the city from all private rooms to creating cozy, inviting waiting areas with abundant artwork, the $300 million, 16-story facility makes patient, staff and visitor comfort and satisfaction high priorities. Located on Manhattan’s Upper East Side, the facility features sweeping views of the East River.

“My favorite thing about the building is that the design is human-centered,” says Suzen Heeley, executive director, design and construction, JRSC. “We’ve considered all of the amenities, all of the support elements that patients, caregivers and staff need to function in this building and for the patients to have the ultimate patient experience.”

Heeley says that as hospital staff researched the project, it looked for other similar facilities and determined that JSRC would be a first. “We looked for relevant projects across the nation. Surprisingly, we found that there weren’t any,” she says. 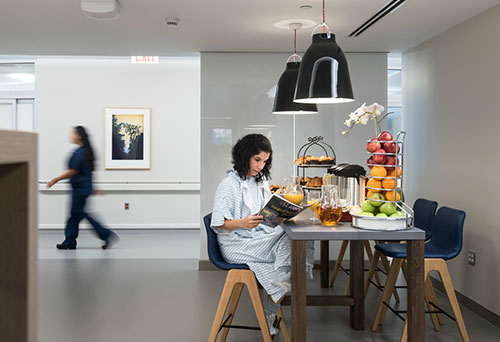 Patients can move freely throughout the facility before and after their procedures.

Surgery center staff across all departments provided input on the welcoming, serene design, led by architecture firm Perkins Eastman and innovation and design studio ICRAVE, both of New York City.

The waiting room at the JRSC is filled with private spaces for families to find peace and quiet, as well as options for distraction, dining and exercise.

Technology plays a role in the new facility, too. Waiting areas include high-tech bar tables where family and visitors can use or recharge their laptop computers and other portable devices.

Patients are given real-time locating system badges so they can move freely about the facility before and after their procedures. The badge tracks their locations and also how much physical activity they have experienced post-surgery, which the surgery center encourages.

Surgeons can securely videoconference into a patient’s room any time of day with a tablet to check on his or her status and to offer advice before they are discharged from the facility, says Vincent Laudone, M.D., chief of surgery, JRSC. 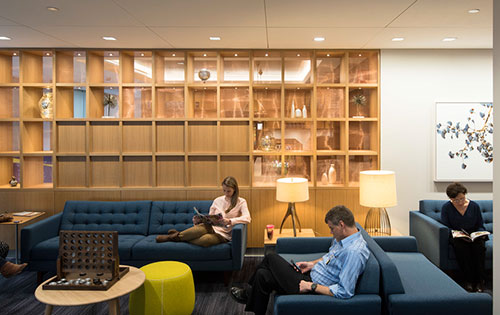 “We are pioneering a new standard for outpatient surgery, one that seeks to transform cancer surgery worldwide,” Simon says. “Our commitment to elevating the patient experience is reflected in our emphasis on minimizing the anxiety often felt by patients undergoing cancer surgery.”

The new center is indicative of the rapid growth in ambulatory care facilities offering varying levels of clinical services in New York City and in large urban areas across the United States. A small percentage of patients who need more time to recover than the surgery center provides are transferred to Memorial Hospital just a few blocks away.

The facility includes decentralized nurses' stations so they aren’t located in just one area. Instead, the stations will be located between every two patient rooms, which brings them closer to the patient’s bedside.

Staff spaces feature flexible workstations, a communal kitchen and social hubs that are equipped to have meetings and connect with co-workers.