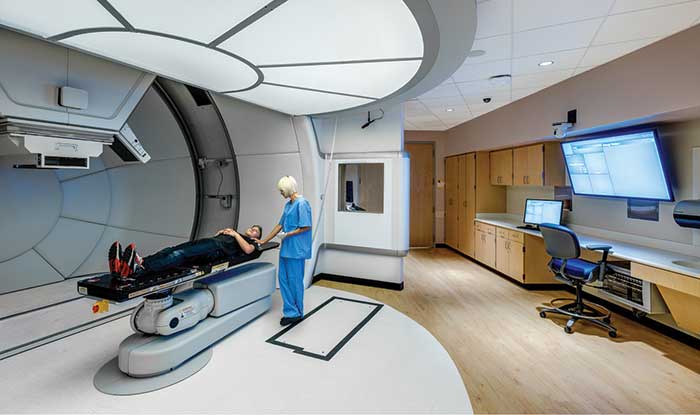 Located at Cincinnati Children's Liberty Campus, the approximately 89,500-square-foot facility will serve families in and near the city, the surrounding region as well as from other parts of the U.S. and the world, according to Cincinnati Children’s. Treatments were scheduled to begin last month.

"Proton is advanced cancer therapy. I am pleased it is now available to our pediatric patients with the most challenging types of cancer, underscoring our deep commitment to always provide the safest and most effective treatment options," says Michael Fisher, president and CEO, Cincinnati Children's.

Because cancer treatment can create anxiety in patients and family, it was important to make the facility and clinical areas cheerful and friendly, says Erik Mollo-Christensen, principal, Tsoi/Kobos & Associates (TKA) Inc., Cambridge, Mass., and lead designer on the project.

“There’s a big emotional component to the patient’s experience, which is especially acute for kids,” he says, adding that designing a colorful and stimulating environment with lots of daylighting and artwork are key elements throughout the facility.

The center is the 11th TKA has worked on in the U.S. and Asia in the past 20 years, Mollo-Christensen says. The experience was essential in designing the new facility, he notes.

The center features a Varian ProBeam proton therapy system and two clinical gantries, one for pediatric patients and the other for adults. A third gantry is dedicated to research, and the building includes space for a fourth. Each gantry is about three stories high.

Proton therapy is a form of radiation treatment that utilizes a beam of protons to blast diseased tissue precisely. It extracts positively charged protons from hydrogen gas and accelerates them through a 90-ton cyclotron, or particle accelerator, up to nearly two-thirds the speed of light.

The protons are guided to the tumor site by powerful magnetic and electrical fields, and carry just enough charge to reach a precise point in the tumor.

In addition to providing treatment, the center will have the world's only proton treatment gantry fully dedicated to research.