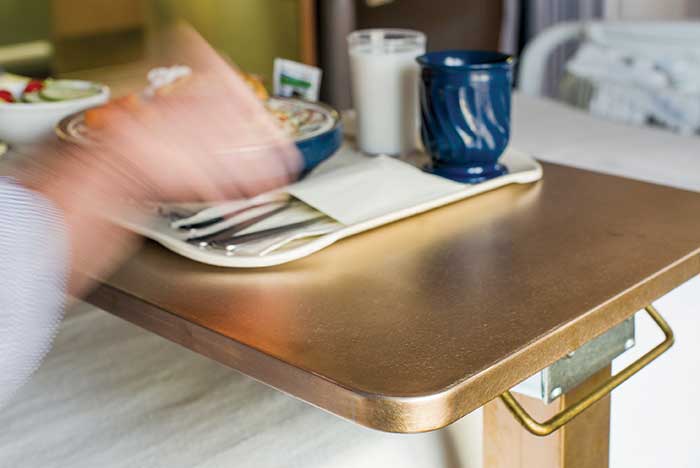 “I figured even if we had a relatively small number of hospital-associated infections, one was too many, especially if somebody ended up with an infection that we have trouble controlling with antibiotics,” Linden says.

In 2014, Grinnell Regional Medical Center partnered with Shannon Hinsa-Leasure, Ph.D., associate professor at Grinnell College, on a research project to assess the ability of copper alloy materials on high-touch surfaces to reduce bacteria levels in 13 of its 26 medical-surgical rooms. Two key findings emerged from the study that was published in the American Journal of Infection Control (AJIC) earlier this year. First, the copper alloy surfaces installed on 20 high-touch surfaces in patient rooms and in-room bathrooms reduced bacteria levels on average by about 98 percent after terminal room cleaning procedures. Second, the med-surg rooms not outfitted with copper had high bacteria levels even after terminal room cleaning.

“It was a statistically significant difference,” says Hinsa-Leasure, who noted that bacteria tended to repopulate in unoccupied spaces even after thorough cleaning and disinfection. The reason: Building air circulation, clinical and other staff entering unfilled patient rooms, the fact that no surface is ever completely free of bacteria and other factors play a part in why bacteria repopulate on surfaces.

This helps to explain why so many hospitals need to pay closer attention to surface selection as well as cleaning and disinfection protocols going forward.

Other studies have found that copper alloys kill most bacteria within two hours of contact and some facilities have demonstrated the effectiveness of copper alloy surfaces to reduce the bacterial burden and lower the rate of HAIs in intensive care units, according to the GRMC research article.

In a much larger-scale study conducted at Sentara Leigh Hospital in Norfolk, Va., researchers determined that hard surfaces and linens infused with copper oxide compounds contributed to an 83 percent reduction in Clostridium difficile and a 78 percent overall reduction in a host of
multidrug-resistant organisms.

The nearly 26-month study, also published in AJIC this year, concluded that copper-based technologies may be useful in reducing HAIs in acute care hospital settings and noted that additional studies are needed.

Researchers took a before and after look at the impact of UV disinfection on C. difficile infection rates.