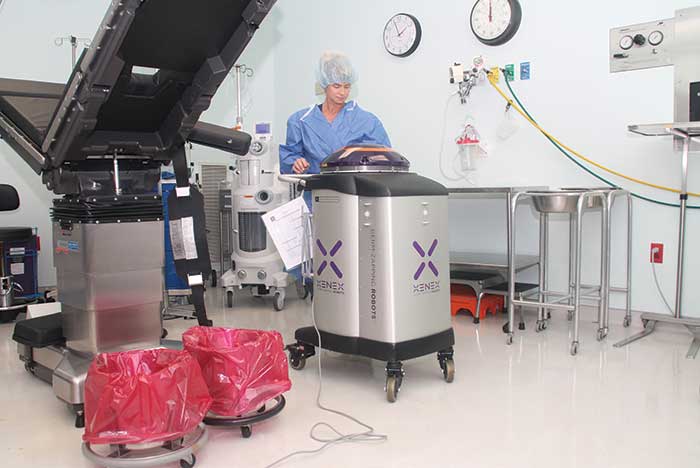 As much as hospitals have been seeking weapons beyond chemicals to kill multidrug-resistant organisms in patient care areas, infection prevention teams have been asking for more research on one of the more popular alternatives: ultraviolet (UV) light disinfection. Those requests are being answered.

This past year has seen a slew of research studies published in peer-reviewed journals as well as poster presentations on findings from various research projects at a variety of large and small facilities.

A research article with detailed findings of the study, Benefits of Enhanced Terminal Room Disinfection, at Duke University and the University of North Carolina on the efficacy of using Tru-D’s ultraviolet light disinfection system in terminal room cleaning is in review and awaiting publication. Preliminary findings from the study were released in the fall of 2015 showing that enhanced terminal room disinfection strategies that used UV-C emitters reduced the risk of acquisition and infection caused by targeted multidrug-resistant organisms (methicillin-resistant Staphylococcus aureus, vancomycin-resistant enterococci, Clostridium difficile and Acinetobacter). The study was funded by the Centers for Disease Control and Prevention's Prevention Epicenters Program.

Chuck Dunn, CEO of Tru-D SmartUVC, Memphis, Tenn., reports that 14 Tru-D devices will be used in an unsponsored, large-scale clinical trial at the University of Wisconsin Hospital.

Meanwhile, infectious disease and prevention professionals from the Mayo Clinic in Rochester, Minn., presented a poster of their findings at the Association for Professionals in Infection Control and Epidemiology Annual Conference in June. They detailed how pulsed xenon UV technology from Xenex, San Antonio, was used to target C. difficile infections (CDI) in six units with bone marrow transplant patients and others at high risk for CDI. During the six-month study, the hospital-acquired CDI rates in the intervention units dropped 39 percent, while there was a 42 percent increase in CDI in the control units that were not disinfected with pulsed xenon UV.

“The peer-reviewed literature has clearly established that the environment plays a major role in infection risk and the use of pulsed xenon UV can reduce that risk. As a result, we are seeing hospitals launching comprehensive infection prevention programs covering facilities and even health care systems with the deployment of 10 to 30 robots,” says Mark Stibich, Ph.D., Xenex chief scientific officer.

Elsewhere, clinicians and infectious disease professionals from the Perelman School of Medicine at the University of Pennsylvania published results in October of a 12-month study on the use of Pleasanton, Calif.-based Clorox Healthcare’s Optimum-UV system as part of terminal room cleaning in three hematology-oncology units with high baseline rates of CDI. The UV system was deployed for 521 patient discharges on the three study units, where the CDI rate declined 25 percent, compared with a 16 percent increase on non-study units during the intervention vs. baseline period.