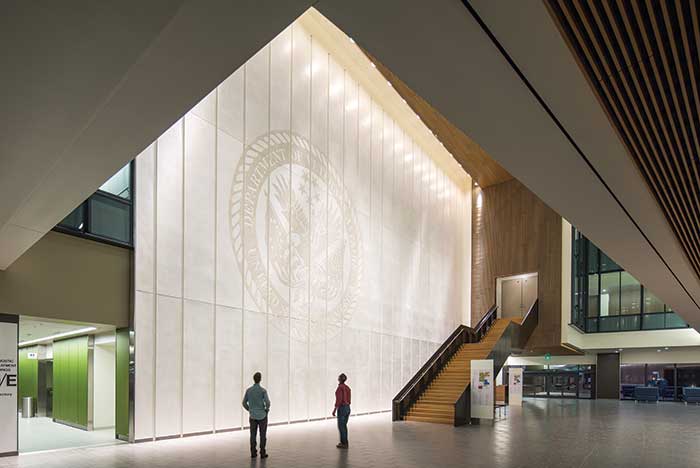 Southeast Louisiana Veterans Health Care System hospital in New Orleans is a testament to the lessons learned from Hurricane Katrina.

The new 1.7 million-square-foot Southeast Louisiana Veterans Health Care System hospital in New Orleans is painstakingly designed to honor and provide comfort and care to veterans. In fact, their input was critical to the facility’s final design and layout.

But the hospital also is a testament to the lessons learned from the deadly havoc Hurricane Katrina reigned on New Orleans and the previous VA hospital that was damaged beyond repair in 2005. That made the highest level of resiliency a critical component.

The previous VA health care facility flooded during Katrina, which knocked out its power because the electrical and mechanical equipment was located in the basement, says Ryan Hullinger, AIA, principal, NBBJ. The firm, which served as lead architect, was part of Studio NOVA, a joint venture with Eskew+Dumez+Ripple and Rozas Ward Architects.

“We refer to the new VA facility as an ‘upside-down hospital’ because the electrical and plumbing systems are located at the top of the building — in this case, the fourth floor. By locating critical infrastructure there, it ensures that the hospital can remain operational even in the midst of a flood,” Hullinger says.

Other resiliency strategies include locating the emergency department (ED) on the second floor and at least 21 feet above base flood elevation, according to Clark/McCarthy Healthcare Partners (CMHP), a joint venture of Clark Construction Group LLC and McCarthy Building Companies Inc. Local partners Landis Construction Co. LLC and Woodward Design+Build also were part of the group. The ED has an ambulance ramp that can double as a boat launch in the event of flooding.

The exterior of the building is hardened to withstand projectiles caused by high winds, Hullinger says. In the event of a storm or natural disaster, on-site power generators and water supplies provide enough resources for the hospital to operate for five days without connection to the city power and water grids, he adds.

The facility has enough provisions and supplies to accommodate as many as 1,000 staff and patients for the five-day period, CMHP says. The hospital’s patient rooms can be converted from single to double rooms to increase capacity in an emergency.

“Our team applied lessons learned from Hurricane Katrina to create a resilient hospital infrastructure with an efficient, patient-centered design that will serve up to 70,000 veterans from throughout the region,” says Steve Maslen, project executive, CMHP.

After months of meetings with more than 100 veterans and nearly 200 staff, NBBJ learned what they needed for the new 200-bed facility, says Susan Bower, R.N., principal, NBBJ.

Ease of wayfinding was a high priority. One long concourse extends the length of the hospital and links to color-coded areas in the other buildings on the 34-acre campus where a range of specialized care and other services are offered. Interior design plays a role in other ways, too.

“Because of their [veterans'] higher rate of mental health issues, we avoided blind corners that could startle them, and removed colors, images and patterns that could be a trigger to traumatic events,” Bower says.

Because veterans also suffer from high rates of mobility and bariatric disabilities, waiting room furniture was selected with this in mind. “We also ensured that social spaces were designed so that veterans with wheelchairs and other limited-mobility devices could easily join a conversation and feel a part of the group,” Bower says.

Green zones create  a series of creative landscape buffers between the VA buildings and the existing neighborhood. Building masses and landscape spaces are subdivided and separated to ensure a pedestrian-oriented environment, NBBJ says.

The new medical center will provide a full range of inpatient and outpatient services, including mental health, dental and vision care. The VA is anticipating about half a million outpatient visits annually.

120 viscous wall dampers will help to reduce lateral movement caused by wind and earthquakes and reduce the amount of structural steel needed in new facility.