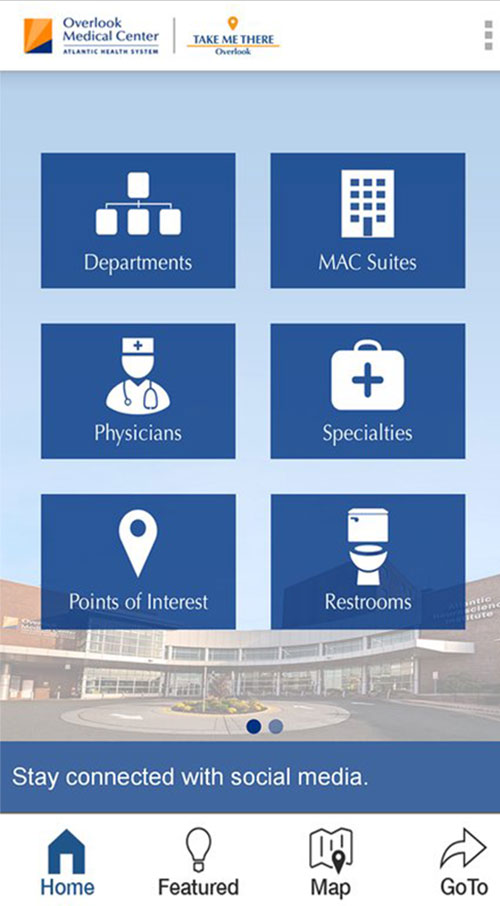 The app took several phases of development and testing before it was ready for launch.

It can be daunting for patients and visitors to find their way through a hospital’s campus. Overlook Medical Center in Summit, N.J., is tackling this problem by offering a downloadable indoor mobile GPS system to help people reach their destinations.

Overlook, which is part of five-hospital regional Atlantic Health System, devised its “Take Me There – Overlook” app after surveying patients and evaluating its physical plant, says Gerard Durney, Overlook’s director of operations.

“No one wants to be in the hospital. Patients are frightened and many times in pain, and their family and friends are concerned. If we don’t make it easier [for people to find their way around], anxiety can build,” Durney says. This anxiety affects not only patient satisfaction, but also patient outcomes and quality.

“It was a huge undertaking to do this. You have to determine where users will go, and then test the app repeatedly. If it’s not accurate, people won’t use, it,” Durney warns.

For instance, at Overlook people walk in from the lobby directly to the fourth floor, which can be very disorienting. So, the app needed to tell users that “you’re now on the fourth floor,” he says.

The app includes some advanced features, such as a parking planner that sends users to the best spot based on their appointment location at the hospital, and returns them to that same parking structure. The hospital is refining this feature further so that, by 2017, the app will return each user to the exact location of his or her car.

Read more about the app from our sister magazine, Hospitals & Health Networks.

Hospital launches app to assist visitors in finding their way