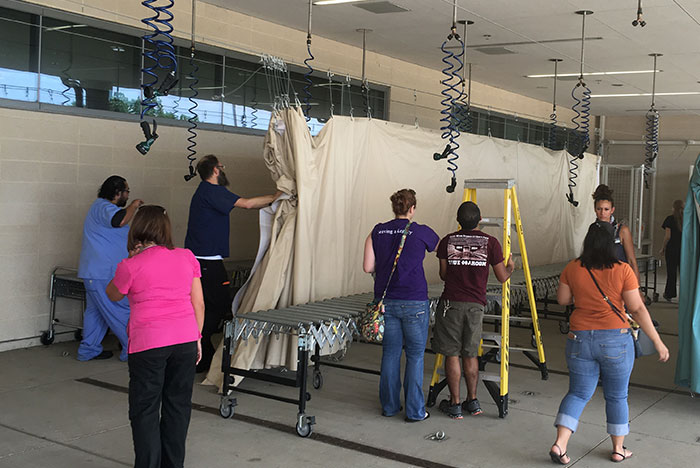 When an explosion rocked a manufacturing plant just south of Dallas in 2004, some employees were taken to Parkland Memorial Hospital because of a concern that they potentially were exposed to a cyanide release. The incident caused the health system to develop a mass casualty decontamination team.

The decon room and team at the new 1.7 million-square-foot, 862-bed Parkland Memorial Hospital meet and go beyond what the state and Joint Commission require. The Texas Department of State Health Services requires that hospitals maintain a decontamination room though not a team.

The Joint Commission requires hospitals to identify hazards and address them. Because Parkland identified the potential to receive contaminated patients as a hazard, it created the decon team to provide a solution.

The team includes a disaster-management staff, which is responsible for overseeing decontamination activities, including the training of team members who may be called into service at a moment’s notice.

Like other hospitals, Parkland receives a notification from first responders who alert them when a patient may have been exposed to hazardous materials. Patients may be decontaminated in the field or at the hospital. 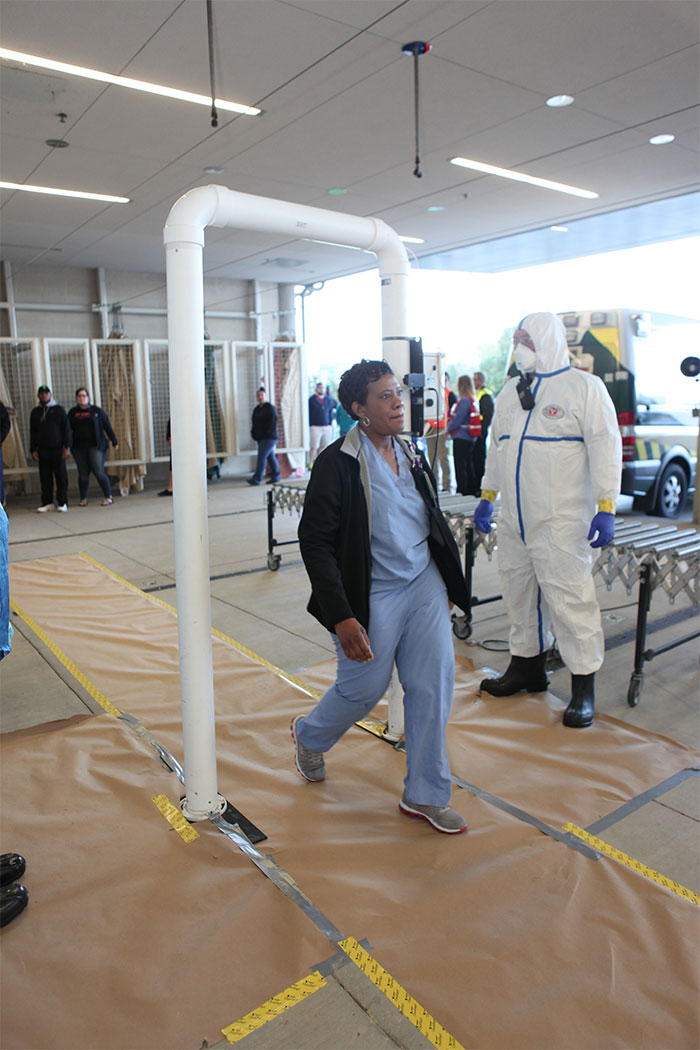 Parkland employee being screened for radiation contamination during an emergency drill exercise.

Located near the hospital’s emergency department (ED), but not within it, is a room in which uas many as 10 patients can have their clothes removed and be thoroughly scrubbed with soap and water before receiving hospital-issued gowns and taken to the ED.

Should an event take place during which more than 10 are exposed to hazardous materials or contaminated, Parkland is equipped with an exterior decontamination unit complete with privacy curtains and running water where patients can be washed. Members of Parkland’s decontamination team staff those areas.

While the unit is prepared to respond in the event of a terrorist attack, contamination is more likely to occur from a natural disaster or an incident involving household chemicals.

“Although there are terrorist-type activities that can lead to exposure to or contamination from hazardous materials, it’s more likely to be the result of a natural disaster or accident,” says David McCarty, an emergency management officer at Parkland. “A tornado or a flood could wipe out a chemical plant or an accident at home could result in a dangerous situation."

McCarty cited household cleaning items such as ammonia and bleach that when used separately pose no threat, but when combined can emit fatal chlorine gas. He stressed the importance of reading labels to ensure the safe use of all products.

“And, just because it may say it’s ‘all natural’ doesn’t mean it couldn’t be harmful if used incorrectly,” he notes.

There are approximately 100 staff members from throughout the Parkland health system who have received classroom and hands-on training, and respond whenever the decon team is activated.

Team members are taught how to don and doff personal protective equipment such as gowns, boots, gloves and masks, including those with self-contained filtration systems. They are also instructed in how to safely and thoroughly rid contaminants from patients.

Jennifer Ochieng has been a member of the decontamination team for two years. She serves as an infection preventionist at Parkland and has a background in health care emergency management.

“Just a few months after I joined the decon team, Ebola hit Dallas and my involvement was critical at that point,” Ochieng said.

Rudy Vasquez Jr. has served on Parkland’s decon team for eight years and credits Parkland’s administration for valuing the unit’s preparedness. “Leadership has recognized the importance of this team and has supported us throughout,” he says.

The new 17-story Parkland Memorial serves as one of the largest teaching hospitals in the U.S. It is one of Dallas's four Level I trauma centers and a primary care center for Dallas County residents.