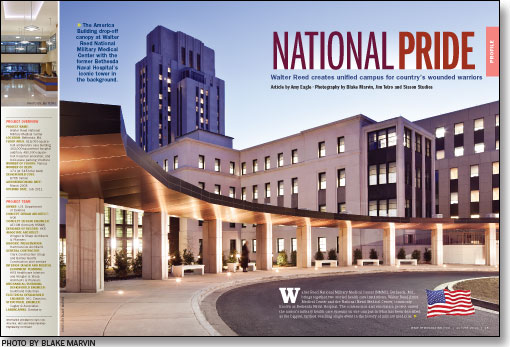 "The simple fact that the services that we're providing are all in a singular location is a huge benefit to our wounded warriors and their families," says Captain David A. Bitonti, D.M.D., U.S. Navy, who served as chief of staff for integration and transition, Walter Reed NMMC.

Bitonti says it was a challenge to be "building a hospital while operating a hospital during an active war," but two priorities kept the project focused: patient and staff safety and Joint Commission readiness. "We maintained both of those throughout the entire process," he says. 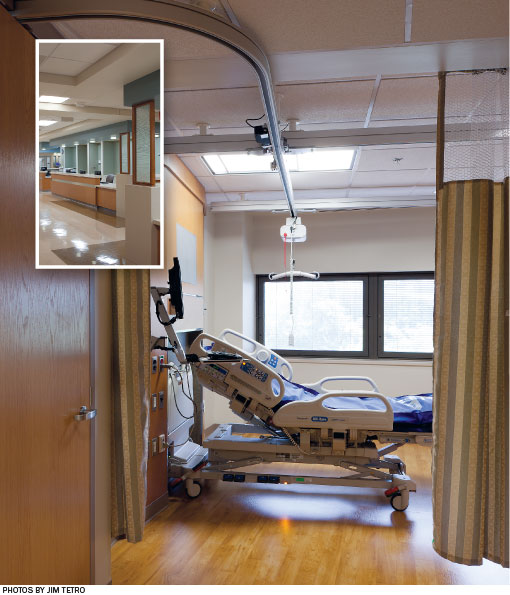 For Patients and Caregivers. Right: The hospital has 110 new single-patient rooms that include built-in headwalls, private bathrooms and patient lifts. Inset: The evidence-based approach led to nursing and charting stations that reduce walking distances.

The campus features an iconic tower from the original Naval Medical Center, designed by consulting architect Paul Philippe Cret from a rough sketch by President Franklin D. Roosevelt. The tower, which is listed on the National Register of Historic Places, is "Washington's only skyscraper," says Bill Hellmuth, AIA, LEED AP BD+C, president, HOK. "It's part of our national psyche, and it's a pretty important building in terms of the history of health care. It's incredibly important to respect that."

Over the years, some large buildings have been added to the medical center that are robust health facilities but not very compatible with the original design, Hellmuth says. One major goal of the Walter Reed NMMC project was to create a campus that worked well from a programming standpoint and appeared as a unified whole.

Two new structures, an ambulatory care facility called the America Building and an inpatient facility known as the Arrowhead Building, were built on either side of the hospital tower, adjoining existing medical center structures. The symmetrical design sets off the tower as the central element of the campus and places medical services in locations that relate well to existing departments.

To preserve the appearance of the historic facility, the height of the America and Arrowhead buildings could not exceed that of the original hospital wings. The two new buildings have the same front elevation, but they are quite different structurally; the six-story America ambulatory care facility is made of concrete and the four-story Arrowhead inpatient facility has a structural steel frame.

The use of structural steel allowed the inpatient building to have a floor-to-floor height of 14 feet, 10 inches, compared with the 12-foot, 6-inch floor-to-floor height of the ambulatory care building, explains Joe Hogan, vice president, Clark Construction, project director of the Clark/Balfour Beatty joint venture. Steel also was determined to be the best support for a section of the inpatient building that cantilevers over an existing structure.

As the builders were procuring steel for the inpatient building, they were able to proceed with the concrete operation for the much larger ambulatory care facility. "We wanted to be in the ground within four-and-a-half months of award, so as soon as we had design under way, we broke it up into packages," Hogan says.

The America Building outpatient facility has a spacious, multistory lobby and a central light well featuring a hardscape sculpture and a mosaic tile mural. Clinic waiting areas surround the light well, which provides natural light throughout the building. The light well also serves as a point of reference for wayfinding. "[It's] a very good experience for the patient. Very simple for them and very elegant," says Brent Willson, AIA, FHFI, associate principal/senior vice president, HKS.

The America Building has a number of sophisticated rehabilitation environments, including a gait lab that can create three-dimensional images of patients' movements using motion-analysis equipment; a computer-assisted rehabilitative environment lab that allows patients to practice using prosthetics in virtual reality settings; and a computer-based firearms training simulator lab.

Willson says the clinical staff, designers and builders worked together to incorporate technologies that were evolving as the project was under way.

'Everyone has a piece'

"We had a great sense of pride building this facility," says Hogan. Bitonti believes the entire country should share in this pride. Walter Reed NMMC bills itself as the nation's medical center. "We mean that truly," he says. "Everyone in the nation has a piece of what we accomplished here."

Amy Eagle is a freelance writer based in Homewood, Ill., and a regular contributor.

The Walter Reed National Military Medical Center project involved a major expansion and renovation of the existing National Naval Medical Center. "We were adding onto this building in an active, working hospital," says Brent Willson, AIA, FHFI, associate principal/senior vice president, HKS, Dallas. "Minimizing disruption so patient care was not affected during construction was very important to the entire team."

Renovation and expansion were planned carefully with hospital staff. This included setting up appropriate exit procedures, performing infection control risk assessments, controlling dust and noise, and maintaining proper barriers and construction zones under negative pressure, according to Curt Eisenhower, principal engineer, Southland Industries, Garden Grove, Calif. "When you get into renovation, it's 80 percent plan and

Flexibility on the part of the design and construction team and input from clinical staff reduced the project's impact on patient care, says Captain David A. Bitonti, D.M.D., U.S. Navy, chief of staff for integration and transition during the project. Project stakeholders met regularly to develop plans, such as the phased renovation of several floors of existing semiprivate rooms into private rooms. In this case, says Bitonti, some portions of the renovation proceeded vertically and others horizontally, depending on what made the most sense for patient care.

When it was determined that neonatal intensive care patients would be served best by remaining in place during renovation, the builders initiated experiments to measure the noise and vibration caused by common construction tasks and such events as dropping tools from ladders. They used this information, along with the advice of neonatal experts, to help understand what disturbances patients could tolerate and what potentially could be harmful.

About 265,000 square feet of renovation encompassing 30 departments was accomplished in eight months. "We were turning over these departments with near zero punch lists," says Hogan. "As a team, we recognized these were going live."

Everyone on the team was committed to the mission of building a world-class hospital for the country's wounded warriors, says Joe Hogan, vice president, Clark Construction Group, Bethesda, Md., project director of the Clark/Balfour Beatty joint venture. "We worked as an integrated project team focused on solutions, and it really lent itself toward a very efficient process."

Traditionally, a project of this type might take a year or two to design, plus about four months of solicitation and another two to three years of construction, but using design-build, major construction for the Walter Reed NMMC project was completed in 29 and one-half months, says Hogan. "I don't think this job could have been done under any other delivery method," he says.

Tom Briggs, AIA, principal and project manager, HKS, Dallas, agrees the project could not have been completed as a normal design-bid-build project. He says input from builders helped resolve constructability and cost issues early on.

For example, the team installed an innovative heat recovery system using enthalpy wheels to exchange energy between exhaust and incoming air. The system is highly efficient and provides 100 percent outside air. And, because it uses two ducts (supply and exhaust) instead of the standard three (supply, return and exhaust), the system was easier to install in the limited space above the medical center's ceiling.

Eisenhower says design-build allowed the team to use building information modeling "to get all the systems integrated into what was a very tight space."