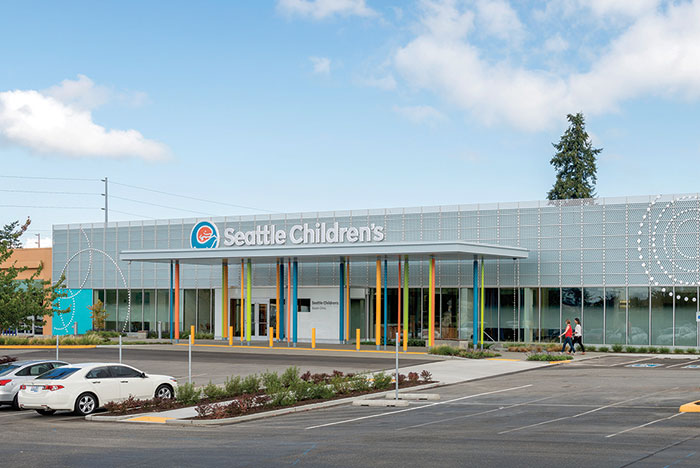 The children's hospital expands its reach with a new clinic repurposed from a retail store.

When Seattle Children’s Hospital wanted to open a new pediatric clinic in a community about 20 miles south of the main medical campus, the health system discovered a scarcity of land on which to build a new facility. Plus, there were no available medical office buildings that offered an option.

The solution was to move into a vacant, 37,000-square-foot retail space in the desired location and with visibility from a nearby interstate highway.

The adaptive reuse project was a first for Seattle Children’s and ZGF Architects LLP, Seattle, so both were entering unknown territory, so to speak. That and the need to maintain the health system’s level of excellence provided plenty of incentive to make it work, says Victoria Nichols, principal, ZGF.

“Seattle Children’s has a strong brand, they have beautiful facilities and we didn’t want to create something that was less than meeting their standard,” Nichols says.

Any fretting over the outcome was unnecessary, says Mandy Hansen, director of facility planning, design and construction, Seattle Children’s, adding that the project has been a resounding success and has met all objectives.

“I think it turned out great. The location is working well for us. We created an easily accessible site and we feel as though it’s a good place for families to go to access care. It’s in the region where care is needed,” she says of the clinic, which opened about a year and a half ago.

The project had challenges common to an adaptive reuse, chiefly the need to upgrade the infrastructure, including the mechanical and electrical systems. Installation of an information technology system and some medical gas equipment was required, Nichols says.

The former big-box store provided little natural light, which required cutting openings in the exterior for additional windows and for a larger door at the front entrance. A decorative aluminum façade helped to give the exterior a fresh, new look consistent with the Seattle Children’s brand, she says.

The open interior offered ample flexibility, enabling the design team to establish a modular layout used at other clinics in the system that optimized efficiency. Input from clinical staff helped to guide designers, Nichols says.

As many as 10 exam rooms were installed around team share spaces where physicians, caregivers and administrative staff work together, Nichols says. The design maximizes patient throughput and serves to enhance communication among staff, she adds.

Using existing retail space rather than building a new facility shaved about 2.5 percent from the cost of the core and shell, Nichols says. A retail lease saves the health system money too, an important factor in choosing the site, Hansen says.

“We’re very happy with it. All in all, it’s been very successful,” she says.