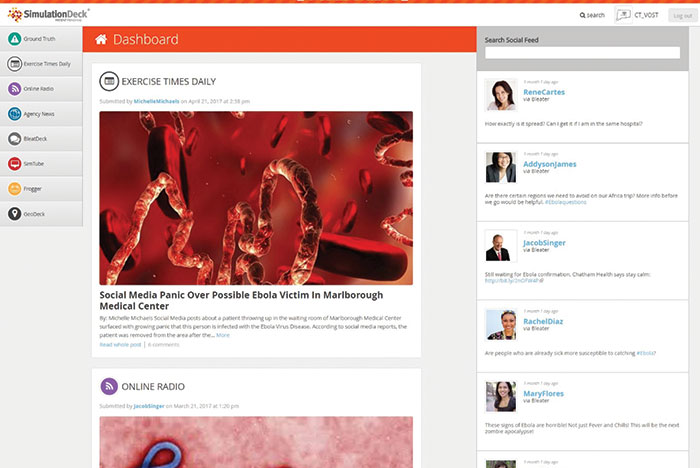 The exercise was held when the council determined after the 2014 Ebola outbreak that public health stakeholders in the Hartford area lacked access to personal protective equipment and actionable intelligence for an effective response to a public health crisis.

The council worked with state partners and Hartford communities to develop a ConOps that integrates the state’s Division of Emergency Management and Homeland Security’s Region 3 partners, including hospitals, public health and emergency management agencies.

The goal was to establish emergency preparedness for HCDs that may require specialized care, isolation or quarantine, and declaration of a public health emergency. Once completed, the council wanted to test the ConOps plan in a realistic situation to ensure that it adequately addressed the previously identified emergency response deficiencies with the public health department and hospital systems.

It consulted with Tetra Tech Inc. in Chicago and Nusura Inc. in Denver to design a realistic, full-scale HCD exercise that would allow participants to test ConOps field elements in combination with notification and public information processes.

Twenty-seven Connecticut hospitals, health departments and other agencies participated in the test run, which centered on a hypothetical case involving medical personnel returning to Connecticut after responding to an Ebola outbreak in West Africa. Among the area health care facilities that participated were Manchester Memorial Hospital, Hartford Hospital and Marlborough Medical Clinic.

The use of SimulationDeck helps Hartford area hospitals and health care facilities to comply with emergency communication requirements and guidance from the Joint Commission, Department of Health & Human Services Hospital Preparedness Program and the Centers for Medicare & Medicaid Services Emergency Preparedness Rule.

As the exercise progressed, “rumors” from area residents began to appear on social media and video blogs, while speculation from newspapers and radio news broadcasts heightened public concern about the threat of a possible Ebola outbreak in the United States.

In response to what they were reading on the simulated internet, the participating health departments and districts practiced using the new ConOps to coordinate Ebola-related response and information management activities. They included posting answers to questions and other messages to their own social media accounts and web pages in real time.

The Connecticut Virtual Operations Support Team also was involved in the exercise, helping hospitals to monitor the synthetic social media accounts for misinformation, trending topics or questions that would assist health care providers in tailoring their messages.

“During past exercises, our attempts at mock media playing either through a SimCell or face to face were woefully inadequate, never yielding sufficient outputs to identify strengths or areas of improvements for our exercise participants,” says Carmine Centrella, program director, Capitol Region–Metropolitan Medical Response System.

“With the use of SimulationDeck for our high-consequence disease exercise, our participating organizations received outstanding simulation media play,” Centrella says.

As a result of the test, the Council validated the emergency response plan and identified ways to make regional coordination even more effective.

Hospitals have until November to prepare for new CMS rule