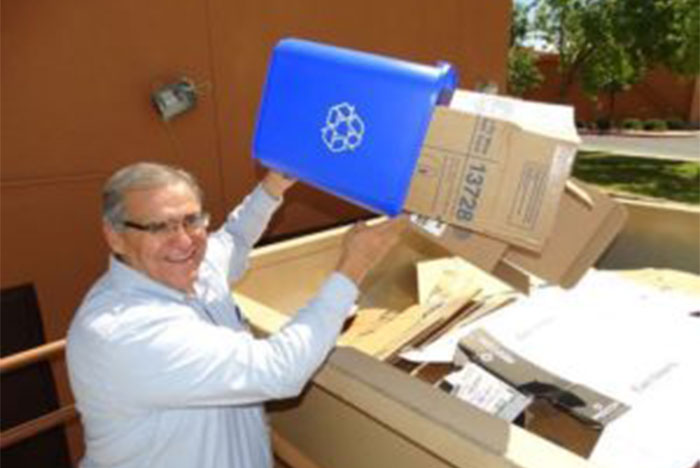 Gilbert Apodaca, administrative director at Memorial Medical Center, uses one of the new blue bins to top off recyclables in the rolloff container.

In a mere 30 days, Memorial Medical Center (MMC) managed to triple the amount of material it recycles each month. The 200-bed hospital — which serves a population of 300,000 in the Las Cruces, N.M., area — recently partnered with the South Central Solid Waste Authority (SCSWA) to expand its waste-diversion efforts.

Tarkeysha Burton, recycling coordinator for SCSWA, met with hospital personnel in early spring to assess its practices. At the time, MMC was only recycling cardboard coming out of deliveries to its food service operation. Burton says that many on the hospital’s staff recycle in their own homes and had expressed a desire to continue that practice in the workplace.

“We went through their entire facility,” Burton says. “We went floor by floor and determined which areas had the best possibility for expanding their recycling and waste diversion.”

In addition to recycling cardboard waste in its food service operations, MMC now has placed 102 bright blue recycling bins throughout its facility for recycling plastics, shredded office paper and metal cans. Burton says the hospital used to recycle only 1 to 1.5 tons each month. It now recycles 3.2 tons of material after only its first month of expansion.

The increase in recycling has been coupled with few workflow modifications.

Previously, no staff outside of the custodial department took part in recycling. Today, however, bins are placed within each nurses’ station and in staff lounges. Patients also have access to recycling bins in the hospital’s lobby. Custodial staff, too, have seen a few changes.

“The previous recycling containers weren’t easily accessible,” Burton says. “The custodial staff had to cart the cardboard out and drive to the dumpster and drag it to a different area. Now it’s in a loading area so they can easily move things throughout the hospital.”

SCSWA created signage specific to the hospital’s needs to designate what can be recycled and where. Burton also conducted on-site training to review misnomers about what can and cannot be recycled and why. Burton says they also reviewed the true underlying reason for the program.

“Our state has a waste-diversion goal to reach 75 percent of waste diverted by 2020 and the hospital can assist in reaching that goal,” Burton says. “As an entity of our city, they are committed to keeping the community clean and green, so we made sure to cover that in our training.”

The hospital expects to save $3,241 per year at a minimum, but expects that savings may increase as more staff adopt the program into their regular workflow. John Harris, Memorial Medical Center CEO, says that he hopes the program’s success will inspire other hospitals to follow suit.

“This all boils down to doing the right thing,” he says. “Recycling is the right thing to do, and MMC wants to set an example for hospitals around the state and beyond.”

Gundersen's recycling pays off in more ways than one