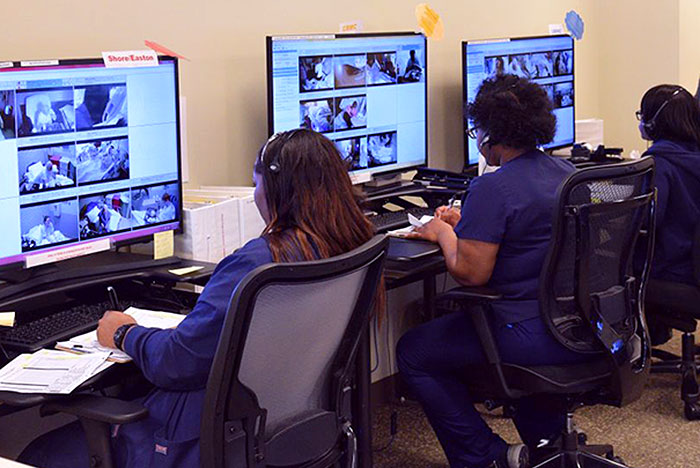 Video monitoring — sometimes referred to as telesitting — has improved patient safety at the University of Maryland Medical System (UMMS), while reducing the need for and cost of nursing assistants typically assigned to watch at-risk patients in their rooms.

Instead, observation technicians located in a building near the University of Maryland Medical Center in Baltimore watch a large, split-screen monitor with 10 video feeds, each focused on one patient.

The patients are spread across six of the 12 hospitals that comprise the UMMS and are in varied settings, including emergency departments (EDs) intensive care units (ICUs), pediatrics and medical-surgical floors. Some have delirium and are at risk of falling. Others are being watched for suicidal behavior or risk of seizure.

When the observer sees a patient in danger, she engages with the patient via two-way audio, while speed dialing a nurse at the scene to intervene. If the patient doesn’t respond immediately, an alarm is sounded on an in-room device and nurses are summoned.

It’s the latest innovation in telehealth services at UMMS, already nationally known for its remote ICUs, as well as remote stroke care, genetic counseling and behavioral health. The monitoring staff are located in a room adjacent to the tele-ICU facility known as the eCare Center.

The system, which is made by AvaSure, Belmont, Mich., includes a portable cart or wall-mounted device with a camera that can monitor the entire patient room, even in darkness, and has zoom capability for a closer view.

The audio comes with prerecorded messages in more than 200 languages for non-English-speaking patients. An electronic privacy option is used to block visibility during an exam or while patients are dressing. The video feed is not recorded.

“I think it’s a huge advance in patient safety, and we are seeing more nurses and doctors considering putting patients on camera instead of diverting staff resources used for patient care to sit one on one with a patient,” he says.

The system is in use in more than 400 hospitals nationwide, but UMMS is one of the pioneers in the hub-and-spoke model of centralized observation for a multifacility system. With 65 room units operational, it has ordered 16 more, and Zubrow thinks that the program will grow as more at-risk patients are placed on video monitoring. 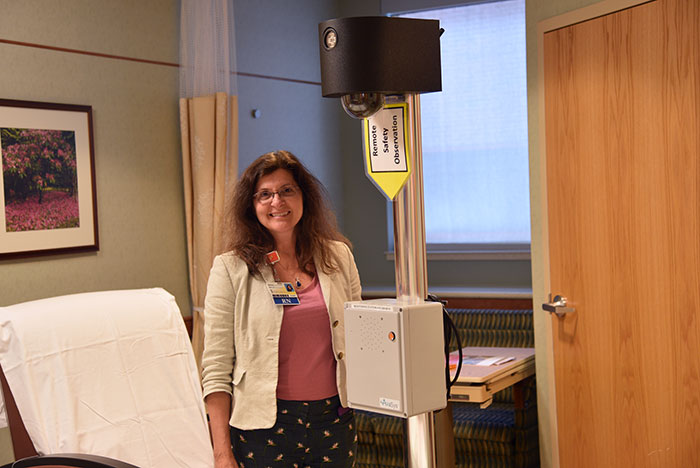 Grace Serafini, R.N., director of nursing, St. Joseph Medical Center with portable cart with a camera that can monitor the entire patient room, even in darkness, and has zoom capability for a closer view.

“The telesitter program is a new innovation in our hospital system that positively impacts the safety of our patients through continuous remote observation,” says the medical center's Tina Cafeo, vice president of nursing and patient care services and associate chief nursing officer.

Monitors have caught a patient trying to set his room on fire, another trying to rip out a breathing tube in the ICU, and a patient in the traumatic brain injury unit of a rehab hospital becoming aggressive with a nurse. Most of the patients being monitored are at risk of falling.

“We have learned how fast a patient can go from being in bed to falling, so we are learning the signs of when they begin to think about getting up,” says Marisol Tobaldo, supervisor of the Safety Observation Program, commonly referred to as the Telesitter Program.

At the University of Maryland St. Joseph Medical Center, Towson, Md., cameras monitor potentially suicidal patients who are in the ED.

So far, patients and their families support the system. “We tell patients that someone really is watching them, and they’ve been very comfortable with it,” Serafini says.

Families love the program, knowing that someone is watching their loved ones at all times, Tobaldo says.