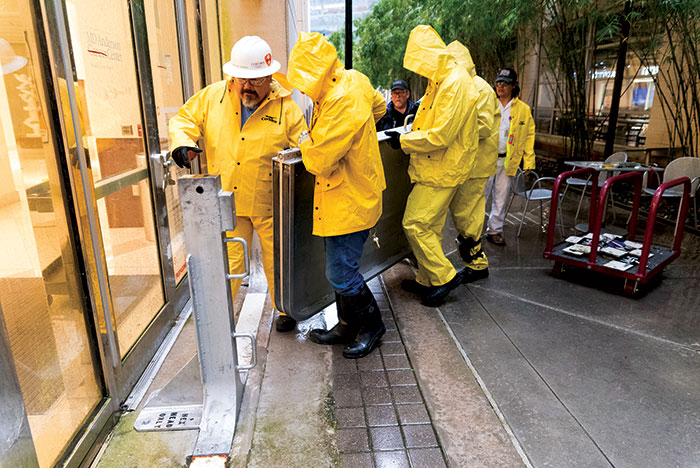 It’s amazing what a difference 16 years can make. For some large hospitals in Houston that experienced massive flooding and loss of medical equipment and research materials in Tropical Storm Allison, the outcome of late-August’s bout with a storm of epic proportions was a testament to smart planning.

The mostly positive outcome for hospitals at the Texas Medical Center, which were badly damaged by Allison but left largely unscathed by Hurricane Harvey, was not happenstance. The resiliency that kept the facilities nearly bone dry while the streets outside the hospitals turned to rivers was the result of hardened infrastructure borne out of judicious preparation and investment — and lessons learned.

“When you consider the magnitude of this storm, hospitals prepared really well not only in terms of the management of their staff and how they moved patients when necessary, but with the investment made by facilities themselves and their emergency preparation over the years,” says Lance Lunsford, senior vice president for marketing and business development, Texas Hospital Association.

Key among actions taken by hospitals after Allison in June 2001 and Hurricane Ike in September 2008 was a substantial investment in specially designed flood walls and flood gates that prevent water intrusion from the outside or within the interior.

Over the years, some Houston hospitals have moved critical equipment such as emergency generators, information technology equipment and electrical systems from basements and lower levels to upper floors, facility professionals say.

Even the relatively small number among the 250 or so Houston area hospitals and health facilities that were forced to evacuate patients or close because of severe damage provided medical care for as long as they could. No patients died while either being transferred or hospitalized during the storm, officials say.

Recovery by even the 27 hospitals forced to temporarily close was rapid. Within two weeks of the storm, an estimated 95 percent of all health care facilities in the metropolitan area were open, says Darrell Pile, CEO of Southeast Texas Regional Advisory Council, Houston.

“We led disaster preparedness and exercises over recent years and, together with providers, we put those emergency plans into action during the storm,” Pile says.

The result was that care was delivered by hospitals despite dire conditions outside.

“The care that was provided by hospitals was extraordinary even if they were having hardships of their own. Care was continuously delivered safely,” he adds.

The foresight of Mark Kenneday, vice chancellor of campus operations, University of Arkansas for Medical Sciences, and president of the American Society for Healthcare Engineering of the American Hospital Association in 2013, greatly impacted hospitals in the Houston area.

Kenneday was director of engineering and maintenance at Texas Children’s Hospital in Houston when Allison hit. At his urging, the hospital invested in a flood mitigation system that featured watertight submarine doors that could be operated by an 80-pound nurse, he says.

The hospital stayed dry during Allison while others connected to it by tunnels were ravaged by flooding. Those same and other hospitals at Texas Medical Center have since incorporated similar flood-control steps.

Meanwhile, as the city of Houston and those hospitals damaged by Harvey regain their footing, many hospitals impacted by Hurricane Irma in Florida and elsewhere in the Southeast were returning to regular operations, reports stated.

Hospital officials again credited efforts to strengthen their facilities for the quick rebound.