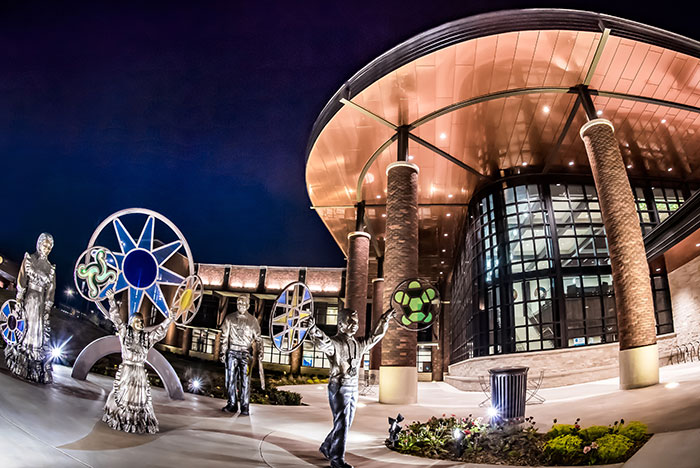 Of the many dramatic design elements on the campus of the new Choctaw Nation Regional Medical Clinic, these bronze sculptures stand out.

When guests arrive on the campus of the new Choctaw Nation Regional Medical Clinic, many elements may catch their eyes but these bronze sculptures stand out.

A woman, man and two children in modern Choctaw ceremonial dress gather, holding colorful symbols. At first glance, it appears as though the man and woman are married with two children, but a closer look tells a different story.

The man’s clothing with the colorful embroidery says that he is married, while the woman’s clothing illustrates that she is single with no children. Despite the fact that these people are not related in a traditional sense, the sculpture is still titled “Chukkachvffa,” or “family,” because they have one very important thing in common: their Choctaw heritage.

The sculpture, by artist Matt Placzek, is a symbolic gathering to share the message: We are Choctaw. We are one.

The planning session with Placzek was actually prior to the design phase, allowing many of the interior design elements of the facility to echo themes in the sculptures such as the circles themselves and the symbols within the circles. Traditional Choctaw beadwork inspired the designs for the symbols and now have been incorporated into the facility’s signage.

Health care developments are being designed to provide a longer and better quality of life.

The nation's Most Wired hospitals revealed

Choctaw Nation Regional Medical Clinic is the flagship facility of a 20-acre development.