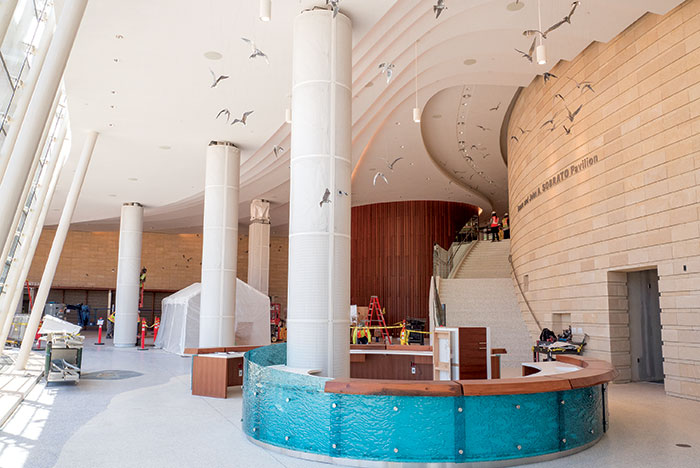 The Lucile Packard Children’s Hospital Stanford, Palo Alto, Calif., aims to be both sustainable and fun­.

The new Lucile Packard Children’s Hospital Stanford, Palo Alto, Calif., scheduled to open in December, endeavors to pay tribute to the facility it expands upon, while incorporating modern medicine in a highly sustainable building.

Designers also took great measures to make being in the hospital as enjoyable as possible for staff and building.

The 521,000-square-foot facility almost triples the size of the existing children’s hospital building next door and seamlessly reinterprets its terra cotta palette and use of stone from a Stanford-owned limestone quarry for construction, says Robin Guenther, principal, Perkins+Will, which designed the facility with architecture and engineering firm HGA.

The new hospital represents about 10 years of planning that involved input from the health care system’s clinical staff along with architects, construction manager DPR Construction of Redwood City, Calif., families and even kids.

It has six new surgical suites, including a neuro-hybrid operating suite with direct access to 3 Tesla magnetic resonance imaging (MRI), which offers highly advanced clarity. Other technology includes a hybrid cardiac operating room (OR) suite and a combination MRI/OR/interventional radiology suite. A room also was built to provide sensitive I-31 metaiodobenzylguanidine, or MIBG, radiation therapy for children with high-risk cancer, putting the hospital among an elite group to offer the treatment.

While advanced medical technology and clinical care are the hospital’s primary engines, it has been designed to be a sustainability powerhouse, too.

“We really looked at a way to innovate this building above and beyond anything that had been done in the state of California up to this time. Hospital and board leadership wanted to be on the leading edge of innovation,” Guenther says.

Underground cisterns were built to store rain water and mechanical system condensate for irrigation of the 3.5 acres of outdoor gardens and additional planters located on nursing unit patios for staff, patients and families.

Combined with water-efficient landscaping, the hospital projects savings of 800,000 gallons a year, which along with low-flow plumbing fixtures, equates to 38 percent less water used compared with a similarly sized hospital.

Proximity to a high-efficiency central plant recently built for the Stanford University campus will help to reduce thermal energy consumption by about 60 percent compared with similarly sized hospitals in the region, according to Stanford Children’s Health.

And then there’s the fun stuff that can be found around nearly every corner of the hospital starting with bronze sculptures of native animals that greet patients and visitors at the entrance.

A nod to the various local eco-regions is extended on every floor through art renderings and informational walls. The public elevator bank is clad with reclaimed old-growth redwood.

Near the lobby, an interactive video display about 20 feet long and 10 feet high responds to every move a child makes with images of fish swimming, rain falling and much more.

The story corner, which includes space where special visitors such as athletes and entertainers can be recorded and shown on TVs in children’s rooms, is another highlight, Guenther says. Next to it is a broadcast studio where interviews by and with children can be conducted.

It’s all a part of offering the best experience possible, Lund says. “A children’s hospital is very different from an adult hospital. Children need to heal, play and learn. Those are the three jobs that children have,” he adds.

Lucile Packard Children’s Hospital Stanford expansion is on track to open in December.