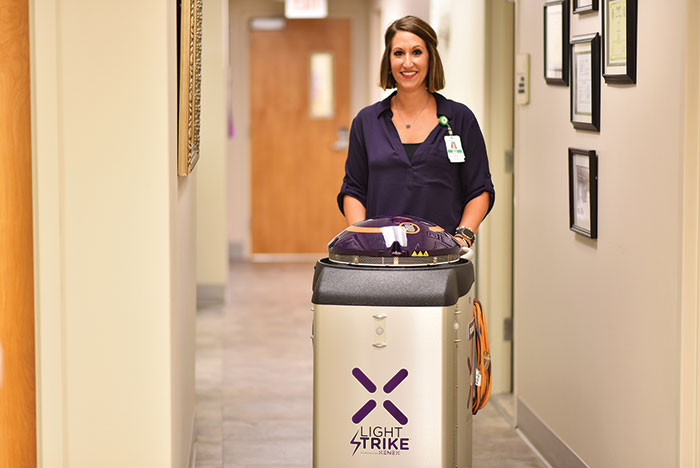 The hospital planned to use the LightStrike robots from Xenex to disinfect the hospital’s intensive care units (ICUs), cardiac care units (CCUs) and operating rooms (ORs). However, when an unexpected decontamination challenge arose in a different area of the hospital, it found an additional and most helpful use for the technology.

The hospital hired an analytical testing company to conduct air and surface sample testing not only to ensure that no contamination remained in the area, but also to ensure compliance with the Occupational Safety and Health Act (OSHA), Section 5(a)(1).

The general duty clause mandates that employers must furnish to each employee a workplace that is free of recognized hazards that cause or are likely to cause death or serious physical harm. A contaminated work environment could be considered a violation.

Pharmacy, as well as hospital leadership, needed a solution to remedy the problem as quickly as possible and reached out to the hospital’s infection preventionist Melissa Mazer.

There were two immediate options: Hire an outside company to come into the facility and decontaminate all surfaces at a hefty cost or utilize the hospital’s recently purchased UV robots.

Mazer knew that the pulsed xenon UV robot was effective against mold, so she brought in one of the units to disinfect the pharmacy office area. After disinfecting the area for two hours, it was retested for any lingering contamination from the flooding. The area was declared safe.

“I was impressed with the robots and even happier with the hospital’s investment when the testing company reported they had never before seen post-contamination results that low,” Mazer says.

The original purpose for obtaining the robots has been fulfilled, too. Surgical-site infection rates have decreased significantly since the robots have been utilized. Infection rates in the first quarter of 2017 were reduced 32 percent and approximately 20 percent in the second quarter, Mazer reports.

“The hospital’s infection rates were already below average and we are very happy that the robots were able to help us bring them even lower,” she says.

“It has been incredibly rewarding for us to see tangible infection-reduction results in such a short time and I cannot wait to see additional results with health care-associated infection-rate reductions throughout our facility,” Mazer says.

She credits Xenex with helping the facility to implement the robots optimally to disinfect units within the hospital, while also monitoring the technology’s use so Forrest General meets its infection-prevention goals.

Operated by the hospital’s environmental services team, the portable robots disinfect hospital rooms in five-minute cycles and ORs in 10-minute cycles without warm-up or cool-down times.

“We want to do everything within our means to provide a clean environment at our facilities to reduce the risk of infections,” Mazer says.