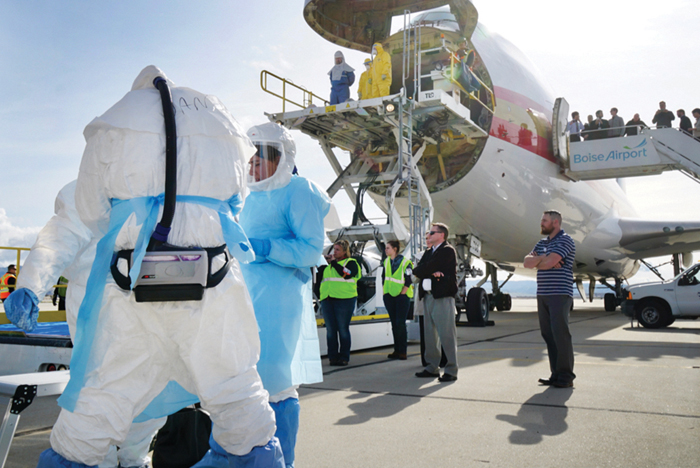 Participants transport a “patient” during the HHS drill.

More than 50 organizations partnered in the nation’s largest drill to move patients with highly infectious diseases. The April event, which was coordinated by the Department of Health & Human Services’ (HHS) Office of the Assistant Secretary for Preparedness and Response (ASPR), brought together a number of entities, including the federal government, regional Ebola treatment centers, local and state health and emergency management agencies, hospitals, airport authorities and other nongovernmental organizations for one common cause: “to test the nationwide ability to move patients with highly infectious diseases safely and securely to regional treatment centers,” according to HHS.

The exercise involved seven people acting as patients displaying Ebola symptoms. The patients, including one pediatric patient, presented themselves at one of five health care facilities in different regions throughout the country. Health care workers at each facility collected and shipped samples for diagnostic tests to state laboratories with each test receiving a positive Ebola diagnosis. Once the tests came back positive, health care staff kicked into gear with isolation protocols, including the use of personal protective equipment (PPE), and transportation to a regional treatment center. Six of the patients were transported by air in biocontainment units. The pediatric patient was placed in PPE and transported by ground ambulance.

“This drill went incredibly well from our perspective,” says Melissa Harvey, R.N., MSPH, director of the division of the ASPR’s National Healthcare Preparedness Programs, which funds the nine regional Ebola treatment centers. “From the angle of Health & Human Services, we were testing the patient movement aspect and that hospitals would be able to receive the patient in their biocontainment unit.”

Some of the treatment centers focused on just receiving the patient and transporting him or her to the appropriate space, while others took the drill a step further by practicing clinical protocols. Although each entity had its own process, Harvey says there were some common lessons learned among the group, such as the need for thorough communication. She says that even though care providers may have the most contact with patients, safely admitting and treating them while containing the spread requires help from nearly every department.

Harvey says HHS is still developing its formal after-action report but hopes that the lessons learned during this drill will help the nation build better health care coalitions. She says the same communication that happens within hospitals needs to happen among hospitals, health care departments and other agencies. The regional Ebola treatment centers were created in 2015 with funding for five years. They are now in Year 3 of the program and are working to ensure that improvements that have been made in handling patients with highly infectious diseases will be sustained even after the funding runs out.

“It’s incredibly important that we figure out how to work with hospitals both at the federal and state level to sustain this investment that we have put into readiness for handling highly infectious disease across the country,” Harvey explains. “There may be one hospital that receives an Ebola patient, but these diseases affect the entire community. We really need to emphasize that it’s not just an individual facility affected, but the entire health care coalition.”

Also this week: Resources to end human trafficking and control the spread of disease outbreaks.