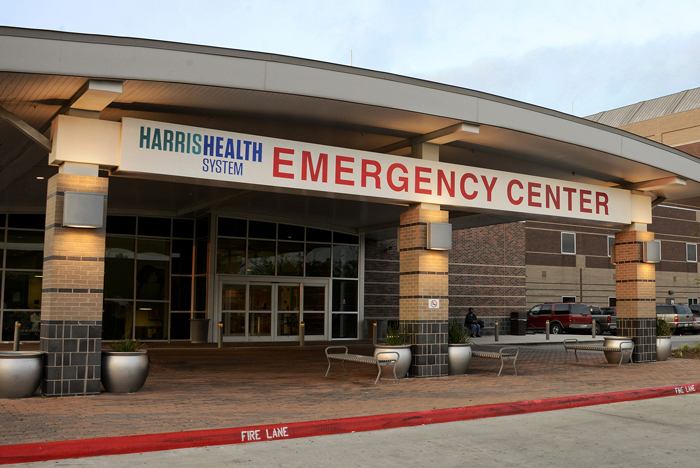 The emergency center team at Lyndon B. Johnson Hospital has reconfigured its space after lessons learned during Hurricane Harvey.

When Hurricane Harvey struck Houston last year, the emergency center (EC) team at Harris Health’s Lyndon B. Johnson Hospital had to come up with quick-on-your-feet solutions.

“During Harvey, we were surrounded by 6 feet of water for five days,” says Alan Vierling, DNP, R.N., NEA-BC, executive vice president. “We started to notice water penetration in our inpatient area caused by the high winds and rain. We lost 133 patient rooms out of roughly 171. The loss of space necessitated relocation and movement of patients within the facility. So, we restructured our space.”

Prior to the hurricane, the hospital’s EC layout was fairly traditional. A waiting room sat at the front with three intake booths for triage. Eight beds were designated for critical care and two 16-bed bays were used for observation and examination. During the hurricane, the EC began using one of its bays as a temporary inpatient unit, reducing its EC space by 30 percent. The smaller footprint caused the department to think differently in terms of patient flow.

“We realized that not everyone needs to lie down in a stretcher. Instead, many can wait in a chair or be examined in a private room, but are then moved to an internal waiting room,” says Kunal Sharma, M.D., EC medical director.

The strategy to keep patients vertical resulted in a 52 percent drop in emergency department (ED) boarding hours, a 29 percent drop in the number of patients who left without being seen and a 22 percent drop in average wait times to see a provider. The results were so promising, that even after the inpatient units were repaired, the EC left the changes in place.

The EC now has a lot more chairs than stretchers, and one of the 16-bed bays that was once used for observation has been permanently transformed into an internal waiting room where lower-acuity patients can wait for results, thereby keeping examination rooms and beds free. The waiting room is now broken into three zones based on patient acuity.

Jonathan Rogg, M.D., associate director of ED operations, says, “Whether it was through changes to our physical space or staffing, our focus was how we can provide the best for our patients.”