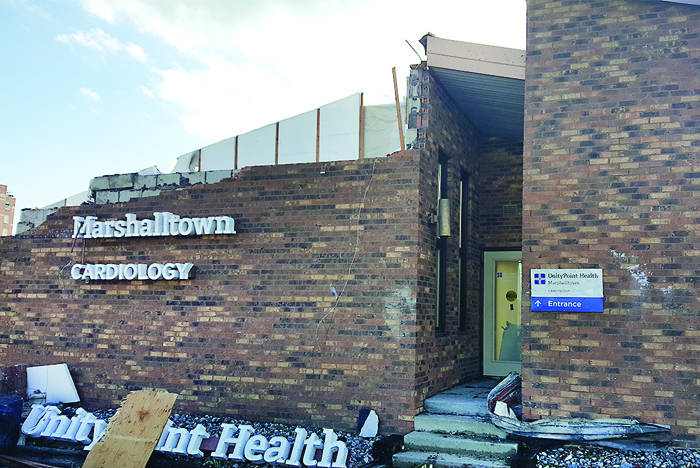 The system’s cardiology clinic relocated to the north campus after being destroyed by a tornado.

When several tornadoes ripped through a stretch of Iowa on July 19, Julie Taylor, an environmental services technician at UnityPoint Health–Marshalltown (Iowa), experienced what is often described as the calm before the storm.

“While I was in the basement of the hospital, it was eerily quiet,” she says. “Suddenly we heard the wind of the tornado and soon learned that it had hit the hospital while we were in the basement. When we finally went upstairs, it looked like a war zone outside.”

Marshalltown was one of the hardest hit cities in the area. The small town of about 27,000 experienced an EF3 tornado with winds measuring 144 mph, according to the National Weather Service. The severe weather devastated much of the city’s infrastructure, including the facilities part of UnityPoint Health–Marshalltown. The health system operates eight sites in and surrounding Marshalltown.

UnityPoint Health–Marshalltown Hospital, also referred to as the north campus, was struck at 4:40 p.m. Once the hospital was alerted by sirens, the staff put tornado-warning policy and procedures into place by moving patients and themselves into safe locations, such as inner hallways. Blinds were pulled down on all windows and blankets were distributed. Ambulatory patients put on footwear in case of falling debris.

“The entire organization stepped up in a time of crisis to care for our patients and community members, following the direction of our leadership team and incident command center,” says Dustin Wright, UnityPoint Health–Marshalltown, vice president of operations.

Once the tornado passed, the health system immediately began assessing damage to its facilities. The north campus completely evacuated its facilities, including 43 patients and several staff, after it was determined that it would be without power for a few days. It also suffered damage to its roof and air handlers, causing the hospital to become very humid and warm within a couple of hours, Wright says.

“We knew this would not be sustainable for days on end,” he explains. “The transfer process was led by our nursing leadership along with physicians/providers assigned to each floor.”

Paper copies of each patient’s health record were placed in envelopes with a patient identification sticker attached to each. All emergency contacts and accepting providers were notified of the transfers. The hospital set up a formalized checkout process to assure identification bands with diagnoses were placed on the correct patients, and that the ambulance service and hospital to which they were being transferred were documented.

As of press time, UnityPoint Health–Marshalltown has reopened several of its facilities, while others continue to undergo assessment and repair. The north campus temporarily relocated such services as its emergency department to other facilities while repairs were made to its roof, windows and air handlers. The hospital has been fully repaired and is now completely operational. The campus also took on one new service. The health system’s cardiology clinic, which was located at its family medicine campus, was completely destroyed. Cardiology services have now moved to the north campus.

As the health system continues to rebuild its own facilities, it has established an employee assistance fund and has raised more than $60,000. The funds have been used by employees like Christina Cheville, a patient access associate,  who was able to move 12 truckloads of debris from her property.

Chad Beebe, AIA, CHFM, CFPS, CBO, FASHE, deputy executive director at the American Society for Health Care Engineering, applauded the system’s efforts and says that being prepared is crucial to recovery. “This story exemplifies the need for careful planning and routine drills,” he says. “It is unrealistic to think that hospitals could be immune to natural events, but the people are what really make these facilities resilient.”

Avista Adventist Hospital's mitigation efforts allowed it to reopen 19 days after the Marshall Fire forced it to evacuate patients.