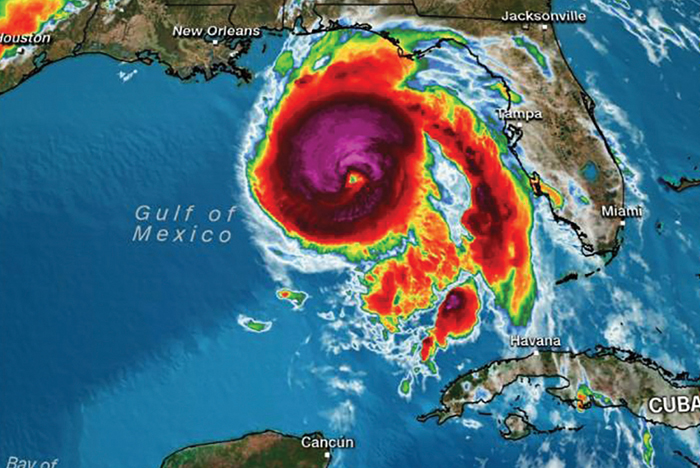 The Category 4 Hurricane Michael touched down in several southeastern states in early October.

Photo courtesy of the National Oceanic and Atmospheric Administration (NOAA)

Hospitals across the Southeast coast have implemented emergency preparedness plans, evacuated patients and are working to repair damage after hurricanes and storms ripped through multiple states.

Hurricane Michael touched down in the Florida Panhandle Oct. 10 as a Category 4. As of press time, overall damage to the state was still being assessed. However, some hospitals already had reported significant damage and evacuations. Gulf Coast Regional Medical Center suspended all services Oct. 11 and evacuated patients. Bay Medical Sacred Heart, which reported significant damage, did the same with the exception of its emergency department (ED). Both medical centers are located in Panama City.

As of press time, Hurricane Michael was downgraded to a tropical storm and continued to travel northeast, touching down in North and South Carolina which are still recovering from Hurricane Florence that made landfall Sept. 14 and poured more than 40 inches of rain in some areas over the course of three days. Moody Analytics estimated damage from Florence at $17 billion to $22 billion.

Depending on the location, however, some areas fared better than others. South Carolina, for instance, was not hit quite as hard as its northern sister. Still, hospitals in the state were prepared for the worst. South Carolina’s Tidelands Health experienced minimal damage. However, it still performed patient relocations on two separate occasions.

“Approximately 100 patients were relocated to hospitals inland,” Devlin says. “Dozens of our staff members, often separating from their own families, relocated with our patients to support their care. Their commitment was tremendous.”

After days of rain, the system orchestrated a second patient relocation, moving patients from Georgetown to Waccamaw after state emergency management officials worried that rising floodwaters would impact public sewer services. The hospital wanted to ensure that it could maintain its ED, however, and brought in restroom and shower trailers plus enough supplies and food to sustain ED operations for several weeks.

In North Carolina, many hospitals grappled with the worst of Hurricane Florence. Julie Henry, vice president of communications and public relations at the North Carolina Healthcare Association (NCHA), says the organization held daily calls with its member hospitals, many of them in rural cities, in the days leading up to, during and after the hurricane to assist in preparation and recovery efforts. NCHA represents more than 130 hospitals and health systems in the state and made several visits to its members.

Henry says a running theme among its members related to the fact that the hurricane hovered over the state for so long. A health system in Wilmington, for instance, sheltered more than 1,800 staff and patients in place for five days. Even though the system had stockpiled supplies, flooding made it difficult for vendors to access the hospitals and restock as supplies ran low. NCHA worked with the Department of Transportation and its members to ensure that vendors could deliver necessities, such as blood products, medicine and food.

Now that Hurricane Florence has passed, NCHA is turning its focus to recovery and resiliency. It has set up an employee-assistance disaster fund with the goal of raising $250,000 to support employees who suffered significant damage to personal property.

It also is working with members to help them identify funding sources from the Department of Health and Human Services and the Federal Emergency Management Agency to rebuild infrastructure and harden facilities in preparation for the next event.

Health care physical environment experts discuss the creation of a new recovery resource and what the world may look like post-pandemic.

From rented trailers to emergency tents, hospitals have deployed a number of resources to handle increased patient volume.