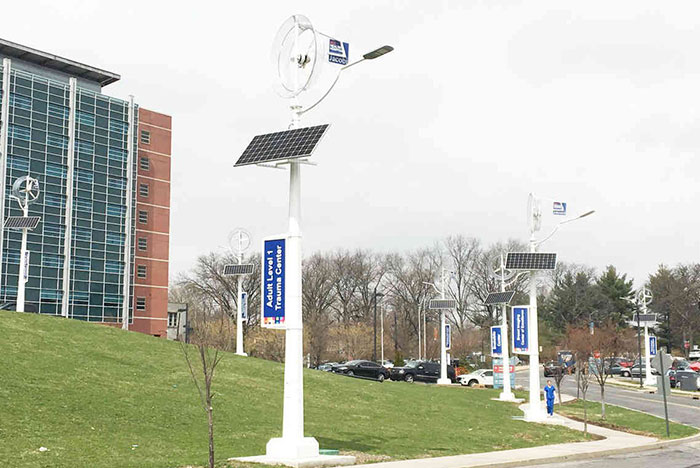 The 22 outdoor lights replace 36 less efficient street lamps to illuminate the campus’ sidewalks and roadways. Each light has a wind turbine and photovoltaic solar panels, allowing them to collect energy on both windy and clear, sunny days.

In the project’s second phase, Jacobi will undergo upgrades to its chiller plant, replace interior lighting with LED fixtures, install building controls and upgrade three air-handling units. The project is expected to last through mid-2020.

The 457-bed hospital is part of NYC Health + Hospitals, the largest public health system in the United States, and its energy-efficiency efforts play into a larger initiative set by the city called OneNYC 2050. The initiative was introduced in 2015 by New York City Mayor Bill de Blasio as an environmental and economic sustainability blueprint that builds on past efforts while looking to the future. One of the goals set by OneNYC is to reduce the city’s greenhouse gas emissions 80% by 2050.

NYC Health + Hospitals has set a target to reduce its system’s emissions 50% by 2025 to help the city reach its overall goal, while ensuring healthy and sustainable facilities for its communities.

“Environmental and economic sustainability must go hand in hand, and OneNYC is the blueprint to ensure they do,” stated Mayor de Blasio in a press release.

Another energy-efficiency project at the health system is the installation of antimicrobial cooling towers at NYC Health + Hospitals/Lincoln, Bronx, N.Y. The towers not only support the HVAC needs of the hospital, but also include antimicrobial features and are expected to reduce energy consumption by 40%.