ASHE reaches across the field to advance advocacy efforts

Association works to ensure codes are unified, up to date and relevant to today's health facilities 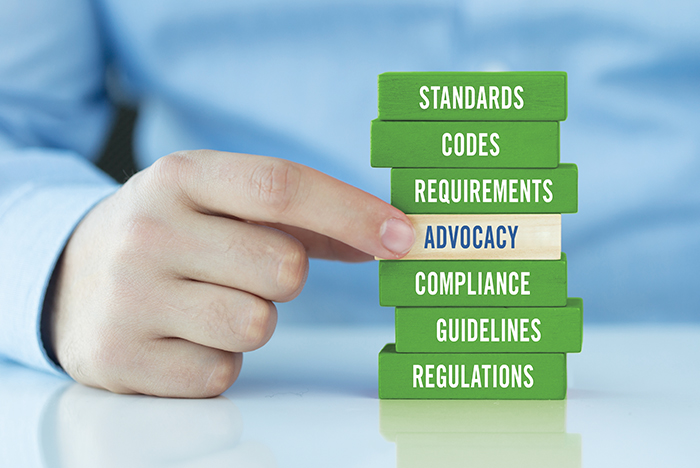 One of the questions frequently asked of Chad E. Beebe, AIA, FASHE, CHFM, deputy executive director of advocacy for the American Society for Health Care Engineering (ASHE) of the American Hospital Association (AHA), is, “Why get involved in the code process?”

The compelling reason for doing so, Beebe says, is that it is one of the few health care regulations that the field has control over.

“Although code references may be infrequently updated by the federal government, it makes a lot of sense to keep the standards continuously updated so that they are ready to be adopted,” Beebe says. “We learn a lot from events that happen, either natural or man-made events, and use that information to improve our codes. We have also been putting countless hours into taking outdated and unnecessary rules out of these codes.”

ASHE updates or adjusts standards as needed through the public consensus-making process, he adds. The federal government’s policy is to adapt these types of standards instead of attempting to write their own.

Unfortunately, the Centers for Medicare & Medicaid Services (CMS) made the already-cumbersome process of updating standards more complex than it needed to by amending some of these standards, such as the National Fire Protection Association’s NFPA 101®, Life Safety Code®, without fully understanding those standards, Beebe says.

Robert Solomon, director of built environment codes and fire protection systems for the Quincy, Mass.-based NFPA, says his organization provided the following information to CMS on this issue: “Under the [Notice of Proposed Rulemaking’s] proposed expansion of the application of the NFPA 101 criteria to facilities with fewer than four beds, providers of one-, two- and three-bed facilities will be faced with a predicament of making costly upgrades.”

“There is a huge implication with this change,” Beebe says. “We used to have a system where you could take a patient in [to a smaller, specialized center] to do some advanced diagnostic imaging services, and we can no longer do that. We have to keep them within the health care occupancy … We have many hospitals that once depended on very advanced diagnostic services, such as an imaging center next door with a linear accelerator. Because of this change, however, the practice of taking patients right next door for advanced imaging is no longer allowed.”

In essence, the federal government disregarded the level of care provided in its mandate that the level of fire and life safety be increased in the smaller facility, he says.

“It’s still important for us to keep moving forward with the code development to appropriately set codes as if the federal government wasn’t involved,” Beebe reports.

ASHE’s work to help unify NFPA 101 with the International Code Council (ICC) family of codes is among the key developments of recent years.

Over the past 11 years, ASHE has worked with the ICC to develop a committee called the ICC Committee on Health Care (ICCCHC), says Jonathan Flannery, CHFM, FASHE, FACHE, ASHE senior associate director of advocacy. This committee is tasked with ensuring the ICC codes are as safe as possible for health care systems, hospitals, ambulatory care, long-term care and assisted living.

The committee has worked over the last three three-year-long code cycles making sure the ICC codes align with the CMS requirements and the NFPA requirements. Doing so is essential because CMS adopts NFPA 101, as well as NFPA 99, Health Care Facilities Code.

When obtaining building permits and constructing health care facilities, state requirements must be followed. According to the ICC, 45 of the 50 states have adopted some edition of the International Building Code, according to Flannery.

“So, you’re building according to the state requirements, and in order to be a health care facility and collect federal funds, you have to meet CMS requirements,” he adds.

If both codes were not followed, he says, “literally what could happen is you would build the facility according to the state, get your certificate of occupancy, and then undergo your accreditation survey and find you’d have to remodel because the codes were different. With this alignment, you no longer have to face this issue. We’re not only working toward alignment, but we also monitor other public proposals and work to align those.”

According to Solomon, NFPA 99 and 101 have evolved “immensely” in the 35 years he has worked with them.

In the past, many of the changes were reactionary responses to terrible fires or other events jeopardizing patients and staff, often resulting in death or injury. However, in the past 12 years, the technical committees working on the codes have been more proactive.

“In other words, we are working to anticipate the next level or type of hazard,” Solomon says. “We are recognizing how treatments rendered in the hospital are much different in 2019 compared to how things were done 20 years ago.”

Previous restrictions on equipment in the corridors that existed eight years ago have been revised not due to a fire or other tragedy but because the equipment is vital to providing quality health care in the modern era.

As a result, many exams, tests and monitoring activities can be carried out at bedside as opposed to having to move the patient to specialized rooms as formerly was the approach. “That test and monitoring equipment now travels up and down the corridors, and that is just one example of how our committees work to address provisions in the ‘real world,’” Solomon says.

Asked if NFPA 101 will become more of a risk-based code like NFPA 99, Solomon replied that it already is “to some extent” a risk-based code. For instance, NFPA knows the probability of an event occurring and the consequence of the event is different in an office building versus an apartment building versus a health care occupancy, he notes. The Life Safety Code applies different requirements for each one of those occupancies. In the health care environment, NFPA 101 works diligently to apply requirements to eliminate or minimize ignition hazards, Solomon says. For instance, it requires electrical equipment to adhere to codes such a NFPA 70®, National Electrical Code®, as well as NFPA 99.

NFPA imposes restrictions on furnishings and the materials on the walls and ceilings of hospitals; requires various types of early warning equipment such as fire alarm systems and active systems like automatic sprinklers to control fires that do start; and recognizes evacuation of hospital occupants is to be avoided at all costs. “Perhaps the most important element in this scenario is the presence of a highly trained staff,” Solomon says.

Some readers may be surprised to learn, he responds, that starting with the 2000 edition of NFPA 101, NFPA launched a performance-based design (PBD) option in the code. That approach requires the designer to have a comprehensive understanding of the goals and objectives listed in Chapter 4 of NFPA 101, and to follow the rigorous evaluation and design procedures contained in Chapter 5, the PBD chapter. Generally speaking, very few buildings in the United States apply PBD for the fire and life safety criteria, Solomon says. “While acceptance of this concept continues to grow not only in the U.S. but internationally, I anticipate it will take us a while to get there,” he adds. “I also expect that PBD will be slow to come to health care design, at least as it relates to fire and life safety-related issues, due to the various inspection levels and protocols that hospitals have to comply with.”

Both ASHRAE and ASHE support ASHRAE 170, a document the two organizations have worked together to create. The document is titled “Ventilation of Health Care Facilities,” Flannery says. “Again, not only do we want to make sure it’s current and supported by scientific evidence, but we want to keep it aligned with changes in other codes, such as the International Mechanical Code and Facility Guidelines Institute.”

The ASHRAE 170 committee has been working to validate the evidence behind the standards and by July expects to complete a monograph documenting future research within health care ventilation, Flannery says.

ASHE is looking at several recommended standards, including Thermal Comfort Clothing and Metabolic Value. “Within the ventilation world, when we look at the amount of air flow coming into a room, we consider what is comfortable for a healthy adult wearing normal clothing,” he says. “Of course, we know people in hospitals are not normal healthy adults.

“CLO — or clothing values — affect what should be worn by health care patients and staff. Think about the staff in the OR. They have their clothes, scrubs and protective gear. The patient, on the other hand, has little on. That’s a big research project we’re undertaking.”

Another project focuses on separation distances, Flannery says. For example, a health care facility’s cooling tower must be at least 25 feet away from outdoor air intake. Facilities want their plume or mist away from a place where it can be drawn into the building, because it could contain contaminants.

Still another concern is the impact of opening doors on pressure requirements within health care settings. Rooms in hospitals are pressurized differently. For instance, an airborne infection isolation (AII) room is negative to the corridor outside it. There could be a tuberculosis patient in that room, so it’s essential the air does not enter the corridor.

“There have not been sufficient studies done to determine what happens when you open the patient room door,” Flannery says. “So that’s a whole study we’ve got to complete. And it will be a fun one, because we know when you open a door you create turbulence and air escape, especially given how often rooms are accessed.”

As ASHE collaborates with other organizations and agencies to ensure the relevancy and consistency of codes and standards, they will continue to play a crucial role in this extremely important aspect of health care operations.

ASHE helps to reduce regulatory conflicts and overreach amidst heightened focus on pandemic preparedness and sustainability.

The importance of ASHE's advocacy work