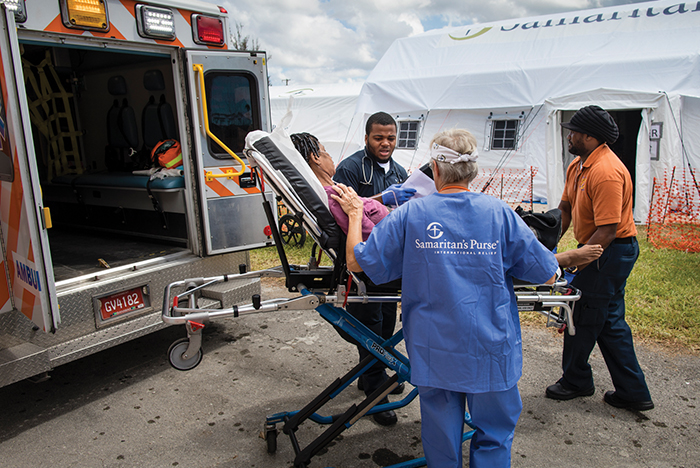 The Bahamas’ recovery from Hurricane Dorian has been hampered significantly by the devastation caused at hospitals and clinics in the hardest hit areas of the country. To help in recovery efforts, several U.S.-based health systems have sent teams to support both clinicians and facilities engineers by conducting early assessments of the impacted buildings.

When Category 5 Hurricane Dorian struck the Bahamas on Sept. 1, it became the worst natural disaster in the country’s history. As of Oct. 11, the Bahamas National Emergency Management Agency had put the official death toll at 61, yet more than 400 people were still listed as missing. With the death toll expected to continue rising as more missing victims are accounted for, and disease posing a greater threat in the disaster’s aftermath, it has become increasingly critical that damaged facilities gain full operation.

The Rand Memorial Hospital in Freeport, Grand Bahama, which serves as a hub of care for much of the island, suffered severe flooding in the days after the storm stalled over the island. At press time, the remnants of that damage were seen in the spread of mold. Earlier, the loss of electrical infrastructure and a contaminated water source had already left the building extensively damaged.

To address short-term needs, engineering firms and relief organizations have worked together to install water filtration systems at Rand Memorial to ensure clean water is available at the hospital. However, given the extent of damage to the hospital, Bahamian officials are also planning further out. AdventHealth in Orlando, Fla., has sent architectural and engineering team members to Rand Memorial to assess air quality and other damage in order to help Bahamian officials plan their next steps for the hospital.

Meanwhile, University of Miami Health System facility experts and clinicians are assessing the damage facing the Marsh Harbour Healthcare Centre on Great Abaco Island, just east of Grand Bahama. The 32,000-square-foot Marsh Harbour Healthcare Centre sustained some damage but remained largely intact in the heart of an otherwise devastated community. As in Grand Bahama, officials at press time were still assessing how best to equip the facility to respond to ever-shifting needs.

All of Abaco’s clinics are providing some level of service, according to the Pan American Health Organization (PAHO), but several clinics have had to get creative to meet patient needs. Two clinics — Man O War and Hope Town Clinic — are operating out of a nearby school and private residence, respectively. Early assessments indicate that all of the island’s health care facilities need some level of repair, if not complete replacement.

PAHO reported that four of Grand Bahama’s 10 public health clinics remained nonoperational, while two others were completely destroyed. As a result, the emergency field hospital set up by the humanitarian organization Samaritan’s Purse across the street from Rand Memorial on Sept. 10 remained active at press time. The organization treats more than 100 patients per day.

The self-sufficient 40-bed field hospital is complete with a full laboratory and digital X-ray, surgical theater and operating room, all powered by supplies airlifted from a warehouse in North Carolina. Since Sept. 10, Samaritan’s Purse medical personnel have worked to provide emergency gap services to ensure the services normally provided by the hospital continued with minimal interruption and allowed for continuity of care. Eventually, the field hospital will be transitioned to appropriate Bahamian government authorities.

For now, however, communicable diseases, mold and waterborne illness continue to cause concern for recovering families. As researchers noted in the study “Mortality in Puerto Rico after Hurricane Maria,” published last year in the New England Journal of Medicine, interruption of medical care was a primary cause of sustained high mortality rates for months after the hurricane.

From alternate spaces to enhanced precautions, the health care system has made fast adjustments to treat patients.