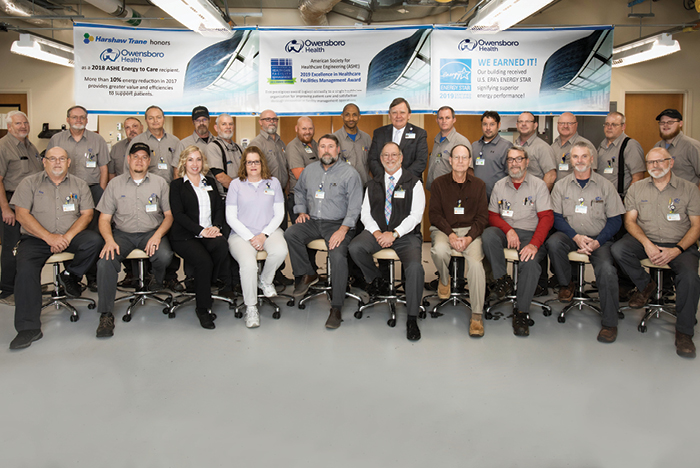 After Kentucky-based Owensboro Health Regional Hospital (OHRH) opened a brand-new replacement facility in 2013, the organization discovered that it was more expensive to heat, cool, illuminate and power its campus than originally estimated.

Thus began a five-year effort to enhance energy efficiency and reduce utility expenses while improving patient care, safety and comfort. Not only did the hospital achieve its goals, but, along the improvement journey, OHRH earned respect from its peers in the industry, attention from the press and several accolades.

These include ASHE’s 2018 Energy to Care award; a prestigious ENERGY STAR® rating; and the 2019 ASHE Excellence in Health Care Facility Management Award, which recognizes individuals or facility management departments that implement new or innovative programs or processes to optimize the physical environment and improve patient care.

“Once we began benchmarking our energy consumption, it became pretty obvious to us that we were wasting money on utility expenses,” Taylor says. “The early data gathered in 2014 showed that we were below the 25th percentile in energy efficiency compared with our peers. That was a shock to us because we thought that, by moving into a new hospital with cutting-edge equipment, we’d be operating extremely efficiently.”

While most of the equipment was up to snuff, “we found that we weren’t being good stewards of our resources, which includes our brainpower. Our facility leadership team knew we could do better,” he says.

Adding extra urgency was the fact that utility rates in the region for electric, gas and water were quickly rising.

“The time had come where we needed to dig deeper and explore some opportunities for improvement,” Taylor says.

OHRH assembled an internal team of facilities management specialists and enlisted the help of Harshaw Trane, a Louisville-headquartered energy engineering and consulting company. Collectively, they employed monitoring and analytics tools to identify areas where energy efficiency was lacking.

“When we began, the facility’s ENERGY STAR score was only 23,” says Eric DeLodder, energy engineer with Harshaw Trane. “We started to investigate each system from top to bottom — including the air handlers, chilled water pumps and variable air volume boxes — looking for key opportunities to save energy.”

“This required buy-in from the clinical side, as well. We were looking for improvements we could make without impacting the quality of care,” she says. “In particular, we were trying to identify areas where we could tighten start-and-stop-time schedules for mechanical and electrical systems and equipment.”

This ambitious initiative would have to proceed with minimal financial investment. That meant refining and fine-tuning existing infrastructure because replacing or upgrading most of this equipment would be cost-prohibitive.

“In health care, everybody is scrambling for capital dollars in a very restricted market. We wanted to be able to demonstrate that we could do the majority of these efforts and make an impact without spending very much money,” Taylor says. “So we went after the low-hanging fruit and the areas where we could generate the biggest savings the fastest.”

Taylor and crew also set key objectives that aligned with these intended efforts. The first was to return money to the hospital’s bottom line — savings that could be funneled right back into patient care. The second involved improving the environment of care for OHRH patients, staff and visitors. The third was to improve employee engagement, foster a spirit of collaboration among co-workers, encourage creative ideas and inspire staff to continue to seek out further energy efficiency improvements. The fourth goal came later after the team realized the impact their improvements were having: Apply for and earn ENERGY STAR certification. They set a five-year timeline, between 2014 and 2019, to reach these aims. 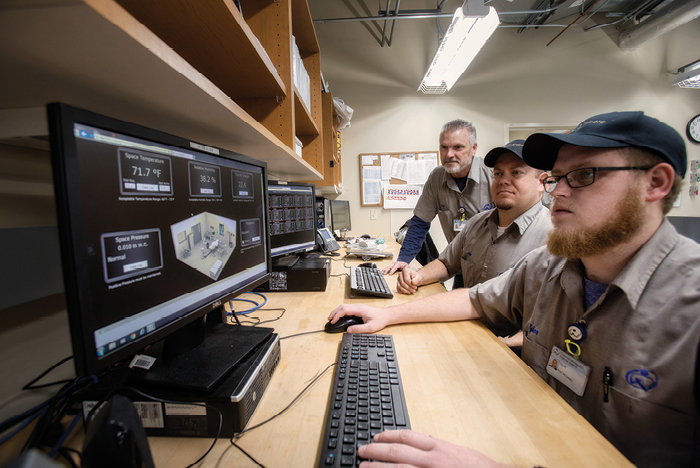 “We started out with a daunting task,” says Jim Morris, CHFM, OHRH’s manager of facilities maintenance and engineering. “But once our people started seeing some rewards from their efforts, it sparked a fire. They were coming into our offices and saying, ‘what if we did this or tried that?’ We learned that to get staff engaged, you’ve got to show them how they can make a difference.”

To identify energy-consuming culprits and gauge progress on improvements made, the team relied on a number of macro and micro benchmarks it continually measured.

“At the macro level, we used the Energy Usage Index (EUI) to determine if we were improving each month,” DeLodder says, adding that EUI is a calculation of the total amount of energy consumption for the building divided by the square footage of the facility. “This facility has a lot of new equipment and new controls, so there was data to be found everywhere. We were able to harness and leverage that data across all the systems and then sit down on a quarterly basis and map out where we were seeing inefficiencies. From there, we created action plans to address those inefficiencies and improve overall functionality, system by system.”

“One area we had an opportunity to improve was using free outdoor air to help condition our spaces. This required addressing the chilled water system and the air handling system to ensure efficiency while maintaining system reliability. This generated huge energy savings,” says John Jones, staff HVAC mechanic. “Now, we have several air handling units that can actually use outside air below 50 degrees to cool a space without having to pay for energy to chill that water.”

But not long after the initiative started, the group learned that having reliable new green equipment in place wasn’t enough.

“This newly built facility was designed to be very energy efficient. But once you occupy it, it’s really about how you operate it. That’s where we found plenty of room for improvement,” Fetsch says.

Case in point: The hospital’s 16 surgical suites were proving to be major energy hogs. “Providing 20 or more air exchanges and cooling or heating 750-square-foot operating rooms around the clock, whether they are in use or not, is really expensive. You typically don’t want to mess with your organization’s operating rooms. But we met with the OR staff, surgeons and senior leadership to demonstrate how we could make energy improvements safely there,” Taylor says.

The agreed-upon solution was to implement set-back programming and occupancy sensors in most of the ORs that could slow down the air handlers and reduce the air exchanges when the suite was not in use but restore these quickly — within three minutes — when the sensors detected motion or activity.

The motion sensor solution didn’t stop there. OHRH implemented occupancy sensors, time clocks, and other lighting and HVAC controls in many rooms across the building. “We even put motion detection lighting in our stairwells. Most organizations light these areas around the clock but we decided to make our stairwell lighting occupancy-based,” Taylor says.

And for even more efficient illumination, florescent bulbs and fixtures were swapped out hospitalwide with LED replacements.

“The process to achieve ENERGY STAR required the efforts of the entire team — all of the facilities staff, electricians, plumbers, HVAC technicians and maintenance mechanics,” says David Keller, engineering supervisor. “Their combined efforts, along with their different perspectives on ways to shave energy usage, gave us the pieces to the puzzle. The challenge was to assemble the pieces in the correct order to accomplish the goals quicker.”

Keller singled out the OHRH food and nutrition services department as a particularly valuable partner.

“As the word spread about our goals and our efforts to achieve ENERGY STAR, the food and nutrition services department jumped on board. Dietary leadership and staff were very vigilant to make sure ovens, stoves, deep fryers and vent hoods were shut off at the end of each day.”

OHRH’s efforts paid off. Five years after the campaign started, the hospital has decreased the cost of energy to the organization by over $2 million (24%), prevented the emission of more than 13,788 metric tons of carbon dioxide, saved 18 million kWh of energy, conserved nearly 100,000 MCF of natural gas, reduced its EUI from 289 to 218, and raised its ENERGY STAR score from 23 to 78.

“And we’re not stopping there. There are further energy enhancements coming, and our goal is to retain ENERGY STAR certification annually and continue returning money to the hospital,” Taylor says.

One previously unexplored avenue the OHRH team is eager to incorporate is combined heat and power, also known as cogeneration, which uses various fuels to generate electricity or power at the point of use. This allows heat that would normally be lost in the power generation process to be recovered to provide needed heating and/or cooling.

“There’s nothing a committed organization can’t do when it applies brainpower and willpower. If you can harness those qualities in your team, there are always opportunities for energy savings,” Taylor says. “A lot of hospitals out there have zero money to invest in infrastructure. But if you assemble a quality team and are committed to benchmarking yourself against the marketplace by using ENERGY STAR Portfolio Manager and other metrics — which often require no cost and very little effort to get that data — you can begin to identify energy-saving opportunities.”

“What they’ve done is remarkable and sustainable,” Rankhorn says. “And they continue to measure their efficiencies and make improvements, which will only increase the savings they earn. Plus, the fact that they included facility managers and caregivers to make this happen shows how team minded they are and what can be accomplished when your entire facility works together to achieve a goal.”

Terry Scott, CHFM, CHC, notes that OHRH faced strong competition in the field of applicants, “but they ran away with the award. It was a unanimous decision by our committee. Consider that there are only about 70 ENERGY STAR-rated hospitals in the entire country; it’s not an easy feat to achieve.”

Taylor, who says he’s personally humbled by the ASHE honor bestowed on the hospital, credits Owensboro Health President and CEO Greg Strahan and Executive Vice President and CFO John Hackbarth for supporting and encouraging his team during their efforts.

“Greg and John gave us the freedom to go for it,” Taylor says. “We also need to thank the many HVAC mechanics, electricians, plumbers, clinical staff and housekeeping staff involved, some of whom started with us back in 2014 but have since retired or gone on to other jobs.

“We couldn’t have accomplished this without everyone’s collective assistance,” Taylor concludes.

Erik J. Martin is a freelance writer based in Oak Lawn, Ill.

Compliance expert Susan McLaughlin discusses her career journey, paving a path for others and major compliance challenges in the field.