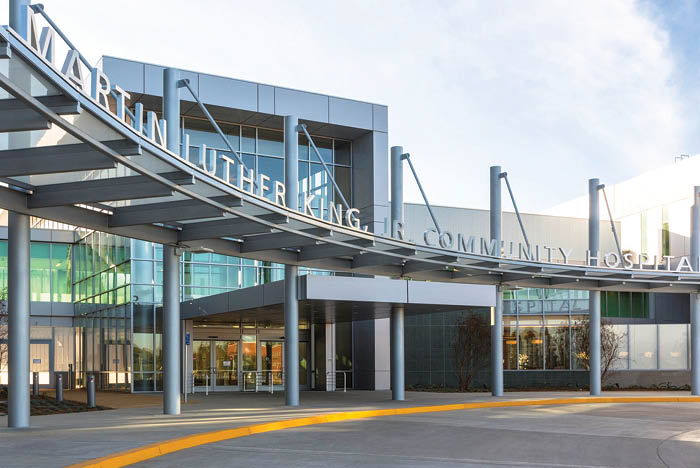 Security is always paramount for hospitals and health care centers, but hospitals in larger cities often face a particular set of challenges when it comes to keeping patients, staff and visitors safe.

Although Martin Luther King, Jr. Community Hospital (MLKCH) in Los Angeles has established its reputation as a safe and secure facility since its founding in 2013, administrators at the health care center recognized the importance of taking steps to maintain that safe environment. However, the third-party team utilized by MLKCH proved ineffective at monitoring and maintaining its security system. As a result, administrators began to look for a better solution and turned to Axis Communications for a major upgrade to its security services.

“We’ve always had Axis products in the hospital,” says Mark Reed, director of support services. “We have a great relationship with Axis. Our entire security system deploys Axis network cameras in the various halls throughout the hospital, and we’re monitoring numerous upgrades over the past two years.”

In addition to the recent upgrades to its IP cameras and video management capabilities, MLKCH has worked with Axis to identify other emerging technologies that can help better protect the hospital premises.

According to the Occupational Safety and Health Administration (OSHA), the risk of serious workplace violence is nearly four times greater for health care workers than those in other fields, and the ability to identify potentially aggressive or hazardous behavior can help hospitals better protect not just patients, but employees as well.

By integrating Sound Intelligence analytics with its Axis cameras in heavily trafficked, high-stress environments, MLKCH will enable its security system to detect threats quicker than with video-based IP cameras.

The ability to detect aggressive behavior has the potential to allow hospital staff to address dangerous situations before they escalate.

In addition, the health care facility is looking into implementing facial recognition technology — particularly in access-controlled areas — to allow the system to recognize authorized personnel and alert security to potential intruders.

Keeping the hospital premises protected at all times is of paramount concern, and MLKCH is also exploring deploying radar detection technology in the back dock and other areas where there should be little activity outside of regular hours. Radar detection is capable of detecting people or objects and sending their exact coordinates to IP cameras in the area, which can then automatically zoom in on the potential intruder with no manual action required by the security team. Real-time alerts can then be generated for the security team, a feature that has particularly interested MLKCH.

The improvements have allowed MLKCH to better secure sensitive areas, such as maternity wards, by restricting access to authorized personnel only. Deployment of Axis IP cameras in high-traffic common areas has also allowed the hospital to reduce liability by getting to the bottom of slip/trip/fall cases. This particular use case has the potential to save the hospital tens of thousands of dollars in fraudulent liability cases, enabling them to reallocate those resources to patient care and protection.

One additional technology that MLKCH is considering deploying is patient monitoring technology.

While the hospital has had great success keeping common areas safely monitored with network cameras, MLKCH has resisted putting cameras in patient rooms. That may change in the future as technology like thermal cameras can offer high-risk patients a greater degree of protection without sacrificing patient privacy and identity.