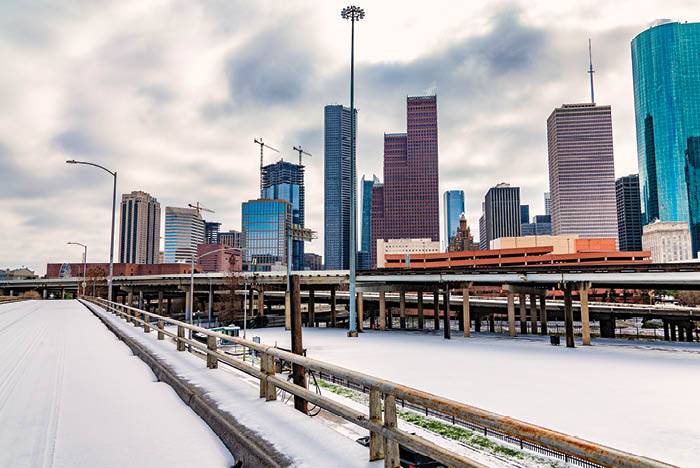 Houston experienced heavy snowfall and freezing temperatures uncommon to the area in February.

When a polar vortex was forecasted to hit Texas and surrounding states in mid-February, health care facilities leaders began preparing for record-setting freezing temperatures and snowfall that would last for more than a week. In some areas of this typically warm region of the country, temperatures hit a low of -19 degrees and saw 10 inches of snow.

“The weathermen on the news began talking about this five to 10 days ahead of time, that a polar vortex was coming. That part was known, so as we were getting closer to the event, the hospital’s incident command activated three to four days ahead of time, and our ride-out team was called in,” says Pouyan Layegh, P.E., MBA, LEED AP, director of facilities management at The University of Texas MD Anderson Cancer Center, Houston.

Layegh says that standard procedure at his facility prior to an extreme weather event includes working with the local power utilities to assist in decreasing demand on the electrical grid. The facilities team at MD Anderson began prepping by warming up generators — turning them on and off a few days ahead of the freezing temperatures and topping off fuel tanks — and ensuring remote monitoring of its backup power systems were working properly to keep the hospital’s life safety systems up and running.

“During this time, I was very concerned about our remote data center, which is part of our life safety systems,” Layegh says. “Many people, when they think of life safety, think of your emergency lights, heaters or exit lights, but it’s very clear right now that your data and communication system is part of your life safety system. You can’t operate safely without your phone and data systems up and running.”

The preparation paid off, as none of the backup generators failed during the storm.

As temperatures increased, however, frozen water sitting in sprinklers began to thaw, causing pipe bursts and code reds in several areas, including generator rooms. Alerts were sent to the local fire department, and MD Anderson’s ride-out team worked with first responders to ensure conditions were safe.

“We had to make sure everything was secure and safe,” Layegh says. “In the future, we plan to drain the sprinkler systems to prevent bursting.”

“We did have fire sprinklers freeze and burst,” she says. “I talked about it with my team a couple of days ahead of time to make sure everyone knew where the valves were located and went over emergency protocols, but you still feel the pressure when it happens and you and your team are trying to get the water shut off and sweep out water in freezing temperatures.”

Michael Hatton, vice president of facilities at Memorial Hermann Health System, Houston, says his facility also had to keep a close watch on sprinkler systems to monitor exposed pipes; however, he says the facility also faced a different issue in regards to water.

Although Memorial Hermann’s backup power systems kept facilities running, others in the community — including some municipalities’ water utility plants — did lose power. This set off a chain reaction of water stoppages throughout the city and boil water notices.

“Luckily, we have our own private water well at one campus, so we were able to use that to feed some of our other locations,” Hatton says. “We found a partner to truck water to those facilities to keep things like boilers and chillers going. And we worked with our environmental health experts to get buildings sanitized once the boil water notice was lifted.”

As facilities impacted by the weather look at lessons learned and how to apply them to future operations, Northcutt says it’s important that facilities managers don’t overcorrect.

“You have to find a middle ground,” she says. “You don’t want to waste too much time and resources on things that really may not happen for another 100 years. So, just because we had a snowstorm in this area doesn’t mean it makes sense to purchase 50 snowplows, but it may make sense to do better training on how to handle the next one.”

PDC Summit wraps up with lessons learned after natural disasters

Texas Medical Center leaders share how a 2001 storm helped them to prepare for Hurricane Harvey.