Logout
Home » No substitute for a good filter
Infrastructure

No substitute for a good filter 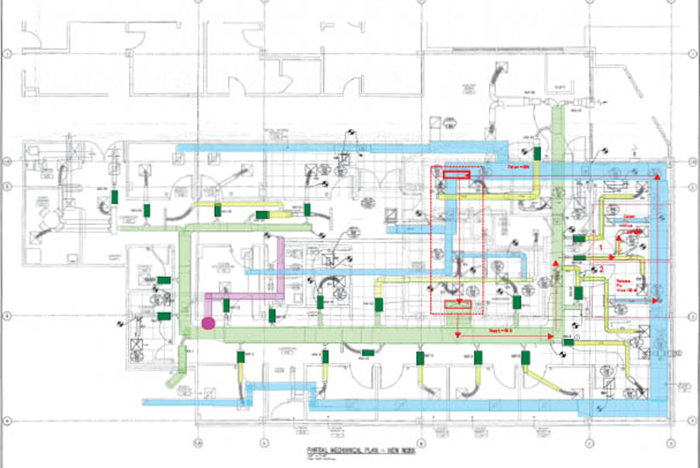 A marked-up blueprint of the area that was tested during the Wake Forest Baptist Hospital research project.

Image courtesy of the authors

While health care-associated infections (HAIs) remain a high priority for health care organizations, facilities engineers are doing their part in solving these problems. There is not an American Society for Health Care Engineering (ASHE) member who would not do whatever they could to prevent patients from being harmed by illnesses that they did not arrive with, but the question is, “How?”

Health care facilities engineers have many construction and engineering responsibilities that can directly impact hospital HAI practices and rates. One example is that sinks placed in the back of a room are less likely to be used and thus impact hand-hygiene practices.

Vendors also need this input to help ensure that their products are effective in a hospital setting, not just in a third-party laboratory.

Located in Winston-Salem, N.C., Wake Forest Baptist Hospital is an 885-bed academic teaching hospital with a Level I trauma center, where physicians and staff care for the most critically ill patients in the area. When COVID-19 arrived in the spring of 2020, new challenges arrived with it.

To combat spread of the virus, placing portable high-efficiency particulate air (HEPA) fans in patient rooms and exhausting the air out the window was effective, but this method was limited because HEPA fans were in short supply. With only about 50 accessible fans, installing HEPA fans was not always possible due to the size of the room. Also, the fans are loud and can create problems for staff trying to hear critical alarms and for patients trying to sleep.

The facilities engineering department was tasked with making the large areas of the facility safe for patients and staff. Both the engineering and the infection prevention teams agreed that setting air handlers to 100% outside air and rebalancing spaces to create negative pressure was the best path forward. Fortunately, the design engineers had the foresight to specify oversized cooling coils in the newest air handlers so that this economizer mode could be run throughout the summer.

When it became apparent that COVID-19 was likely to continue to pose challenges through the winter months, however, the engineering staff and hospital leadership knew a new solution had to be found to prevent the coils from freezing. It was not possible to add HEPA filters to the air handlers, so a scientific study was commissioned with the clinical research team at the academic medical center to help find a solution.

The purpose of the study was to determine if there were alternate configurations within an air handler that would enable the air in COVID-19 areas to be recirculated without the high pressure drop of a HEPA filter.

The research team decided not to try to solve this problem by using engineering formulas or to perform their research in a laboratory under controlled conditions. Instead, the team wanted to perform tests in an actual hospital space, using existing air-handling equipment, to best understand the behavior of the virus in a real-life environment. The team was fortunate to be able to use the HVAC system in an unoccupied emergency department (ED) of a neighboring hospital.

The infectious disease physician who helped to conduct the test explained that the COVID-19 virus would behave similarly to the influenza virus. Therefore, after securing the area so that no one could walk through the empty space, the team released and collected defined concentrations of live-attenuated influenza vaccine (LAIV) viruses in triplicate in adjacent exam rooms and assessed the particle count.

The transmission of LAIV in each room was measured by quantitative polymerase chain reaction (PCR) and cell culture under various configurations.

The empty ED was served by a dedicated 15,000-cubic-feet-per-minute rooftop air handler, as shown in Figure 1 below. To create a scenario with the “worst possible conditions,” the outside air and exhaust dampers were closed to maximize the amount of virus that would be returned to the space. The exam rooms that were used in the experiment were chosen to minimize the length of the supply and return air ducts. 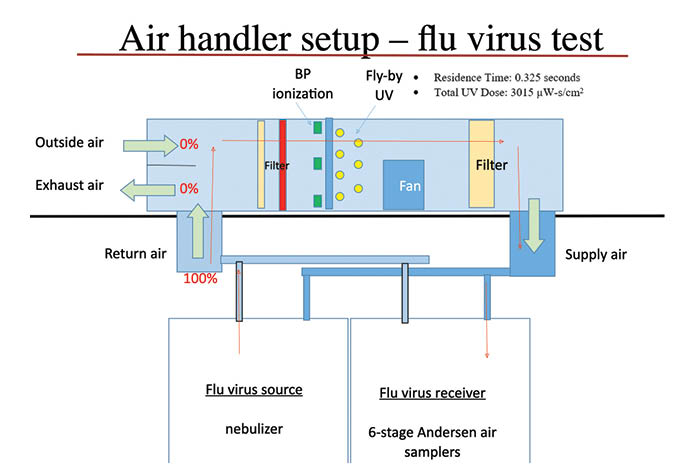 The following five tests, or arms, were performed by changing the configuration of the air handler:

Arm 1: No filters, ultraviolet C (UVC) light off, bipolar ionization off. The purpose of this test was to understand how much virus could be spread from one room to another by the air handler without any obstructions, other than the coils and fans.

Arm 2: No filters, UVC light on, bipolar ionization off. By running the UV test without filters, the team wanted to give the UVC light the maximum opportunity to kill the virus. The system installed used 16 UVC bulbs. The manufacturer stated that it would produce a UVC dose of 3015 µW-s/cm2, with a residence time of 0.325 seconds; the stated inactivation rate for Influenza A was 98.1%. This configuration is much more intense than the hospital has traditionally used to keep the coils and drain pans clean.

Arm 3: Minimum Efficiency Reporting Value (MERV) 8 pre-filter + MERV 14 final filter, UVC light off, bipolar ionization off. This configuration is the typical hospital setup at Wake Forest Baptist and would establish what would be “normal” in the hospital’s environment.

Arm 4: MERV 8 pre-filter + MERV 16 final filter, UVC light off, bipolar ionization off. The MERV 16 was the highest MERV rated filter that could be used in this air handler. This test would see what maximum filtration could achieve.

Arm 5: MERV 8 pre-filter + MERV 16 final filter, UVC light off, bipolar ionization on. Bipolar ionization can be used in many ways. It can be used as a coil cleaner, similar to the way hospitals have traditionally used UVC lights. If it is installed downstream of the final filter, the ions travel into the occupied space where the manufacturer claims it will kill many different viruses and bacteria.

It was not within the scope of this test to determine how effective or safe it is to place these ions in occupied spaces.

[To further test the claim that bipolar ionization could improve the filter efficiency by binding small particles into larger ones that the filter could then capture, the team wanted to see if the combination of MERV 16 + ionization could reach the performance levels of a HEPA filter. These tests were conducted with the outside air dampers and exhaust dampers in 100% open positions. Particle counts were taken outside initially, and then again in the exam room, to determine the efficiency of the arrangement. In this real-world test, both the MERV 14 and MERV 16 filters performed higher than their rating. The bipolar ionization system showed an improvement, but it did not reach HEPA’s (MERV 17) 99.97% filtration level.]

A nebulizer was used to spray a set amount of influenza mist virus into the air. The nebulizer was taped to an exam light and placed directly under the return air grill of an exam room. The research team understood that locating the nebulizer directly under the air return grill did not represent a patient laying on the exam table, but it did maximize the amount of virus that could be introduced into the air handler. 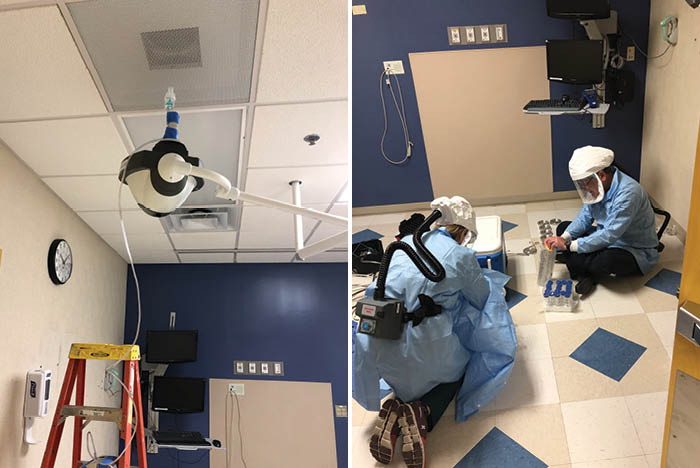 From left: A nebulizer is positioned directly under the return grill in the exam room, while team members place the petri dishes into an Andersen cascade impactor in preparation for a test.

Images courtesy of the authors

In the next exam room, three six-stage, Andersen cascade impactors were used to capture the virus during each test. An Andersen cascade impactor pulls a set volume of air into its six chambers, where particles are sifted by size and caught on petri dishes. This device was designed to represent the human respiratory system and the degree of lung penetration by the particles. For instance, Stage 1 particles would by stopped by the nasal cavity, whereas Stage 6 particles would travel all the way into the alveoli.

The petri dishes from the test were sent to a laboratory for incubation and quantification of influenza viruses. Three impactors were placed in different locations in the exam room, and the results were averaged together.

The results from the lab are shown in the logarithmic charts in Figure 2 and Figure 3 below, with the “S” numbers signifying each particle stage. The shaded region in the plot identifies values at or below the limit of quantitation. 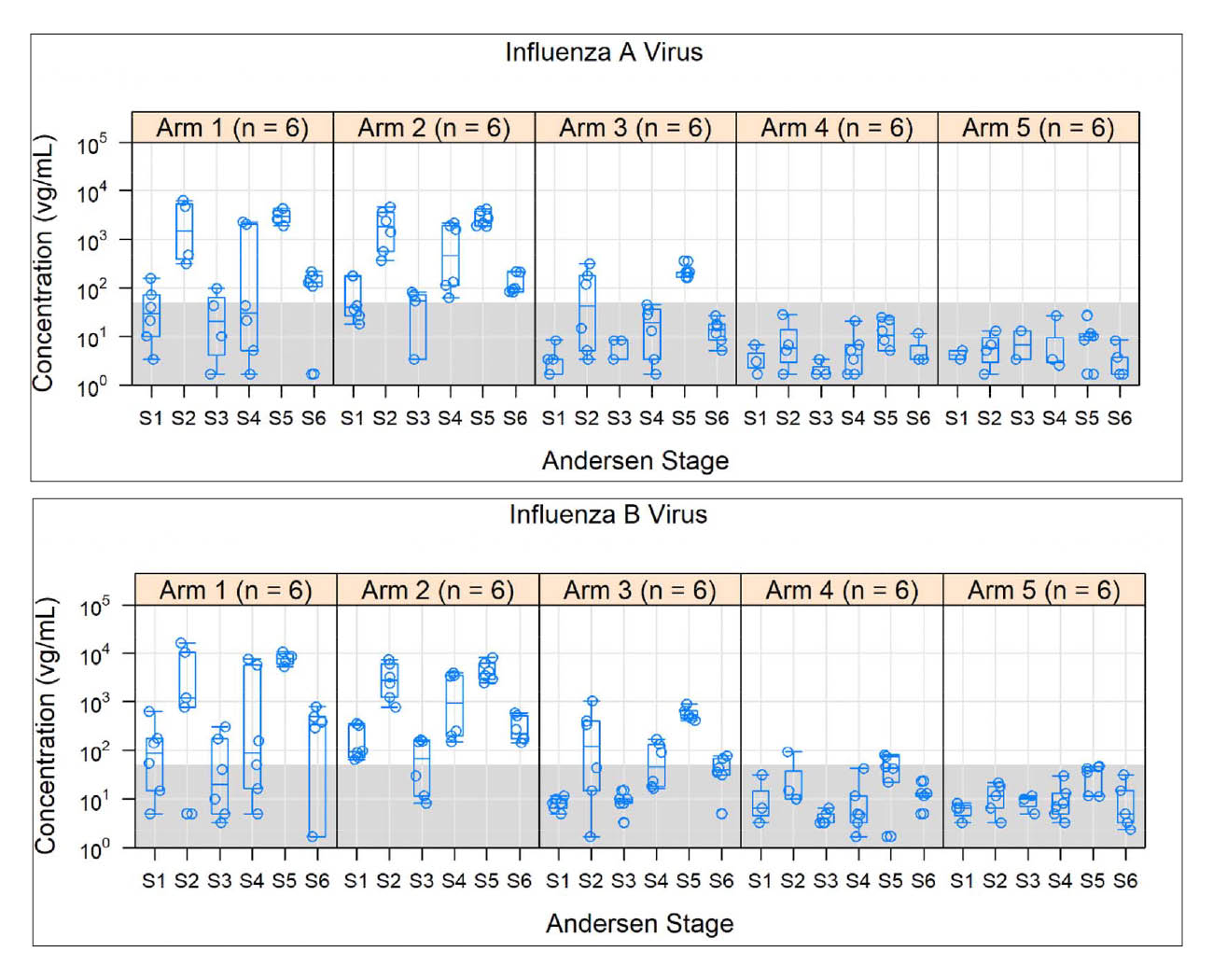 Figures 2 and 3: Concentration of Influenza A Virus and Influenza B Virus collected by six Andersen stages during each test, or arm. 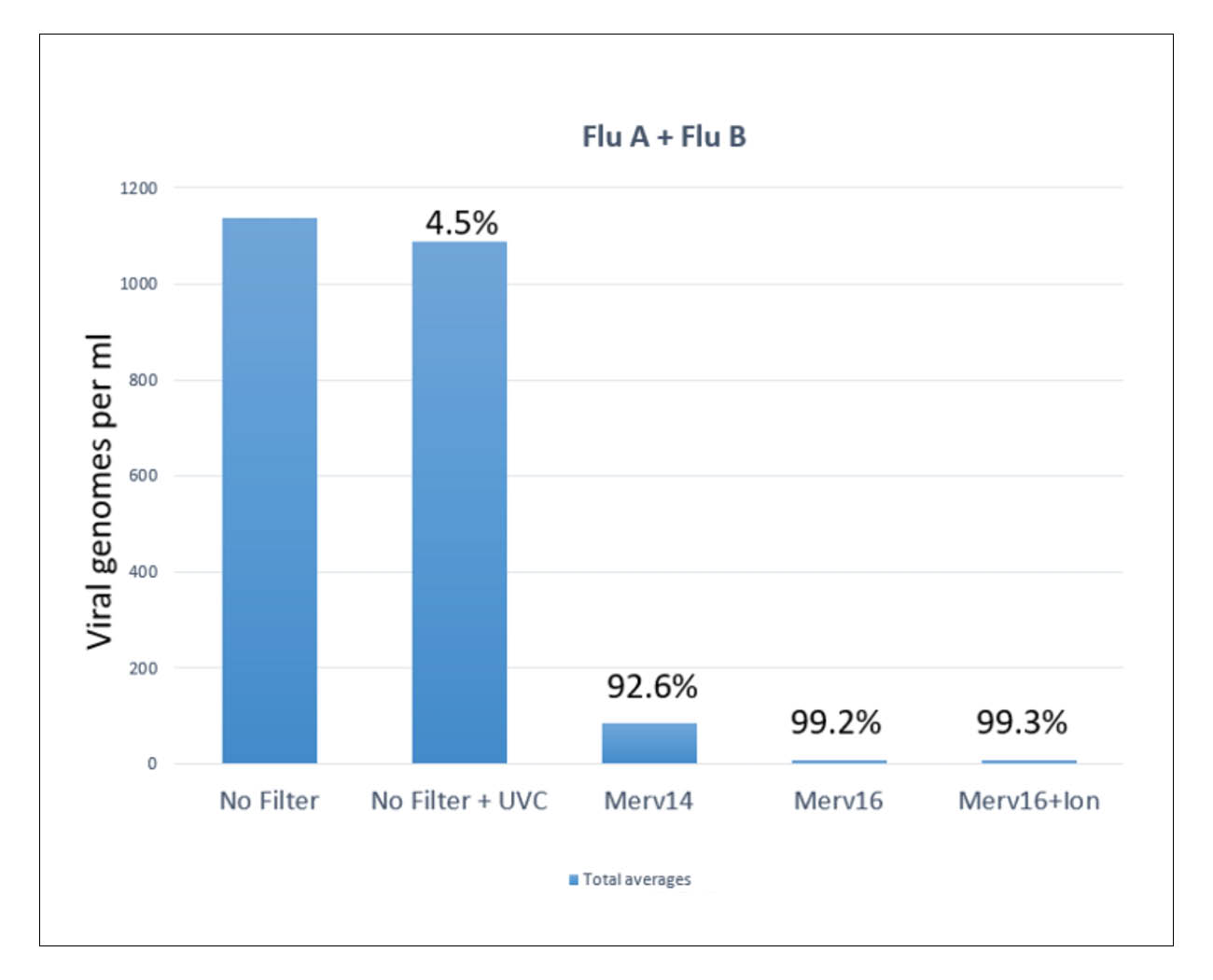 Figure 4: Concentration of Influenza A and B averaged from six Andersen stages of each test, or arm.

The simplified graph in Figure 4 above shows the data from each of the six stages, averaged together. Each test is also labeled with the percent of virus reduction from the “no filter” control test.

The purpose of this article is to share the findings of the Wake Forest Baptist research team; however, the results of this test have not yet been peer reviewed. The following conclusions are based on results of this one experiment exclusively, and further study is needed to validate this research.

The following conclusions can be drawn from the test data: 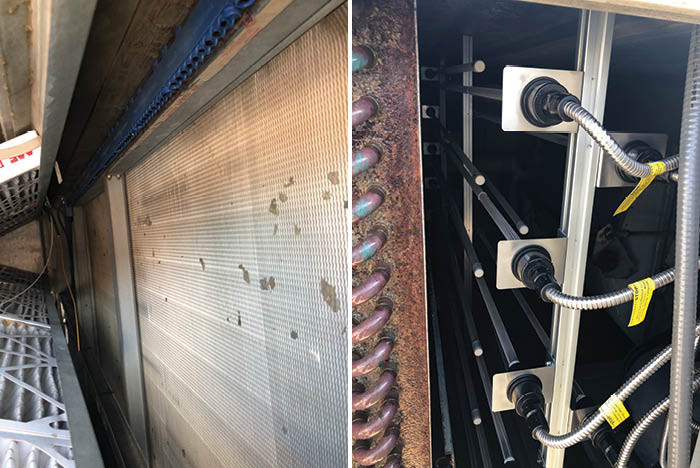 From left: The blue bars of the bipolar ionization system are mounted above and in front of the cooling coil, while ultraviolet C lights are mounted just downstream of the coiling coil.

Images courtesy of the authors

Placing MERV 16 filters in the air handlers allowed the outside air dampers to return to 20% open and for the organization to stop paying two times the energy bills while on 100% outside air.

Despite the slight energy penalty of upgrading from a MERV 14 to a MERV 16 filter, the “low pressure drop” MERV 16 filters offer a cost-effective and feasible alternative to using HEPA filters to prevent the spread of viral pathogens through HVAC systems. HEPA filters will continue to be used as required in other spaces but, based on the information gathered in this test, Wake Forest Baptist Health has adopted the MERV 16 filter as the new standard in patient care areas.

While standards and accreditation organizations require health care facilities engineers to spend a significant amount of time and resources on relatively rare fire safety issues, their limited emphasis on the engineering side of infection prevention has left a knowledge gap.

By working together and sharing knowledge and ideas across disciplines, facilities engineers, infection prevention professionals and vendors can close this knowledge gap and the welfare of patients can be improved.

The role of mechanical systems in minimizing pandemic transmission.

A three-pronged strategy for energy purchasing

Patients are a priority for hard-flooring makers