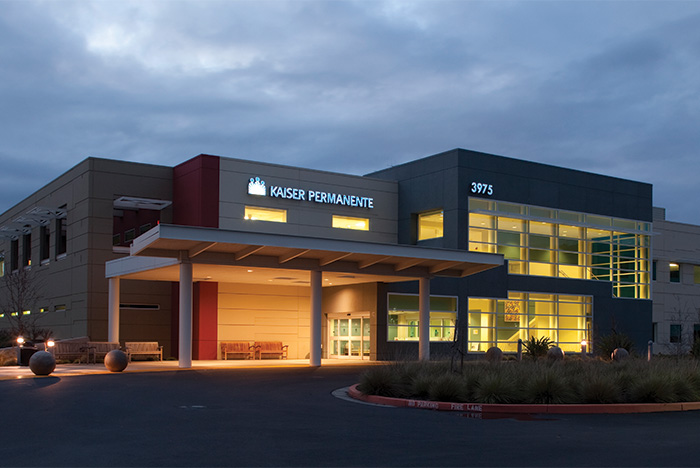 Climate change is the biggest global health threat of the 21st century … The impacts will be felt … all around the world – and not just in some distant future but in our lifetimes and those of our children.”

Written 13 years ago in a joint report authored by University College London and The Lancet, that prediction is prophetic given a recent United Nations report confirming the disruption climate change is already causing on every continent.

According to Health Care Without Harm, the highest contributions to the global health care climate footprint come from the United States (546 million metric tons of carbon dioxide equivalent), equal to that of 141 coal-fired power plants per year.

The Department of Health and Human Services (HHS) is urging hospitals and health systems to commit to reducing their greenhouse gas (GHG) emissions by 50% by 2030 and to net zero by 2050, the same level of reductions the federal government has already promised for its own buildings, including Department of Veterans Affairs hospitals.

Hospitals that set ambitious goals now, and back them up with action, will be better prepared for future regulations that might aim to reduce health care sector emissions. HHS Secretary Xavier Becerra acknowledged that his Office of Climate Change and Health Equity, which the Biden administration created last fall, is actively considering policy changes towards this end.

The Environmental Protection Agency’s (EPA’s) ENERGY STAR® program for commercial buildings, launched in 1996, is the oldest and one of the most successful programs to provide hospitals with the technical know-how to improve energy performance.

Over the past 25 years, hundreds of health care organizations have partnered with ENERGY STAR to cut costs by reducing energy use, earn recognition by certifying their buildings, and fulfill sustainability goals. Many are leading the field in decarbonization efforts.

The work of select health care partners has already demonstrated success in one or more of the three steps needed to decarbonize existing buildings. These steps include the following:

• Energy efficiency is critical to achieving reductions in carbon emissions — as much as 51% of the total reductions through 2030, according to some reports.

• The purchase of power from renewable sources of generation, such as wind and solar, also will drive carbon reductions, especially in areas reliant on electricity produced from fossil fuels.

• Beneficial electrification — converting fossil heating, water heating and cooking to electric service — will provide the bulk of decarbonization in later years when the grid is powered with clean renewable energy. A few hospitals have achieved zero emissions — including the newly built Weed Army Community Hospital in Fort Irwin, Calif. — with many more making significant energy and carbon reductions.

The examples cited below are proof that hospitals can decarbonize cost-effectively without sacrificing comfort or patient safety. As a result, they offer a potential roadmap toward achieving HHS’s goal of cutting GHG emissions in half by 2030.

Memorial Hermann Health System is the largest nonprofit health care system in Southeast Texas, operating 14 general medical and surgical (GMS) hospitals among a portfolio of clinical facilities. It has achieved ENERGY STAR certification in 11 hospitals — a 79% certification rate, which is the highest among hospitals in the country.

ENERGY STAR-certified hospitals use 35% less energy and emit 35% fewer GHG emissions than typical hospitals, on average. Hospitals become eligible for certification when they reach a minimum score of 75 on the 1-to-100 ENERGY STAR scale, which compares a hospital’s energy performance against that of similar hospitals across the U.S.

Memorial Hermann’s journey to top performance came from modest beginnings. In 2008, when they first benchmarked in ENERGY STAR Portfolio Manager®, they were surprised to learn that their average hospital ENERGY STAR score was 41, significantly below the industry average. Even some of their new hospitals scored well below 41, a clear signal that things were not working as expected. Instead of getting defensive and questioning the validity of the score, they got to work.

Early on, the energy team at Memorial Hermann did not have much of a track record in saving energy. They felt the need to prove themselves before asking for large capital improvement projects, so they made operational improvements to existing equipment. It paid off in ways no one expected.

In one older hospital, health care engineers focused on repairing steam trap leaks, reducing steam system pressure to match operations and recalibrating older pneumatic systems. They also took a redundant boiler off standby and developed an energy-saving competition amongst their team. Over five years, they raised their ENERGY STAR score from a 29 to a 76 and saved $1.1 million in energy costs. Just going through the process helped develop the mindset that there were always opportunities to find, if they only looked.

At Memorial Hermann, there was a belief that new buildings with modern equipment didn’t need operations and maintenance like older facilities did. New hospitals were perceived to be almost perfect examples of energy efficiency. That perception vanished when a new hospital was benchmarked. It had a baseline score of 38, three years after it opened for operations. Before it was scored, facilities engineers thought they were doing okay from an efficiency perspective but, when they checked assumptions, they started finding many opportunities to improve. Over four years, the hospital increased its ENERGY STAR score to an 85, saving over $500,000 in the process.

A close twin of this hospital baselined at 15 after it became operational. The hospital went through a massive recommissioning effort, rebalanced and recalibrated its systems, and methodically approached a maintenance program that eventually reduced energy consumption by half. The four-year effort saved over $1 million and convinced Memorial Hermann that even very low-scoring hospitals could be brought up to a score of 90, cost-effectively.

This experience led to the adoption of an energy policy for new construction for the hospital system, which specified that new hospitals and offices must achieve ENERGY STAR certification within 13 months of occupancy. The goal requires tracking energy from design through performance using Portfolio Manager, and that they:

Since this policy went into effect, two new Memorial Hermann hospitals have gone through the design process and earned ENERGY STAR certification shortly after beginning operations. Memorial Hermann’s focus on new and existing buildings has paid huge dividends. Since 2009, electric consumption has fallen by 26.4% and natural gas by 69.4% system-wide, saving an estimated $160 million and reducing GHG emissions by 17.5% per square foot.

After implementing projects to improve the efficiency of hospitals, procuring clean energy is a critical next step to reducing emissions. Hospitals in the Boston metro area are a case in point, as they committed to the city’s GHG emission reduction goals of 50% by 2030 and 100% by 2050.

A commission formed to evaluate progress found that absolute GHG emissions in Boston hospitals had declined by 18% from 2011 to 2019. The largest contributor of this reduction was the procurement of renewable energy sources. The commission predicted that hospitals would be able to reduce a total of 38% of their emissions by 2030 only if they procured 100% of their electricity from renewable sources. The remaining 12% would come from reducing natural gas or transportation emissions.

Electrification is another key step to decarbonize buildings. Displacing natural gas with electric systems will remove fossil fuels from buildings and enable them to become even more green as the electric grid transforms with clean energy. All-electric hospitals exist in all parts of the country and at least 10 have earned ENERGY STAR certification in Ohio, Colorado, Alabama, California and Michigan.

While making a hospital all-electric is straightforward during new construction, making the switch in existing hospitals will likely require a long planning horizon. The local grid must have the capacity to absorb the extra demand, otherwise the utility company may require costly payments for improvements that make the project infeasible.

Even with available grid capacity, a transition to electric systems may make sense at the building level only upon replacement of the current fossil-fuel systems. Knowing the approximate end-of-life replacement date will help put the planning stages in place now.

For example, Kaiser Permanente is one of the first health care systems to begin planning for electrification. Its 87,300-square-foot, all-electric medical office building in Santa Rosa, Calif., is the first demonstrated net-zero carbon health care building in the U.S., according to ILFI, the International Living Future Institute. Completed in 2018, the building has 95 exam rooms; eight procedure rooms; imaging, laboratory and pharmacy units; an on-site cafe; 497 parking spaces; and over a dozen electric-vehicle chargers.

The all-electric design eliminated the need to connect to the natural gas line, saving $1 million in first costs. The HVAC system uses a heat pump for each of the five thermodynamic zones of the building. Independent office controls use thermal diffusers that open and close ventilation dampers to maintain a desired temperature. A heat pump also is employed for domestic hot water, one of the first of its kind.

The design team implemented a variety of sustainability features, including a building envelope made of insulated interlocking cladding panels, glass that darkens in response to solar radiation, and all LED lighting. The facility’s on-site 617-kW photovoltaic array produced 992,000 kWh in its first year of production.

Rising to the challenge

Transforming health care to net-zero carbon may seem like an impossible task, but many are rising to the challenge.

The collective response of health care facilities professionals will demonstrate how nimble, talented and innovative the field can be.

Clark Reed is a national program manager for ENERGY STAR Commercial Buildings at the Environmental Protection Agency in Washington, D.C. He can be reached at reed.clark@epa.gov.