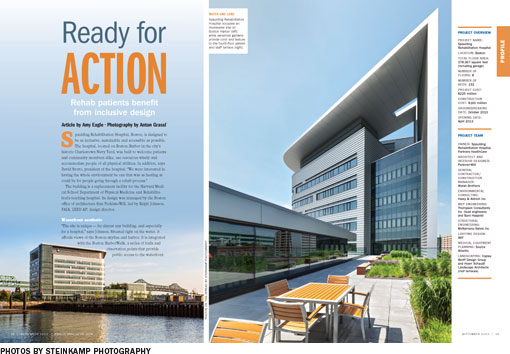 Spaulding Rehabilitation Hospital, Boston, is designed to be as inclusive, sustainable and accessible as possible. The hospital, located on Boston Harbor in the city's historic Charlestown Navy Yard, was built to welcome patients and community members alike, use resources wisely and accommodate people of all physical abilities. In addition, says David Storto, president of the hospital, "We were interested in having the whole environment be one that was as healing as could be for people going through a rehab process."

The building is a replacement facility for the Harvard Medical School Department of Physical Medicine and Rehabilitation's teaching hospital. Its design was managed by the Boston office of architecture firm Perkins+Will, led by Ralph Johnson, FAIA, LEED AP, design director.

"The site is unique — for almost any building, and especially for a hospital," says Johnson. Situated right on the water, it affords views of the Boston skyline and harbor. It is integrated with the Boston HarborWalk, a series of trails and observation points that provide public access to the waterfront.

The site informs much of the hospital's design. "Obviously, Boston is a brick town. But on this particular site the things that you notice the most are the infrastructure, the bridges. The boats going by are sometimes even larger than the buildings around them," Johnson says. The facility's gray exterior is evocative of ship-building material. This design not only responds to its surroundings, it allowed for the use of more exterior glass, opening up the building in a way that would not have been possible with traditional brick, he adds.

Development on the waterfront is regulated by the Boston Redevelopment Authority, whose guidelines require buildings to step back somewhat from the water's edge to protect open views. In response to this requirement, the building's mass is divided into two parts. Nearest the water is a three-story section containing the therapy pool and large gymnasium; behind this is an adjacent eight-story bed tower. 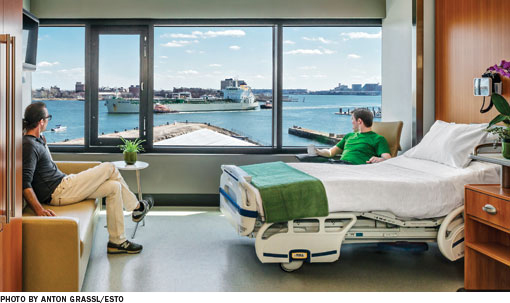 Curves and cubical elements give the building a number of different appearances when viewed from different angles. "Instead of being one big box, it's a series of interlocking sculptural elements that are expressing movement" with respect to the therapeutic process, Johnson says.

The structure doesn't just represent this process, it plays an active role. "We like to think of the building and the site as a therapeutic tool," says Jessica Stebbins, IIDA, LEED AP, associate principal, Perkins+Will. Outdoor therapy spaces including a waterfront garden with ramps and a large terrace off the third-floor gym tie the facility to its environment and the hospital's rehabilitative mission. Even the exterior paving system is designed to provide a therapeutic benefit: The light gray surface is intersected at regular intervals by dark granite bands, to enable patients to measure how far they have progressed around the site and to encourage them to go farther. "Architecture as part of the healing process is really the big idea," says Johnson.

Oak timbers and granite reclaimed during site remediation [see sidebar, Page 22] were used to rebuild the seawall and create a patio and outdoor furniture for the facility. "I thought that was pretty neat," says Storto, of the rehab hospital's ability to restore and make good use of this material during the project. 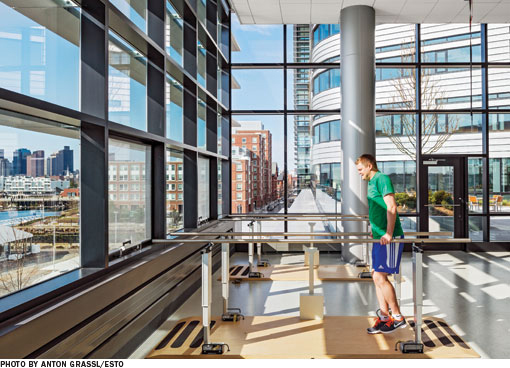 The hospital entrance is fully accessible, a large improvement over the previous facility, where the main entrance was located up a flight of stairs. This arrangement required people in wheelchairs to use a side entrance where a ramp was located. Now, everyone experiences the hospital in the same way. "That was one of the largest design goals we had for this building," says Stebbins.

To learn how the building could accommodate all users, the design team spent a day maneuvering the existing facility in wheelchairs. This exercise, says Stebbins, gave them a valuable perspective on how to design a building that is accessible from a physical standpoint and promotes inclusivity from a social standpoint.

Due to its location, Spaulding Rehabilitation Hospital is required to maintain public access to the waterfront and much of the building's first floor [see sidebar]. Inclusive design elements ranging from the common entrance to six-foot-wide corridors in administrative areas, which exceed the width required for business occupancy but are easier to navigate in a wheelchair, make it easy for staff members, patients, their families and the public to circulate and interact naturally.

Outdoor views and natural light are emphasized throughout the building. Each patient floor features a multipurpose room with floor-to-ceiling glass that maximizes views from the building. Smaller lounges, designed somewhat like porches, also overlook the water. In the patient rooms, dark color applied to exterior walls helps to frame the view outside.

The large rehabilitation gym is a grand, pavilion-like space surrounded by windows and further brightened by skylights. According to Storto, the open design gives therapists the opportunity to collaborate and patients a chance to see others engaging in therapy at the same time, while the acoustics allow people to have a conversation without raising their voices. 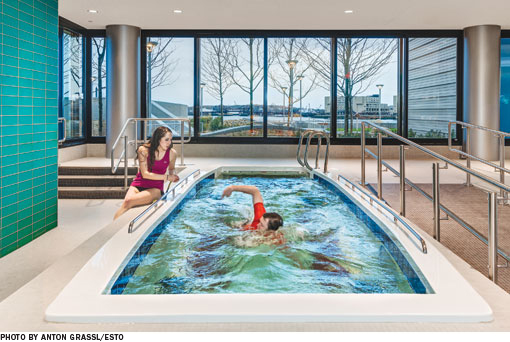 The hospital opened less than two weeks after the Boston Marathon bombings. At the time, says Storto, "it was comforting to know that these people who just happened to be in the wrong place at the wrong time, victims of a terrorist attack, were going to get the absolute best possible experience," both from Boston's acute care hospitals and for rehabilitation. All patients "should be able to benefit from a state-of-the-art rehab hospital," he says.

"[The hospital] has a low energy-use intensity, or EUI," says Robin Guenther, principal, Perkins+Will. "It is expected to operate at about 163 kBtu per square foot per year." By comparison, figures released last August by the U.S. Energy Information Administration show that in 2007, the major fuel intensity of hospitals roughly the size of Spaulding Rehabilitation Hospital was 234 kBtu per square foot.

An on-site cogeneration plant burns natural gas to produce thermal energy and electricity. To make the harborside facility resilient to rising waters due to climate change or flooding from a major storm like Hurricane Sandy, this critical infrastructure equipment is located on the roof.

The gymnasia and social spaces are naturally ventilated. The building management system automatically opens or closes the windows in these areas in accordance with current weather conditions. This system, which can be overridden manually, if necessary, not only saves energy that might otherwise be spent on mechanical cooling, it helps patients to build stamina through exercising in ambient conditions, Guenther says. And it allows patients and staff to hear boats, seabirds and other harbor activity, providing a meaningful connection to the outside world.

Comprehensive zoning enables the building management system to power down the mechanical system in specific parts of the hospital when possible; for example, in patient rooms that are unoccupied during the day while patients attend therapy sessions elsewhere.

The hospital was constructed on a reclaimed industrial brownfield site. Hospital President David Storto says the remediation of the land, while extensive, seemed fitting for an institution whose mission is rehabilitation. Through the remediation process, "the building took on an incredible merging of program and place, in an exceptional way," says Guenther.

David Storto, president, Spaulding Rehabilitation Hospital, says one of the top priorities in the development of the organization's replacement facility was "to have a hospital that would be a model for inclusive design for people of all abilities."

Built on a site overlooking Boston Harbor, the hospital is subject to Boston Redevelopment Authority regulations that protect public access to the waterfront. In the design of the building, "75 percent of the ground floor had to be public, because they're really trying to encourage the waterfront to be for all Bostonians," explains Robin Guenther, principal, Perkins+Will. While this requirement would have been a disincentive for many developers, "it really connected to Spaulding's mission," Guenther says.

Opening much of the fully accessible building and site to the local community creates opportunities for patients, their families and the public to interact and become more comfortable with one another.

"Part of what we were aiming to do was to be able to have people better understand rehabilitation, to have people not be as fearful of physical disability," Storto says. As people who work or live in the area dine in the hospital café, hold meetings in the conference rooms, picnic on the patio and use the accessible waterfront trail, "it fosters a lot more familiarity with the whole rehab process," he notes.

The facility's public access "is really starting to break down some social barriers people have had about people with disabilities," says Jessica Stebbins, IIDA, LEED AP, associate principal, Perkins+Will. "It's quite inspiring, actually. There's more of an acceptance."

Storto says open communication with local residents during the design process allowed the hospital to evolve "from being a developer in the community to being a neighbor." Now, he says, "we're being flooded with people living in the community who want to be volunteers."

Getting ready for ASHE's annual conference