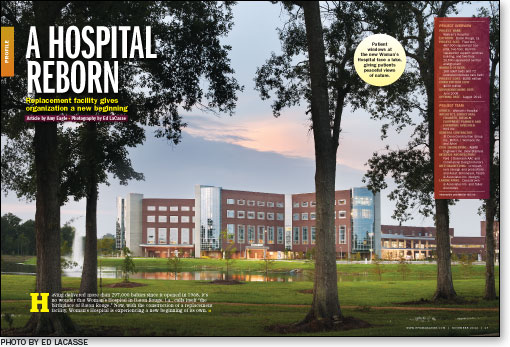 Having delivered more than 297,000 babies since it opened in 1968, it's no wonder that Woman's Hospital in Baton Rouge, La., calls itself "the birthplace of Baton Rouge." Now, with the construction of a replacement facility, Woman's Hospital is experiencing a new beginning of its own.

According to Teri Fontenot, FACHE, president and chief executive of Woman's Hospital and chair of the American Hospital Association's board of trustees, the hospital no longer could expand on its original 24-acre site and past expansions had left the building with inconvenient, insufficient parking; departmental adjacencies that did not work well for patients and caregivers; and no room for ancillary departments to grow. The facility could not support the latest clinical technology or care models, and new physicians who wanted to practice at the hospital's medical office building could not, due to lack of space.

"We felt that starting over on a greenfield site would allow us to do all the things that we need to do, plus it would help position us for growth in the future," says Fontenot.

The new 225-acre site, formerly a golf course, provides the retreat-like setting the hospital wanted for patients. With only 85 acres in use, the medical campus leaves plenty of room to grow.

The building is oriented toward a lake, which provides a scenic backdrop for the hospital dining area and all four patient towers. Parking areas are arrayed around the front of the hospital and adjacent medical office building, with multiple entrances for the convenience of patients, visitors and staff.

The facility design translates the ideas of traditional Louisiana architecture into a form that is suited to a large modern hospital. Metal columns and trellises at the entrance "represent the welcoming front porch of the Southern tradition," says Jeffrey C. Stouffer, AIA, principal and senior vice president, academic and pediatric practice leader, HKS. The columns are also reminiscent of piers used to elevate older Southern buildings to improve airflow, adds Jack Ford, AIA, IDSA, vice president, HKS. Curtainwall, used most prominently in curved panels at the ends of the patient units, gives the building an open form in keeping with traditional Louisiana design vernacular. The curtainwall and metal design elements provide a contemporary edge to the custom blend red brick also featured on the exterior.

Interior materials include wood, wood-look laminate, stone with a pattern of ocean blues and grays, cloud-colored onyx and earth-toned granite. These warm, natural materials are juxtaposed with metal column covers and contemporary lighting to intensify the characteristics of each. Straight lines and curves, representing masculine and feminine principles, are similarly juxtaposed throughout the building, in paneling, flooring and the overall shape of the hospital. "That motif is basically woven throughout the design," says Ford.

Curved interior spaces are meant to give the design movement for more intuitive wayfinding and to create a more comfortable spatial experience. Details like dots of light behind the lobby reception desk or a band of color that runs like a river through the carpeting of patient units, provide what Ford calls, "the surprise of joy." 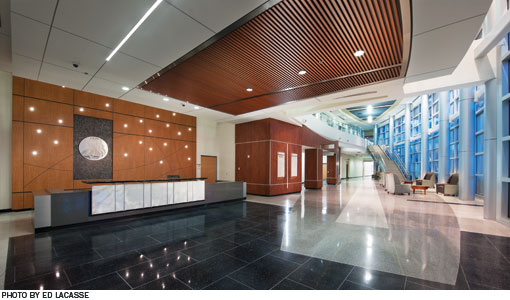 Staff nurses were given the lead in designing patient rooms. "The first exercise we did was a series of mock-up workshops that centered around the different types of patient rooms. And [the architects] were not allowed to participate. We had to watch and document," says Stouffer. Staff members used movable walls and duct tape to define the perimeter and layout of a universally sized room, considering foremost the clinical and family processes that need to take place in each room. As they worked, architects digitally recorded and refined the design to give everyone an idea of how the rooms might be arranged in units.

The resulting 400-square-foot private rooms are trapezoidal in shape, with inboard toilets built along the patient headwall to reduce falls; large windows toward which patient beds are angled; and distinct family space. The rooms are laid out in triangular, 12-bed units designed for patient visibility, staff efficiency, central storage and views of the lake and outdoor spaces.

Fontenot says lighting controls and reduced noise in the private neonatal intensive care rooms have resulted in calmer babies, and the increased privacy is helping families to bond and encouraging mothers to breastfeed.

The four patient towers, which eventually may be joined by a fifth master-planned unit not yet built, form a unique design in the shape of a starfish. A rectilinear diagnostic and treatment block is integrated into the ends of the triangular units. This design reduces the travel distances between patient beds and diagnostic and treatment spaces and will be efficient to expand, says Stouffer.

Support services and the central utility plant are located in adjacent structures that were built separately, to take advantage of efficiencies from different occupancy types, exterior materials and finishes. 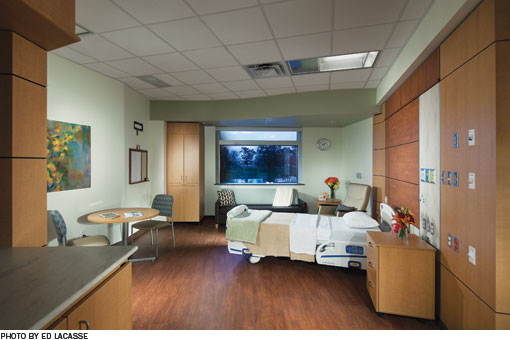 Fontenot says the collaborative design approach, while time-consuming, has paid off in the end with a building that is "very functional for us." She says community members feel close to the institution, through their familiarity with its childbirth, cancer care and general medical-surgical services. "The community is very excited about the new facility. It's so striking and beautiful. It's been very highly received," she says.

Amy Eagle is a freelance writer based in Homewood, Ill., and a regular contributor to Health Facilities Management.

In 2005, during Hurricane Katrina, Woman's Hospital, Baton Rouge, La., sheltered 121 neonatal intensive care babies from hospitals affected by the storm, delivered 150 more babies and admitted more than 500 additional patients. In 2008, Hurricane Gustav damaged electrical substations serving Woman's Hospital, causing the facility's air conditioning system, which was not powered by emergency generators, to be out of service for several days. This year, as Hurricane Isaac bore down on Woman's Hospital's replacement facility, which had been open just 24 days, Teri Fontenot, FACHE, president and chief executive officer of Woman's Hospital and chair of the American Hospital Association's board of trustees, says, "We felt confident."

The structure, built of sturdy brick and impact-resistant glass designed to withstand winds of 110 miles per hour, easily stood up to the storm. Increased emergency generator capacity kept the air conditioning humming despite an area power outage lasting nearly 12 hours. "We were appreciative of having generators to run our air conditioning. We learned after Gustav that in south Louisiana air conditioning is not a luxury, it's a necessity," says Fontenot.

Douglas Lacy, P.E., senior associate with mechanical/electrical engineering firm ccrd, Dallas, says the hospital can run any or all of its chillers on the emergency power system, a design that surpasses code requirements. The system features three 2-megawatt generators, with room for one more to be added in the future. All of the hospital's generators and switchgear are located indoors, on the second floor of the central utility plant, safely above the region's 100-year floodplain. Automatic transfer switches are on the second floor of the hospital.

Woman's Hospital also is designed with the surge capacity to take in displaced patients and their families during a catastrophe, as happened during Hurricane Katrina. Headwalls in the neonatal intensive care unit are designed to support multiple patients, so the private rooms can become semiprivate rooms if needed.

Woman's Hospital in Baton Rouge, La., is designed to meet the needs of all patients and their families, from those experiencing the joy of bringing home a baby to those dealing with the sorrow of a major illness or injury. "In this hospital, they have an obligation to be celebratory about a new baby. You just have to be sensitive in the design that you aren't forcing those two patient populations to come together unnecessarily," says Jack Ford, AIA, IDSA, vice president, HKS Inc., Dallas.

At the existing hospital, the main lobby served as the admitting and discharge area for all patients, as well as the ambulance drop-off. "It was not a very good situation," says Teri Fontenot, FACHE, president and chief executive of the Woman's Hospital and chair of the American Hospital Association's board of trustees.

The project team worked to give the replacement hospital a more compassionate design that allows for the separation of maternity, medical-surgical and urgent care patients. "Particularly for mothers who are not leaving with a baby, it's very upsetting when they're being wheeled down a public hallway next to someone who does have an infant," Fontenot says. "People undergoing cancer treatment don't need to be next to a family that is jubilant."

A separate ambulance entrance is located between the two discharge lobbies. "Patients who need emergent or urgent care, or are in labor, come into a more private area that's designed for them," says Fontenot.

Patient units also are separated by patient type, with medical-surgical and oncology patients located on a different floor from the obstetrical and postpartum patients.