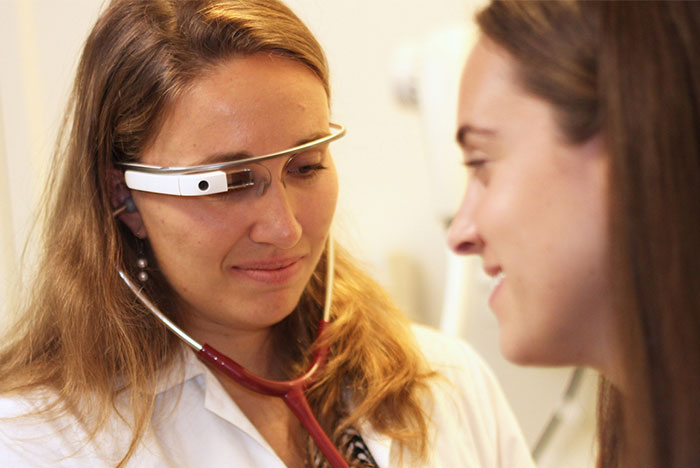 The entrepreneurs at health startup Augmedix believe they have found a solution to doctor dissatisfaction related to electronic health records (EHRs), and it’s a pairing of Google Glass and specially trained scribes in San Francisco and India, as described by The Washington Post.

Augmedix has raised more than $36 million from venture capitalists and health systems, including Dignity Healthy and Sutter Health, owners of Palo Alto Medical Foundation. The company distributes Google Glass to organizations with which it contracts, and physicians wear the technology during patients exams. The real-time video is transmitted directly to one of the 200 scribes who plug doctors' notes into the patient’s EHR while also answering doctors’ questions, such as: When was the last time this patient had a checkup? The exact date then pops up within the Glass’ lens.

About 500 doctors in 27 states use Google Glass. Sutter Health says the technology saves doctors two hours a day. The company’s chief executive, Ian Shakil, says they envision a future where the transcribing is outsourced to machines.

“There aren't enough scribes in all of South Asia to serve the nearly [1] million doctors here,” Shakil says. “Uber has driverless cars. One day, we’ll have scribeless scribing.”

Thomas Jefferson University Hospital is launching cognitive hospital rooms powered by IBM Watson Internet of Things (IoT). In-room speakers with voice-recognition technology are being deployed in patient rooms to give them more control over their hospital stay. Patients can control features such as light, window blinds and temperature using natural speech, such as “make the room warmer” or “play waterfall music.” They can even inquire about the facility or even get background information on doctors.

“Being in a hospital can often be a hectic, anxiety-ridden, or even intimidating experience for patients and their loved ones,” says Neil Gomes, vice president for technology innovation and consumer experience at Thomas Jefferson University and Jefferson Health.

Check out the video below to see how it works.

The Rocking Horse Community Health Center received a $52,000 grant from the Department of Health & Human Services (HHS) to improve its health information technology. The health center says the grant will be used to integrate voice-recognition software into its medical records system.

It will allow physicians to dictate information directly into a patient’s chart rather than having to spend time typing documentation. The grant is part of a nationwide effort in which HHS recently provided more than $87 million in funding for health centers to improve technology.

Advanced technology ensures that no patient is left behind.