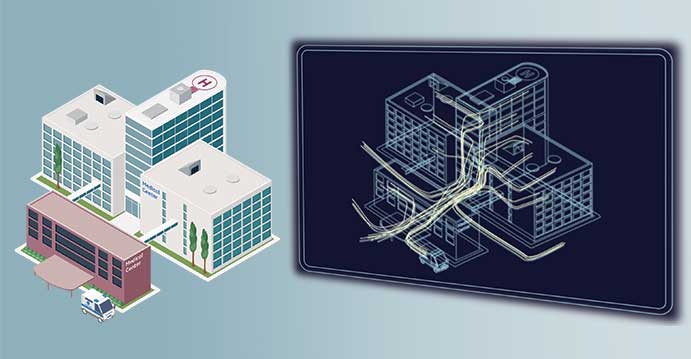 ‘‘What we’ve increasingly observed is that the advances in medical technology and care protocols are evolving faster than we can build,” says Thomas Quigley, senior principal and director of health care, HOK, Washington, D.C.

Over the past two or three years architects have begun to recognize that the care delivery process they were designing around and to great precision — or the Swiss watch syndrome — may not exist for long.

“Instead, modern design is about building something that can adapt and change to accommodate new processes and care methodologies over its life rather than trying to do a superb job around what they do today,” Quigley says.

The solution is to plan for flexibility through modular designs that accommodate plug-and-play technology and for as long as possible, Quigley says. That’s a priority along with achieving positive patient outcomes and satisfaction in the age of new reimbursement rules.

To that end, HOK is designing a new Midwestern hospital that will optimize patient care and staff workflow by dividing spaces in terms of planned and unplanned patients rather than the standard inpatient and outpatient groupings.

“While it seems counterintuitive to potentially duplicate clinical settings and technology, there is growing evidence that suggests the disruption of highly efficient care has unintended operational implications and costs,” he says.

The new patient tower at Gundersen Health System, La Crosse, Wis., maximized workflow efficiency and reduced patient care costs by designing the system of operations before the building itself.

To accomplish that, Gundersen enlisted the help of GE Healthcare Partners, Chicago, to make design recommendations based on its application of Lean-based principles and predictive analytics linked to simulation technology.

GE used its Hospital of the Future Digital Twin software to evaluate the health system’s care delivery process in several departments in its existing facilities and came up with several recommendations. One workflow change reduced nurse travel time by 40 percent. Another recommendation called for creating separate corridors, elevators and staff support space to serve patients as well as to transport supplies and materials, a concept known as offstaging.

“There has been a trend in health care to create segregated spaces between the staff and the patients so they don’t have to deal with the noise and the disruption, all those things that are happening behind the scenes that don’t add value to their experience,” Eveloff says.