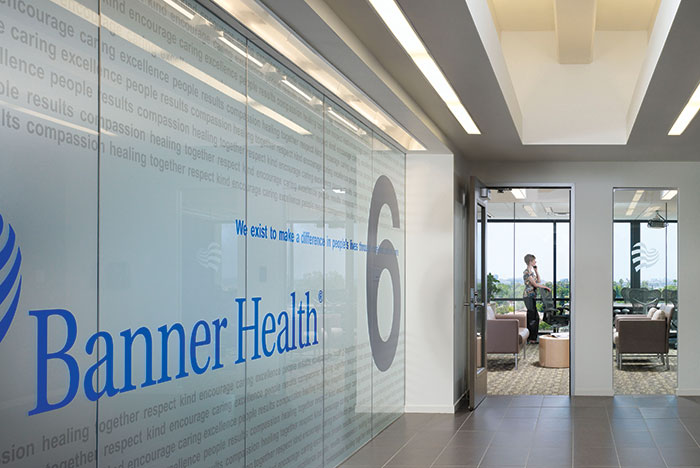 Only the elevators and exterior envelope of the existing building were kept for the Banner Health project in Mesa, Ariz.

Dotting the landscape throughout this country are underutilized or shuttered health care facilities. Although there are no hard data detailing their provenance, many likely were built between the late 1940s and late 1980s and can be traced to the Hill-Burton Act of 1946, which ignited a health care building boom.

What becomes of these buildings that are mothballed or rendered obsolete by an array of circumstances and challenges that includes everything from declining reimbursements to a rapidly changing model of care to deferred maintenance?

Tired building stock should be renovated, redeveloped or razed. Coming to any one of these decisions, though, can be a difficult process, muddled by an uneasy confluence of deferred maintenance, financing, program needs, public opinion and often a vision that is too narrow for what’s possible.

The last of these roadblocks can be particularly vexing because renovating and redeveloping outmoded hospitals isn't typically part of a health care organization's area of expertise. But, with the right professional assistance and examples provided by successful repurposing projects at other hospitals, health facilities professionals can begin to explore alternative uses for obsolete facilities.

Before visioning sessions begin, hospitals and health systems first should revisit some of their existing beliefs and protocols surrounding real estate decisions. 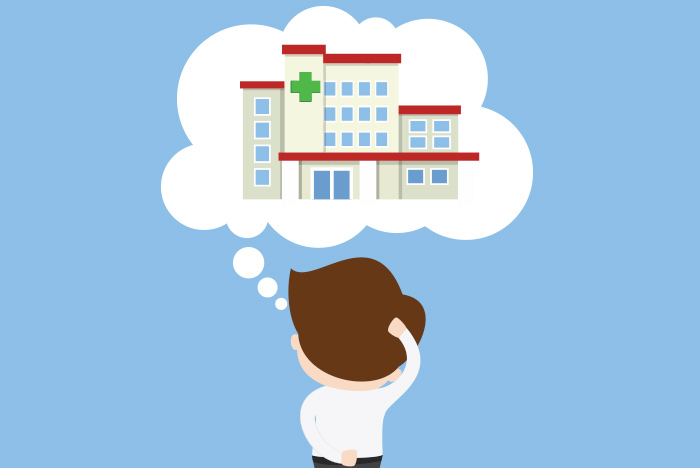 Even though the idea of developing property or working with a developer may seem outside the mission of delivering care, it’s important to be open to different models of real estate delivery and operation to take advantage of the full spectrum of opportunities around these outdated assets.

Focusing on the needs and desires of patients and serving staff can help to identify the larger role a hospital can occupy in the life of a city or community. So, it may be that a health care system becomes a landlord to retail and food tenants, because that’s how it’s able to develop the brand it’s trying to become — more lifestyle focused. It becomes a larger, more holistic and human-based business decision.

And, accordingly, the project team needs to reflect a more expansive focus. It’s not just about picking a team of architects, planners and facilities managers. A hospital or health care system that’s considering a major repositioning needs people who can calculate capital expenditure and operating expense, who understand catchment area, market trends and demand, and who can create a business plan.

Any such conversation should involve not only the facilities manager, but other stakeholders including the C-suite; finance and accounting departments; real estate brokers; human resources; and various user groups. All voices should help to shape a project’s vision, goals and drivers.

In general, hospitals can be difficult to renovate because of their deep floor plates and enormous cores, which are necessary to hold such infrastructure as elevators and stairs. On the plus side, their floor-to-floor heights are generally taller than those of an office building, which opens up any number of possibilities for adapting a hospital to a new purpose that’s still within the realm of health care. 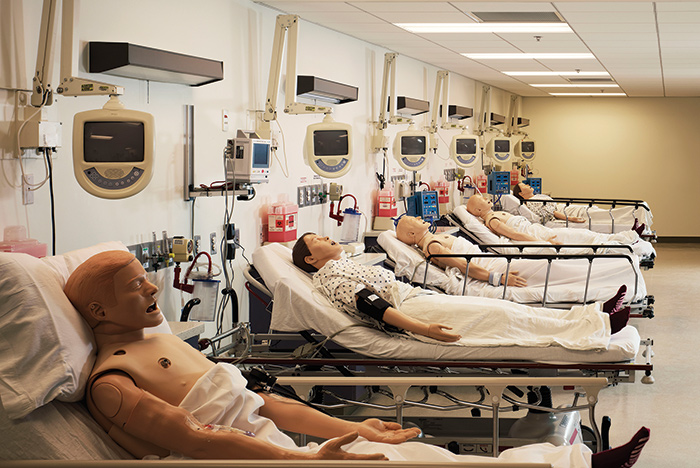 Banner Health, based in Phoenix, exercised that kind of creative revisioning with a decommissioned nine-story hospital building in its portfolio. It transformed the former Mesa (Ariz.) Lutheran Hospital into a simulation center and administrative building, and moved in 1,200 employees who had been scattered in various buildings across greater Phoenix.

In the end, Banner leveraged an owned asset to consolidate its portfolio, enabling it to terminate multiple leases and improve operating expenditures.

The old hospital — built in the 1960s, closed in 2007 and replaced by a new Banner facility in nearby Gilbert — was a good specimen for such a remake. It had a rational floor plate, an interior that could be scraped clean and an exterior envelope that was in good shape.

Only the elevators and exterior envelope were kept intact. A new universal floor plate was inserted for maximum flexibility and cost efficiency. The former hospital, which had been called a “Mesa landmark for 44 years” by one local paper, had been reincarnated.

Most renovation scenarios aren’t this straightforward — hospitals tend to evolve over time, often as a series of interconnected buildings. A domino effect kicks in when any one or more of the pieces are rejiggered. And thus, more strategic master planning must be involved.

An urban hospital in the Midwest recently faced this kind of domino challenge with a legacy hospital building. The complex comprises four attached buildings, the original of which was built in the 1920s, the others added and expanded in the 1950s, 1970s and 1980s.

The complex is not fully occupied, saddled with several million dollars in deferred maintenance and has a significant number of short-term leases expiring soon. Additionally, the owner doesn’t have significant capital to invest in the building, which adds to the challenge.

Brainstorming sessions with the project team were used to identify overarching drivers and long-term goals. These helped to define a strategy for approaching three extreme scenarios: sell, demolish or fully renovate. Ultimately, each of these baseline options was eliminated because of cost or because the owner would lose control of valuable land on its campus.

The ultimate solution proved to be less obvious. It was found in a hybrid option that rescaled the complex: parts of the building would be demolished, and the remaining portions would undergo a major consolidation, which included a significant restacking of the existing program.

It was one of four hybrid options considered and not the least expensive. But the solution most closely aligns with the owner’s goals, maximizing the building’s footprint on the campus while creating a prominent corner lot for redevelopment. Creating a sense of place for the community was essential. 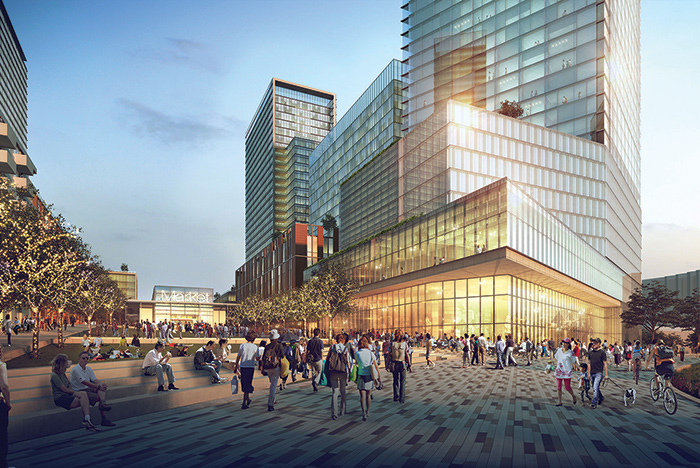 The 20-year plan for the Central Health campus in Austin, Texas, transforms the campus into a mixed-use development including retail, office and hotel space. The plan is to knit the campus back into the fabric of the surrounding neighborhood including being anchored by a new public market (lower right) where the public will be able to shop and eat.

When a building has outlived its useful life as a hospital and the land is worth more than the building, repurposing the land should be considered seriously. If it’s about the highest and best use of an asset, the decision to redevelop becomes an economics equation.

Central Health in Austin, Texas, offers a lesson on how to create and roll out a redevelopment plan with a wide and long vision. The organization is repurposing its 14.3-acre Brackenridge Campus in revenue-producing phases over 20 years.

Like the previous example, Central Health’s Brackenridge Campus has a significantly aging infrastructure and limited capital. A bed tower, medical office building and emergency department (ED) all carry sizable deferred maintenance. On top of that, Seton Healthcare Family, the current operator of the Brackenridge Campus, will be vacating the property this month and relocating to the new Dell Seton Medical Center at The University of Texas at Austin.

Unlike the previous example, Central Health has benefited greatly from the boom in the town in which it is located. The land value of the Brackenridge campus — prime real estate within Austin’s central business district and situated just south of the University Medical Campus — has skyrocketed in recent years.

The project team considered a range of reuse options, including non-health care uses for the Brackenridge buildings, because the owner was open to that possibility. Most did not pencil out. Even office space, which is typically a revenue-generating proposition, didn't make financial sense. To support Central Health’s core mission, which is to close the health care funding gap for the underserved, monetizing the property by redeveloping it to its highest and best use proved the only long-term solution.

Because Central Health is not a developer, it has begun the process of soliciting a developer partner who will ground lease the full campus property. Central Health’s goal is to work with the developer to realize at minimum the adopted master plan, which depicts a final phase, mixed-use development of nearly 4 million gross square feet.

What was once a sealed-off campus now will be restitched into the urban fabric, re-engaging with the public. The master plan calls for the reopening of long-closed streets to reconnect the campus to the surrounding community and to promote it as a new destination in Austin. Because community engagement was key to the plan’s success, the project team involved a full range of stakeholders, including the commercial development community to discuss the development’s viability.

The master plan also calls for a 20-year rollout. The phased redevelopment was designed to support interim uses (e.g., a clinical education center and psych ED) in the short-term while phasing out such structures as the hospital tower, ED and medical office building in the long-term.

New programs will be added along the way, enticing the community to visit this new district. Among the new programming: a hotel as well as retail and office components and a public market, a place where people can visit, shop and eat healthy foods. It’s all meant to make a statement about the future of Austin.

The most difficult thing to reconcile in this conversation is the reality that not all legacy buildings are worth saving.

Architects and other practitioners are taught that the most sustainable, responsible option is to reuse existing infrastructure. From a carbon footprint standpoint, building reuse consumes less energy than new construction. And given that many of these shuttered hospitals are architecturally significant properties, saving them seems, on the surface, the right thing to do.

But Central Health teaches an important lesson about negotiating outmoded real estate assets: Sometimes demolition is the only viable option. At the end of the day, these are real estate assets governed by market forces and financial realities.

With a vision in place, the project team then can weigh the many options available to organizations that are seeking to repurpose health care real estate.

Michael Hanley, AIA, LEED AP BD+C, is senior associate, and Randy Guillot, FAIA, LEED AP, is design director, at Gensler, Chicago. They can be reached at michael_hanley@gensler.com and randy_guillot@gensler.com.

Keeping up with changes in health care real estate