Water filtration truck is fit to serve in an emergency 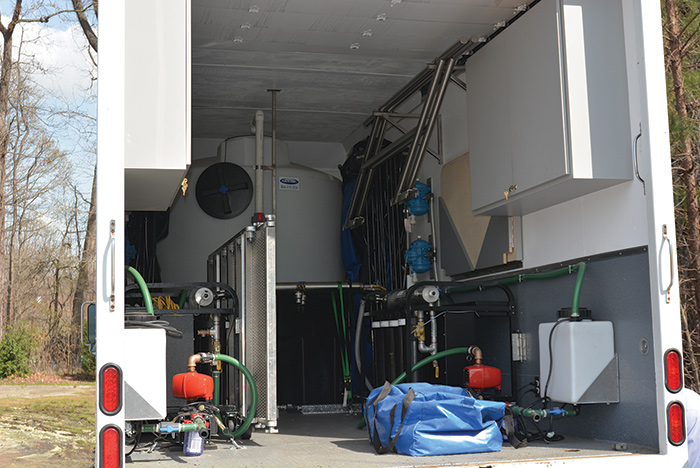 A disaster, emergency or any disruption that causes even temporary loss of water supply easily could cripple the ability for a hospital or other essential services to keep functioning.

With that in mind, the Duke University Hospital's Disaster Medical Response Program acquired and outfitted a box truck with a water filtration system capable of pumping 2,400 gallons of potable water an hour.

With its water filtration truck, Duke has a rare and vital asset in the state’s disaster response system. The 27-foot truck’s container area is equipped with two separate water filtration systems along with a 1,200-gallon water storage tank that makes the truck distinctive for its capacity.

“Others may have one or two water filters and they might be able to purify some water,” says Jason Zivica, emergency management coordinator, Duke University Hospital. “We built this so that we have a storage tank built into it. We can fill up that tank for mass filtration of water so we can provide it to whoever needs it.”

The system can filter almost any water supply. The reclamation pond on the hospital’s campus or water supplied by a nearby county fire department are potential sources. The truck stores foldout holding containers that can be filled with non-potable water and then filtered.

The filtered water can be used for a multitude of purposes such as cleaning dishes, flushing toilets, handwashing and more, Zivica says.

The truck is intended to supply filtered water for one or two days until regular water delivery is restored. “It’s meant to be a temporary solution to a bigger problem,” he says about the vehicle.

The truck has not been pressed into duty yet, but was tested during a recent training exercise. It performed perfectly, he says.

It took about two years and an estimated $140,000 in state and federal grants to outfit the truck with the necessary equipment. When a materials management department truck at Duke University Hospital became available, the emergency medical response program had a key piece it needed.

North Carolina has in its state disaster response program a regional-based disaster preparedness coalition sponsored by Duke and state emergency medical systems. Duke is one of eight hospitals in the state that serve as lead facilities in the program.

About five years ago, the coalition became concerned about readiness in the event of a water outage that would impact a health care facility or other critical services in the region or state, Zivica says.

The 27-foot truck will be used to aid health care facilities in North Carolina.

Wellness center is a good fit