Four construction trends and how they affect the health care market 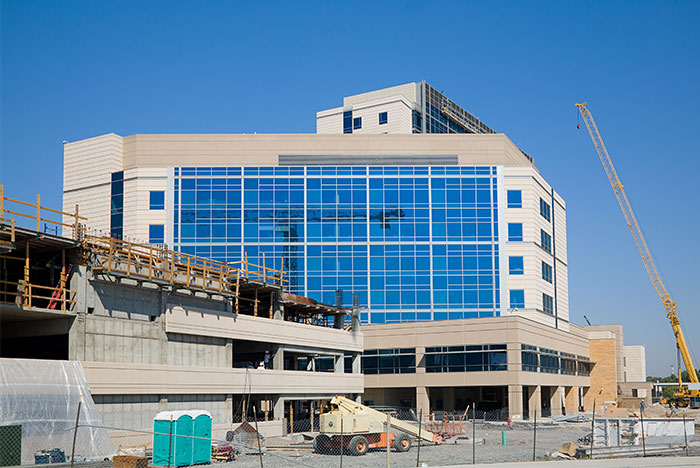 The expected growth in the health care construction market over the next few years could present some challenges for the building industry.

Construction in the health care industry has seen an uptick in the past year and is poised for even more in the coming months. In 2016, the entire construction industry grew — and the health care sector along with it — adding to the number of projects started and the amount of money spent. The forecast predicts more growth in the coming years, with a steady increase projected through 2020. Shifts in patient delivery methods, an aging population and keeping up with changing technology are key drivers spurring an increase in new construction and renovation.

Now more than ever, staying up to date with construction industry trends is a key best practice in maintaining top-of-the-line health care facilities. Falling behind in these trends can lead to bloated budgets, blown schedules and projects potentially being scrapped altogether.

Construction industry development is on the rise, which makes staying up-to-date with trusted data even more crucial. Data can help hospitals to prioritize and plan for the work that needs to be done.

For instance, Gordian’s RSMeans data found that from 2016 to 2017, 79 percent of average material costs changed from a 5 percent decrease to a 5 percent increase. Further, 21 percent of average material costs experienced a change in price greater than 5 percent. Assuming that construction material prices remain stable or change uniformly across the board is a mistake that can greatly impact budgetary planning. In fact, since 2012, only 2.11 percent of materials prices have seen no change.

To gain some insight into the complexities of pricing, let’s look at structural steel. Research indicates that compared with numbers from last year, the cost of structural steel was slightly down. Several factors could play a role in this change, but since the change was only slight, the reason could be as simple as delivery costs — fuel prices are down, allowing for delivery to have less of an impact on overall cost. On the other hand, there’s an argument to be made that a decreasing demand in international markets, specifically China, has played a key role in these lowered prices. Another example: There has been a shortage in the resins used in PVC pipe, which has led to price increases on pipes and fittings. While some suppliers will absorb these increases, other will pass them along to their customers.

The fact is, there is no skeleton key that unlocks a pattern for construction material prices year over year. Implementing a cost-change factor across the board could be disastrous and would lead to flawed budgets and estimates. Many factors play a role in material price changes, ranging from economic conditions, geography and even weather. It would be a best practice for health care facilities to stay up to date with cost data to ensure accurate estimates and reliable budgets.

The labor shortage is one of the biggest dilemmas facing construction, touching nearly every aspect of the industry. Tied to the aftereffects of the recession, the roots of the qualified labor shortage took hold around 2010. At this time and for about a two-year period that followed, jobs were wanting for the average worker in the industry as the number of construction projects decreased substantially. This led to a departure of a significant contingent of the labor force (especially craft laborers) to other industries.

Fast forward to the present and, according to FMI’s U.S. Markets Construction Overview 2017, health care construction spending hit $41.4 billion in the U.S. in 2016, representing about 4 percent of total construction spending ($1.2 trillion). This amount is predicted to grow by 4 percent this year, to about $43 billion, and is forecast to rise 5 percent annually through 2020, when it will reach $51.1 billion. This indicates that there are jobs to be had. However, since that departure of craft laborers, that gap has not been filled.

Contractors are now in competition to fill a wage gap. In major cities, this is exceptionally the case with “megajobs” such as stadium projects and corporate headquarters taking in a large portion of the workforce.

To stay afloat, contractors are looking for ways to attract workers. This has led to a competitive wage market as well as improved benefit packages for workers. Craft education programs are on the rise as employers look to train internally to fill the highly sought skilled laborer positions in areas such as concrete, steel or solar construction. Programs like these also have been implemented to help attract millennials, a demographic not well-represented within the industry. Companies have found that setting up career path programs has been beneficial in getting young people excited to join construction.

Processes have been changing across the board, and collaboration increasingly has been noted as an essential factor to project success within health care construction. Collaboration fosters a team environment, builds meaningful relationships and ensures that objectives are aligned all while increasing efficiency, especially when other factors like the labor shortage are in play.

However, the traditional delivery method does not always lend itself to the highest level of collaboration. This has led to alternative delivery methods being leveraged to take advantage of a collaborative process.

Take, for example, job order contracting, a construction procurement process that is ideal for use on renovation and alteration work. Instead of dealing with the time and expense of bidding each project separately, with job order contracting, the contract already has been competitively awarded for an indefinite number of projects, enabling contractors to respond quickly and construction to begin faster.

Construction managers, architects and consultants are being brought together onto projects much earlier than seen previously, often early on in the design process. This allows experts in the room to identify pitfalls that might not have been noted otherwise, ultimately shaping the trajectory of the project in a positive way. With this process, the facility owner and the contractor are on the same page, placing a limit on unnecessary change order negotiations that threaten to bloat budgets and force projects off schedule.

According the Job Order Contracting Performance Study by Arizona State University, 96 percent of projects were completed with satisfactory results and, through streamlining the bidding process, 87 percent of projects were delivered on time. Further, owners estimated a 24 percent administrative cost savings and contractors estimated a 21 percent overall cost savings. On top of this, owners found the process 76 percent more flexible, which plays a major role in decreasing change orders. Owners also reported 30 percent more transparency with job order contracting when comparing other delivery methods.

Transparency is key. Without it, there is no collaboration. With it, there are now multiple parties working as partners toward a common goal. In the big picture, this leads to savings in time and cost, allowing for operational efficiency and cost reductions critical to financial stability.

Staying on the cutting edge of technology is, of course, essential in nearly all industries. Construction is no exception but, historically, there has been pushback on project sites in an attempt to maintain the status quo. However, with the opportunities to optimize work processes and increase the value of work being performed, falling behind in this space would be a major missed opportunity.

For instance, virtual reality offers groundbreaking advantages never before experienced on construction sites. Facility owners can have walkthroughs through virtual buildouts of sites and can give contractors real-time direction and changes before irreversible work is put into place. This can save owners time and major dollars over the course of a project.

Drones are being used to map project progress as well as monitor sites for safety purposes. Augmented reality through wearable devices also can display unsafe locations on job sites to increase site safety. And, automation via robots continues to increase, especially in simple or dangerous jobs. Expect automation to increase further to combat the labor shortage.

Simply put, as technology continues to advance, construction sites of the future may look quite foreign to our modern eyes.

A plan for the future

The construction labor shortage does not look to be going anywhere anytime soon. So, maximizing resources and enacting streamlined processes is more important than ever. With more projects on the horizon and more money being spent to keep current facilities relevant while also building new ones, staying current on construction industry trends is essential for those in health care planning and construction.

Being up to date affords decision-makers the ability to set themselves apart and tap into industry growth, while allowing those in the health care industry to validate estimates and plan construction, renovation and maintenance work more effectively. Armed with the right resources, those who plan and construct can be part of the growth trend in the health care construction industry.

Douglas Gayden is the director of health care for Gordian. He can be reached at d.gayden@gordian.com.