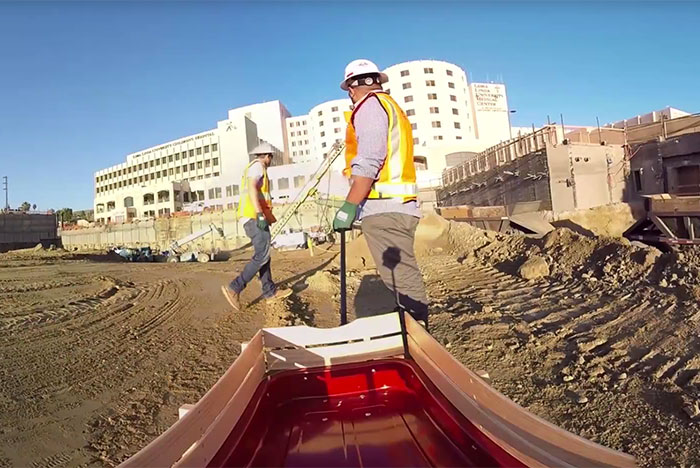 Loma Linda University Health Children's Hospital has teamed with McCarthy Building Cos. to create a virtual tour of the construction site for pediatric patients.

With all the vigorous activity involved in building two new hospital towers, Loma Linda (Calif.) University Children’s Hospital officials wondered if there might be a way for their young patients to virtually experience the construction work right outside their windows and maybe ease any anxiety they had, too.

That idea is about to come to life, thanks to a collaboration between McCarthy Building Cos. and Loma Linda University Health (LLUH), which is nearly set to introduce virtual reality-based therapy as a medical treatment at its children’s hospital.

Kiti Randall, LLUH’s director of psychological services for the department of pediatrics, and her colleagues, together with McCarthy’s expertise in virtual reality, have developed a virtual-therapy session that takes children into real-world construction to help reduce their anxiety and pain.

“The children place a virtual-reality (VR) headset on and are virtually transported to the project construction site as if they were walking on the site,” says Eric Hoffman, McCarthy’s project director on the Loma Linda University Health construction project.

This is no ordinary job either. The project will include nearly 1 million square feet of new construction and is a major part of the health system’s Vision 2020 strategy to combine the latest research and best health care practices.

“The children are taken on a virtual tour of the project, hosted by McCarthy Superintendent Max Klingler,” Hoffman continues. “When wearing the VR headset, the children have a 360-degree view of the project site, they can look around, take the job site tour and truly feel [as though] they are a part of the project.”

The VR experience has an educational aspect, too. “They get to discover how hospitals are built and learn about the hospital construction project that is just outside their room in the existing hospital facility,” he says.

While the VR therapy so far has been used with a limited number of patients until the program is fully launched, response by children who experienced it and their families has been positive, Randall says.

The therapy is geared for children about 6 to 14 years old and who are experiencing discomfort related to their diagnosis or treatment and for whom VR therapy is appropriate. Research shows that VR therapy has increased positive emotions and decreased negative emotions in pediatric populations.

LLUH’s use of VR as a therapeutic tool is unique because videos shown will be related to the construction site at the hospital rather than a virtual experience of a pleasant, but fictional, event, which is often used with kids. “It’s one thing to use technology to escape reality, and there are benefits to that,” Randall says. “But if you can use it to develop a way to handle your reality better and make relationships and make connections, that’s what we really wanted to do.”

Workers on the construction site will be an important part of the VR experience. Randall says the opportunity for the kids to become engaged with some of the workers is a distinct part of the hospital’s use of VR therapy.

Even if the pediatric patient doesn’t get to meet the worker, says Randall, “The child can say, ‘I really want to see what Max is saying about what’s going on with the construction’ and watch the tape and see him again.” McCarthy has offered to make the workers available to meet the kids and hopes the VR experience will pique their interest in the industry.

McCarthy will produce new videos for the VR therapy as the construction progresses. The project is scheduled for completion by 2021.

Advanced technology aims to help patients right where they are.

Lucile Packard Children’s Hospital Stanford expansion is on track to open in December.