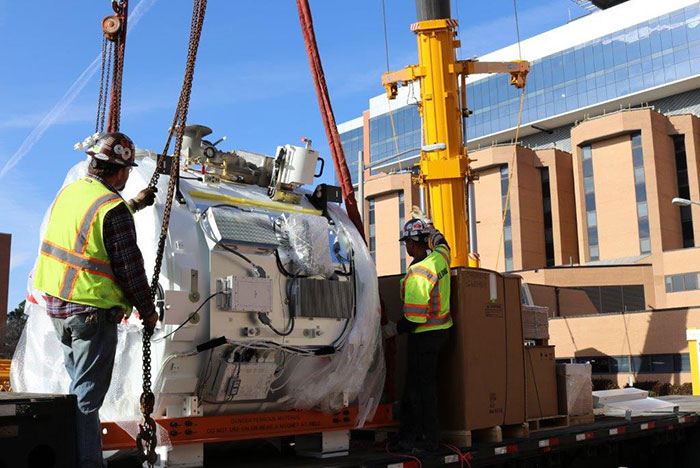 The 11-ton iMRI is part of Sentara's OR modernization project.

The hospital hit a milestone in its OR modernization efforts this past weekend when it moved an 11-ton GE Intraoperative Magnetic Resonance Imaging (iMRI) magnet onto its third-floor surgical suite.

Moving the $4.3 million piece of equipment into the hospital took a measure of surgical precision. Flatbed trucks arrived at the site Friday evening to erect the 276-foot-tall lifting crane using a helper crane. The crane mobilization and set up was estimated to have taken up to 10 hours, while the lift itself took two to three hours.

The iMRI was drifted onto the third floor near the surgical suite, placed on straight and swivel casters and pushed by construction crew members into its proper place. 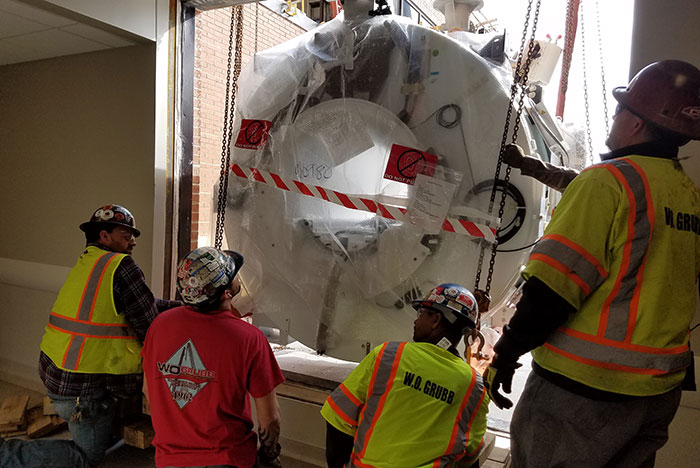 The medical equipment was lifted and moved into the hospital through a third-story window.

iMRI provides high-resolution, real-time imaging during surgical procedures, especially brain surgery to remove tumors. By providing iMRI during neurosurgery, clinicians can distinguish between tumor tissue and normal tissue, minimize disturbance of healthy tissue or critical areas of the brain, evaluate and confirm their results and make adjustments during a procedure without moving the patient.

During the lift, the construction team led by Whiting-Turner took several precautions to ensure safety, and protect the equipment and facility.

Lexan sheets were placed on the floor to protect building integrity, while the crane operator used a two-way radio to coordinate with the Nightingale Regional Air Ambulance dispatcher based at the hospital to ensure the project did not interfere with patients being transported to the hospital. Sentara’s helipad accommodates approximately 1,700 evolutions annually from Nightingale, the U.S. Coast Guard and the U.S. Navy. The hospital is planning a new helipad roof on top of its Kaufman wing with a dedicated elevator to the trauma center in the ED.

The hospital’s entire addition and modernization project is designed by HDR Architects and is engineered for resiliency. For instance, the expansion project includes the latest protective measures against sea level rise in collaboration with the City of Norfolk’s resiliency initiative in response to the neighborhood’s vulnerability to flooding. Some of the hospital’s CT scanners and other radiology equipment were moved to the third floor during construction. All six of the hospital’s emergency generators will be above grade when the project is complete. The modernized Kaufman and River Pavilion towers will include window glass with variable tinting, similar to eyeglass lenses, to conserve energy on air conditioning.

“We are proud to provide world-class care, but our patients and clinicians deserve more modern facilities,” says Kurt Hofelich, president of Sentara Norfolk General Hospital and corporate vice president of Sentara Healthcare. “We are investing in the future to improve the patient experience, prepare for new technologies and bolster our position as a mid-Atlantic referral center.”

Medical center saves costs and resources in the operating room

University of Maryland Medical Center has saved $1.2 million after adopting Practice Greenhealth's "Greening the OR" initiative