On Oct. 4, 2018, the Centers for Medicare & Medicaid Services (CMS) issued the 2017 annual report to Congress in Memo #19-01-AO/CLIA. The document outlines accrediting organizations’ (AOs’) activities within the 2017 fiscal year.

There are several sections, but a few attracted particular interest from the American Society for Health Care Engineering (ASHE) and should be closely monitored by facility management teams.

In a press release issued the same day, CMS Administrator Seema Verma stated, “Today we are taking action to improve our oversight of [AOs], including by increasing transparency for patients on the organizations’ performance.” One of the three areas that Verma stated CMS would enhance its oversight and quality transparency regarding AOs is by redesigning the process for AO validation surveys. 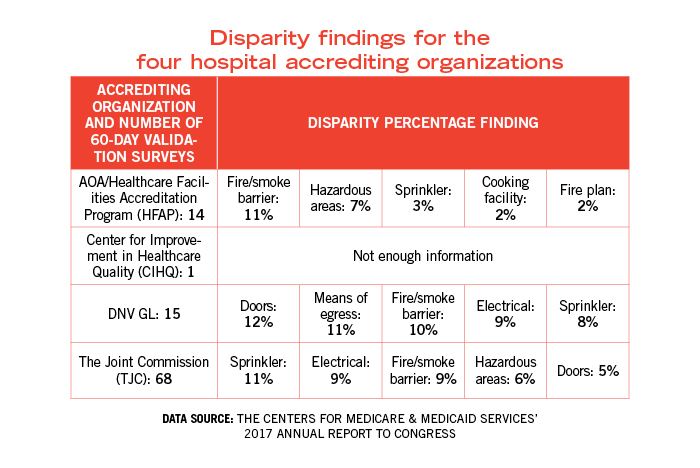 Historically, one of the methods that CMS used to evaluate the effectiveness of each AO was through random validation surveys. This process involved CMS choosing a sample of hospitals in which the state agency (SA) performed a validation survey within 60 days of the AOs original survey. The two surveys were then compared, with the results providing a disparity percentage between the AO and the SA. The process was intended to score the adequacy of each AOs survey process.

However, effective on the date of the news release, CMS began a pilot test to eliminate the historical second state-conducted validation survey and opted to use direct observation during original AO-run surveys. CMS believes that this process will allow for a more effective performance evaluation by AOs, while relieving hospitals of the potential surprise state validation survey. This process is a direct result of the AOs high disparity rates compared to SA surveys.

A task force within ASHE’s regulatory affairs committee has been monitoring this issue noting the impacts from the reports received. Thus far, the surveys that include direct observation have been more inclusive and have resulted in more findings.

A health care facility perspective on managing the accreditation process.

Building the case for hiring staff in-house for compliance tracking.