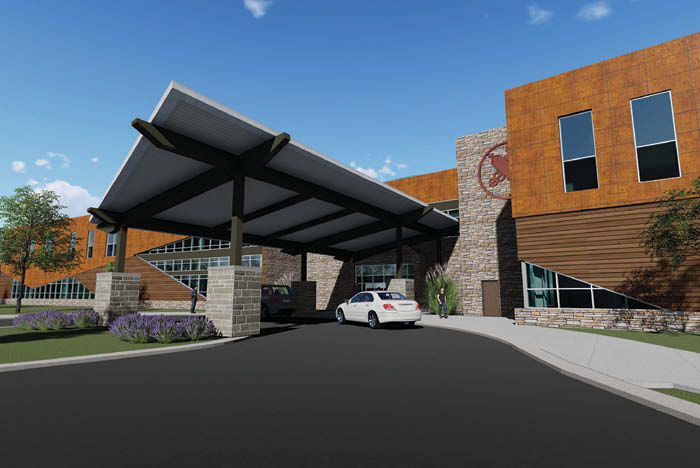 The under-construction Rapid City Health Clinic in South Dakota was designed with the health care needs of a specific and diverse user population consisting of the three distinct tribes occupying the western half of South Dakota: the Rosebud Sioux Tribe, the Oglala Lakota Nation and the Cheyenne River Sioux Tribe.

The current facility is operated from converted mobile homes, trailers and a 90-year-old tuberculosis sanitarium spread across the several acre site. The need for consolidation, modernization and critical improvements in the health care environment serving 40,000 patients has made national headlines.

Plans call for 139 standardized exam rooms outfitted for use in the nine specialty and primary care clinics in the new facility, thus enabling staff to provide the highest level of care expected at a large modern ambulatory care clinic while maintaining the flexibility to adapt as needs change or new specialties are introduced.

The staff core in each clinic allows for provider and medical team collaboration, increasing the likelihood of a patient getting the holistic care they need before leaving their appointment. Urgent care and tribally administered clinics add after-hours service and a level of culturally appropriate care that would not be possible at an exclusively government-run facility.

Also in this series:

How design is helping to address health access deficiencies among patients in indigenous and sovereign jurisdictions.