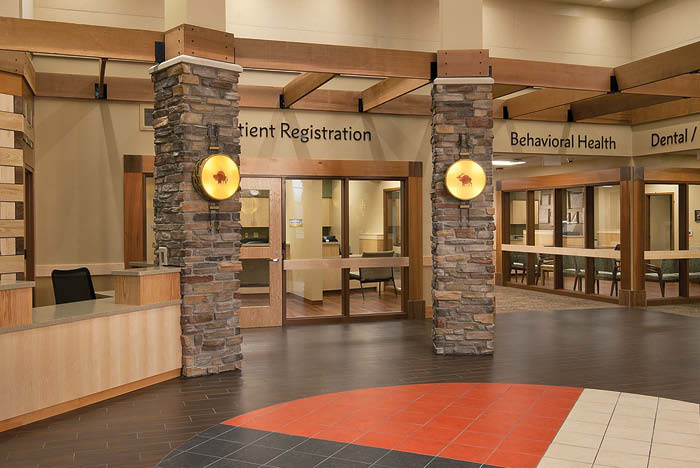 The floor of Pokagon Band Health and Wellness Center’s rotunda and lobby features a four-colored Medicine Wheel oriented to the four directions.

The phrase “Indian Country” is used to describe the many self-governing, indigenous and sovereign jurisdictions across the United States. This seemingly unifying term is misleading, as it includes a vastly diverse group living in conditions that vary widely from coast to coast in a number of geographic, social and economic metrics, all of which impact health outcomes.

Health care designers working within the boundaries of Indian Country often must navigate the dilapidated condition of existing facilities, remoteness of existing health care facilities to tribal population centers, immense cultural diversity, and the widespread dignity deficit that originates from a lack of health sovereignty in many native health systems. 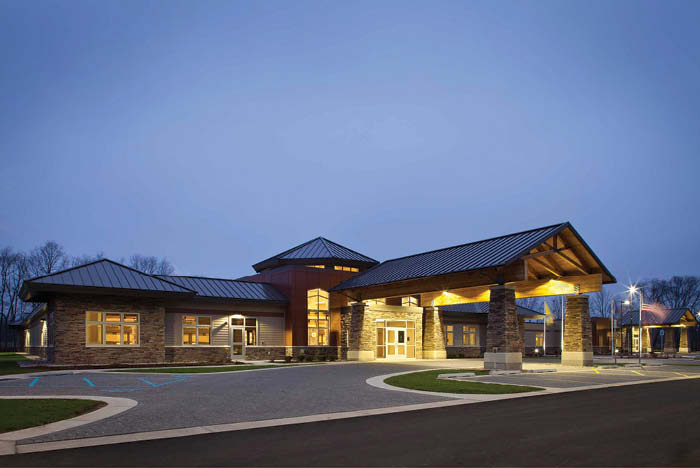 Seven Generations AE (7GAE), a tribally owned architecture and engineering firm based in Kalamazoo, Mich., is working on the forefront of a long-standing health crisis in Indian Country that is characterized by a lack of access to adequate medical facilities and a corresponding deterioration in health outcomes that continues to worsen in many tribal nations.

The outcomes of working with tribal and federal organizations to address deficiencies in the physical environment and expand the available health services in three distinct geographic contexts are detailed in the following case studies and in the accompanying sidebars.

The under-construction Rapid City Health Clinic in South Dakota (see sidebar on page 35) illustrates many of the challenges posed by existing site conditions and the context in which health care is being delivered across Indian Country.

The site’s history as the Rapid City Indian School, an involuntary boarding school for Lakota children that opened in the last decade of the 1800s and then as a segregated tuberculosis sanitarium in the 1930s, is readily apparent in the original red brick structure that houses the Indian Health Service’s hospital that is referred to as “Sioux San.” The physical condition of this 90-year-old facility, and those like it across the Great Plains, have garnered national attention for their inability to provide effective, modern care.

The diversity of the patient population is underscored when one considers that designing for Indian Country means designing for 574 federally recognized tribes that have 574 unique cultural traditions, histories, medicinal practices and contemporary needs.

A new building provides more than a collection of exam rooms, waiting areas and offices. The clinics become informal gathering places and furnish the infrastructure to support community events that range from flu-shot clinics to public health education classes as well as large group or ceremonial uses.

These buildings can be the epicenter for a renewed sense of health sovereignty for the tribe in a culturally reflective health environment.

While it is important not to overestimate the capacity of design to single-handedly address widespread health deficiencies in tribal communities across North America, it is critical not to underestimate the profession’s reach when considering the influence health environments have on the healing process. 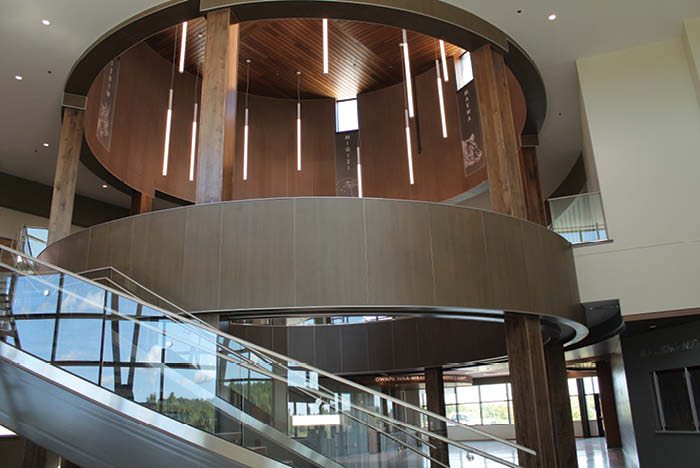 The drum-inspired rotunda in the lobby of the Mille Lacs of Ojibwe District One Clinic features panels that showcase the seven clans of the Ojibwe.

Partnering with tribal communities to restore a greater level of health sovereignty with regards to their facilities begins with inclusion of all stakeholders early in the design process, requires a degree of humility on the part of the design team and results in a health care environment that meets technical and intangible needs that are unique to each community.

The cultural indicators incorporated in all three health care design case studies are far from universal. Cultural indicators are the physical manifestations of a worldview. In the same way that language reveals one’s most ingrained biases about the world one inhabits, so too does architecture.

While some indicators are shared between tribes, such as an observance of the primary building entry or lobby oriented to the east, many Pacific coast tribes orient their entries to the west. This reversal may represent a greater cultural preference for facing the water rather than toward the sunrise or facing an opening away from westerly winds.

The process of uncovering these cultural indicators can be difficult and time intensive. Simply asking stakeholders to list culturally driven priorities for a new clinic tends not to yield the desired result for two seemingly conflicting reasons.

The second challenge is far harder to overcome and is the result of years of policy-driven cultural genocide. In many communities, the government-sanctioned programs have fragmented or outright erased significant portions of a community’s cultural memory.

Those community members who hold the tribe’s traditions, practices and language — collectively referred to as “lifeways” — have become few and far between, which further underscores the need for new facilities that safeguard both the health of the current generations and incorporate the wisdom of generations past.

Contemporary design in Indian Country is trying to do its part in overcoming generations of deep-seated experience with a health care system that was predicated on the belief that the communities for which these facilities were built would gradually cease to exist.

Many of the chronic ailments experienced across Indian Country are linked to a disruption of culturally appropriate lifeways, including dietary and medicinal traditions. Designers must strive to not only provide space for the practice of culturally appropriate healing but make it feel that a fundamental respect for the patients’ social and physical well-being drove decision-making.

The process of translating cultural indicators into the built environment involves an investment in consensus building among diverse stakeholders so that concerns are validated and voices are heard throughout the design process. Active engagement is required to deliver a design with sufficient depth that community members can recognize themselves in the building and feel a sense of ownership of their health care environment. 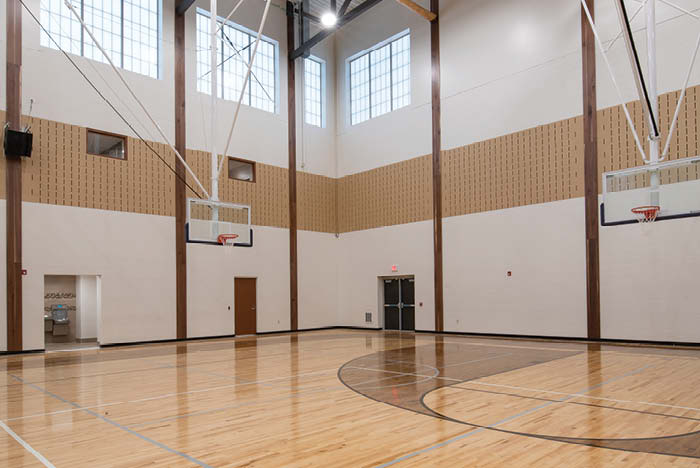 At the Pokagon Health Services Clinic in Dowagiac, Mich. (see sidebar on page 33), circulation spaces and wayfinding elements are infused with additional meaning. The patient entry is a rotunda topped with clerestory openings, and each of the supporting pillars hold a light shaped to resemble a drum. The floor depicts the Medicine Wheel, a symbol tied to all phases of life, traditional medicinal practices, and the well-being of the individual and tribe.

At the Mille Lacs Band of Ojibwe District One Clinic in Onamia, Minn. (see sidebar on this page), the entire community is represented by the depiction of the seven primary clans rendered in lighted panels. The concept sketches, which were drawn by a tribal citizen, hang over the patient reception area.

Vertical circulation often holds incredible opportunity for incorporating cultural indicators. In this case, the curved stair is anchored off a two-story “drum,” so patients transitioning between floors experience walking the path of the circle. The desire to bring these elements into the design resulted in the building hugging the edge of a nearby wetland visible from patient waiting areas and the inclusion of fireplaces in the lobby.

In the Rapid City Health Clinic, the multicultural end users made a single tribe aesthetic solution impossible, leading the design team to seek out broader Lakota themes. The lobby rotunda, entered from the east, is a towering open space capped by a Lakota Star skylight that is reflected in the floor pattern.

The interior spaces of the 200,000-square-foot facility are navigated using color palettes and images that represent the inherently culturally significant landscapes from which the patients have traveled. The primary patient corridor is rendered in plan as the Missouri River that was once the boundary of the Lakota Nation.

As discussed previously, access to medical care is severely limited. For some patients in their service area, the drive to the new Rapid City Health Clinic will be more than three hours. When appointments are scheduled, they are often a multiday and multigenerational affair, with follow-up appointments not occurring for several years.

It is important to emphasize that the barriers, both geographical and cultural, are substantial and do not constitute a lack of interest in maintaining health, or indicative of laziness or irresponsibility. In most cases, the many obstacles to accessing health care in Indian Country are simply too high.

To address the challenge of distance in Indian Country, co-located comprehensive health services from pharmacy to podiatry and dentistry to diagnostic imaging are a driving factor in design. Regular visits are a rarity, especially with larger regional health care facilities. Therefore, it is imperative that the buildings support as many services under one roof while offering the provider the option of prescribing a same-day follow up with neighboring specialists. The providers are part of a team that works to improve the holistic health status of a patient and their families.

The resources required, both in time and financial investment, to travel several hours to a doctor’s appointment are substantial, making the time spent in the clinic all the more valuable. Realizing that not all barriers to accessing medical care have a direct architectural solution, it remains possible to plan for the best possible service given the larger constraints.

The intergenerational aspects of health care delivery in Indian Country are unique or at least more regular, as compared to delivery in the dominant culture. This underscores the need not only for a diverse range of specialties, from pediatrics to geriatrics, but for a facility that is responsive to age-related needs.

Each community has different priorities based on what they needed their facility to be. For example, members of American Indian and Alaskan Native communities are twice as likely to be diagnosed with diabetes and 90% more likely to die from diabetes-related illness as compared with the general population.

In the Rapid City Health Clinic, serving a diabetic patient population meant ensuring that the inclusion of diabetes-related specialties like podiatry were planned for and easily accessible by those with limited mobility. Similarly, at the Pokagon Health Services Clinic, a family activity center opened in 2019 to promote general cross-generational wellness in the community. Finally, at the Mille Lacs District One Clinic, social and community support programs focused on combating larger public health concerns that went beyond the clinical setting.

The inclusion of cultural indicators designated by tribal or federal organizations are not merely appliques to these medical facilities. The ideas about how a health care building should behave in the landscape, orient itself to the sun and how it will touch the earth are fundamental to everything that follows.

Steve VandenBussche, AIA, is vice president of practice, and Alex Hokkanen, Assoc. AIA, LEED Green Assoc., is project coordinator at Seven Generations Architecture + Engineering in Kalamazoo, Mich. They can be reached at svandenbussche@7genae.com and ahokkanen@7genae.com.

The article is based on a presentation given at the American Society for Health Care Engineering’s 2019 International Summit & Exhibition on Health Facility Planning, Design & Construction.