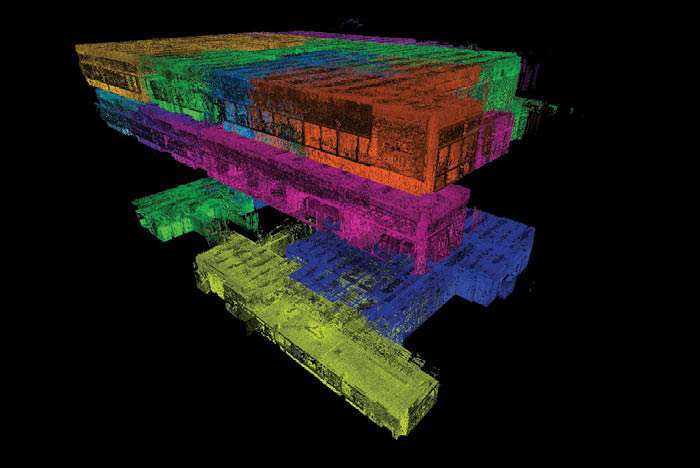 When the COVID-19 pandemic hit, the University of Arkansas Medical Sciences (UAMS) Medical Center based in Little Rock, Ark., decided not to delay its already planned retrofit of Winthrop P. Rockefeller Cancer Institute. However, knowing that expanding its physical environment had to be balanced with safety, it determined to implement tools and processes that would minimize virus spread among its staff, construction workers and vulnerable patient population.

One of the many construction challenges that come with renovating an active facility during a pandemic is how to maintain social distancing. UAMS knew it was important to mitigate risk as much as possible and employed various strategies to do so. When it came to scanning the facility to provide progress updates for itself and collaborative data about the space for the design and construction team, UAMS called on its design firm Cromwell Architects Engineers Inc., Little Rock, Ark., to create a safe process.

Typically, a project of this size would require a team of at least three people to measure, scan and then develop data that can be used to collaborate with colleagues and build deliverables. After working with the data, it’s not uncommon for the team to return to the site a few weeks later to take additional measurements. Accuracy is critical in the process; however, multiple people working in close proximity for several days on the job site was not ideal during the height of the pandemic.

Wehmer notes that, oftentimes, interior scanning requires staging an area, using a tripod and capturing the space in parts before stitching the images together. But Cromwell needed a more efficient way to scan the space without compromising accuracy, data or quality of the scans while minimizing the number of people and time spent on-site.

“Working with drones has been great because of all the detailed data we get very quickly for the external scanning of a building,” Wehmer says. “But in the past, we have had a much slower process inside of buildings. Then I saw the BLK2GO, and I was blown away by how fast it is. I knew this scanner could help us gain the speed we were looking for when scanning interiors.”

The BLK2GO handheld scanner created by Leica Geosystems, headquartered in Switzerland, weighs under two pounds. As John did the initial walkthrough, the scanner captured the space and objects around it, continuously creating 3D digital point clouds as it captured the dimensions and imagery. The size of the hand-held scanner also enabled Cromwell to scan hard-to-reach spaces.

The scanner’s technology consists of a combination of high-speed dual axis light detection and ranging, a multicamera vision system, and an inertial measurement unit that makes the scanner able to orient itself in 3D space.

A simultaneous localization and mapping (SLAM) laser scanner knows where it is and what areas have been captured, and Wehmer could also capture individual, geotagged detail images while scanning. Using BIM and the data from the scans, Cromwell was able to quickly create 3D models of the space with accurate, complex 2D floor plans.

The process of scanning the floors and verifying the interior scans was completed by a single person in hours, making the workflow faster and safer, and enabling a faster turnaround time for deliverables. Using traditional scanners or even more traditional measurement tools, a project of this size would have required a team, with results available in a few weeks. Additionally, the scanner’s SLAM system eliminates the need for tripods and static scanning locations.

“I was able to do an initial walkthrough, scan the space and verify my scans all within three hours,” Wehmer says. “The handheld scanner has been an amazing tool for health care projects during the pandemic because we want to spend as little time as possible in a high-risk facility.”