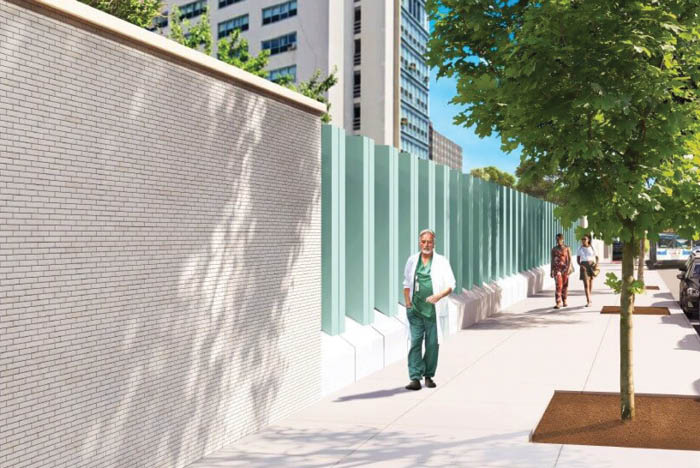 The flood resiliency wall at NYC Health + Hospitals/Metropolitan will feature vibrant designs that incorporate color and richness as a visual celebration of the East Harlem community.

No hospital wants to face a 500-year flood. But as climate change intensifies, so does the chance that hospitals will face extreme weather events like hurricanes and flooding more frequently than once every half millennium.

The last decade alone has produced some of the worst hurricanes (Sandy, Harvey and Maria) in recorded history. And this year’s hurricane season from June to November is expected to be above average, making it the seventh consecutive above-average hurricane system, according to the National Weather Service.

But hospitals that have been in the path of a hurricane and/or extreme flooding — or those concerned they could be — are designing structures built to withstand extreme weather conditions.

Devastated by Hurricane Sandy in 2012, NYC Health + Hospitals/Metropolitan in East Harlem, New York City, recently broke ground on a new $120 million flood wall to better protect the hospital and surrounding area from flooding caused by heavy rain and storm surge. Funded by the Federal Emergency Management Agency (FEMA), the project includes construction of a perimeter flood wall and an upgraded storm water pumping system. The future structure will be able to withstand a 500-year flood, according to FEMA.

“Metropolitan’s critical electrical systems were damaged by contaminated floodwaters during Superstorm Sandy,” says NYC Health + Hospitals President and CEO Mitchell Katz, M.D. “This flood protection system around the hospital campus will minimize risk to public health by allowing us to continue serving our patients and the East Harlem community during and after future storms.”

In 2020, the town of Norwood, Mass., experienced catastrophic damage after more than 4 inches of rain fell in about 90 minutes. Norwood Hospital suffered extreme storm and flood damage to the building and parking lot. The flooding forced the facility to close temporarily during the height of the COVID-19 pandemic. Eventually, the disaster forced the closure of the hospital, which was more than 100 years old.

Just 16 months after the damage, Norwood broke ground on a new 400,000-square-foot hospital in the same location. Set to open in 2024, the state-of-the-art facility will feature resilient design components, stormwater-mitigation strategies and redundant utility services to the building. The design also features above-ground tanks to supply oxygen as well as emergency generators to provide power to critical systems in the event of a power loss. The new hospital design also reduces impervious surface area on-site to reduce stormwater flow.

Another hospital that has experienced flooding for decades is taking a proactive approach to extreme weather. Roper St. Francis Healthcare, Charleston, S.C., is located in a high-risk flood area frequently hit by heavy rainstorms and tidal events. As part of the system’s 10-year strategic plan called Roper St. Francis Healthcare 2030, Roper Hospital is moving from its downtown Charleston home to a new location not yet announced.

While the move will provide patients with easier access to the hospital, minimizing risk from extreme weather events is also a primary goal. The new facility will be technologically and structurally upgraded to better withstand natural disasters such as floods, hurricanes and earthquakes. Sea levels in Charleston Harbor have risen a foot in the past century, and the pace is accelerating, increasing the hospital’s vulnerability to flood damage.

Health care facilities across the country that are facing extreme weather events can access a roster of federal resources from FEMA, which recently reinstated its reinsurance for the National Flood Insurance Program.

Dealing with extreme cold weather has become a greater issue for hospitals in recent years.

Has your health care organization made a significant technology investment to improve facility operations in the last year?