First responders get an all-access pass

Loyola University Chicago continues to upgrade its organizationwide safety program with the integration of an all-digital, preplan program for first responders called CommandScope. The campus fitted more than 80 of its buildings across two campuses, including health facilities, with the technology. 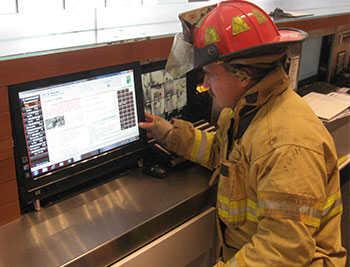 “With this latest expansion we bring every researcher and support staff the peace of mind that if an emergency does occur, first responders can perform with knowledge,” says Stephen Nardi, CEO of RealView LLC, which created the platform. “We designed CommandScope with the mindset that this is an advantage first responders need and deserve.”

Loyola’s Center for Translational Research and Education is its latest facility to adopt the technology.

Three students at the University of Toronto have developed a wearable device to help prevent patient falls, specifically among elderly patients.

The device, dubbed the OmniStep, is worn on top of an ordinary shoe. A combination of echolocation and infrared sensors detect when an object is in a person’s path and vibrates, alerting the user to be careful.

In preliminary tests, the prototype detected objects higher than 30 cm with 90 percent accuracy and smaller objects with about 75 percent accuracy. OmniStep is designed to ignore larger objects such as doors, walls and chairs that are easier to see.

“About half of all falls happen because there is an obstacle that someone didn’t see,” says Gabriel Keller, a medical student at the university. “As well, elderly people are also slower in terms of reaction time. We wanted to create something that would detect objects and provide an advanced warning system.”

Keller and the other student inventors, physiology majors Windy Wang and Yinyin Zhou, will demonstrate their device at the IEEE Engineering in Medicine and Biology Society’s International Student Conference in Ottawa, Ontario, at the end of this month.

Virtual reality gets a boost in speeding up the design process

NBBJ is bringing a virtual reality startup into its own offices. The global architecture and design firm announced a new business partnership with Visual Vocal with the goal of developing a productivity platform based in virtual reality.

The concept will allow stakeholders on new design projects not only to immerse themselves into unbuilt environments, but also to provide instantaneous feedback. The idea is that with communication platforms built into the visual model, design teams can do away with inefficiencies that often come when team members are based in different locations.

“NBBJ’s decision to launch Visual Vocal is representative of our ongoing mission to find more informative and inspiring ways to engage clients in the design process,” says NBBJ Managing Partner Steve McConnell, FAIA. “This partnership will radically shift the way design feedback is sourced and integrated into projects, and the speed at which it can be done. As a result, we can more broadly and deeply engage project stakeholders than we could have dreamed in the past.”

The product will launch as an exclusive NBBJ tool later this year so it can be piloted on health care, corporate and urban planning projects. NBBJ hopes to bring the tool to the greater architecture, engineering and construction industry after testing it first.