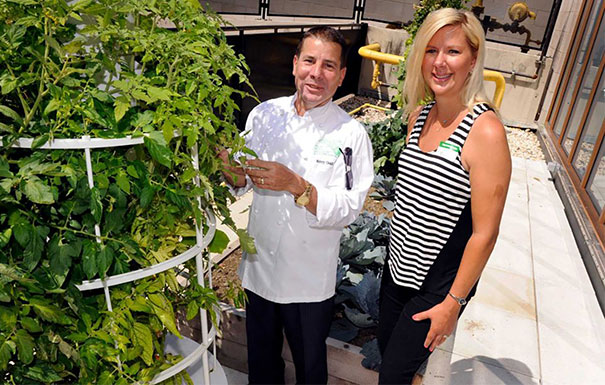 Some hospitals’ answers to improving their patient satisfaction scores might already be in their own backyards.

Or, in the case of Connecticut’s New Milford Hospital: in their rooftop gardens.

With a focus on seasonal, unprocessed food and a classically trained chef at the kitchen’s helm, New Milford’s menu resembles that of a chic, farm-to-table restaurant rather than a typical hospital cafeteria: The vegetable dish will depend on what was picked from its rooftop garden that day, or what it received from the nine local farms from which it regularly sources ingredients. The finished product is a healthful menu (a typical dessert is a chickpea chocolate cake, for instance) that New Milford's patients, staff and community have come to love.

“Often, patients will be discharged, and will ask if they can stay for lunch,” says Chef Kerry Gold.

Dubbed the Plow to Plate program, a former New Milford executive pioneered this focus on local, healthful food in 2006 to prevent diseases such as obesity, diabetes and heart disease from escalating in patients.

“The idea was for the hospital to act as a change agent, where we would set an example by offering patients, employees and the community good food,” says Program Coordinator Susan Twombly. “We provide food that’s not been processed, deep-fried or things of that nature [as a means] of preventive medicine.”

Learn more about the program from our sister publication, Hospitals & Health Networks.

Magee Rehabilitation Hospital transformed its rooftop into a space for relaxation and healing.