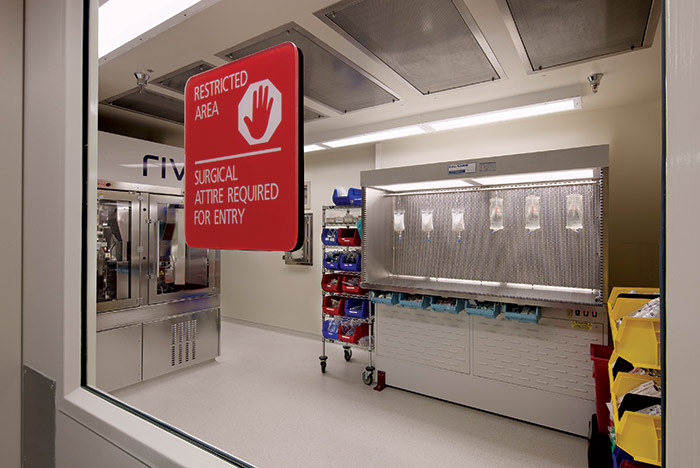 Many people in the health care environment are already familiar with USP 797, Pharmaceutical Compounding — Sterile Preparations. USP 800 is not as widely known, but that is about to change. First published in February, USP 800 will become officially enforceable on July 1, 2018.

As the title indicates, USP 800 addresses the handling of HDs in a hazardous setting. This topic had been addressed in a substantial manner in USP 797; however, in the creation of USP 800, USP has created a separate guideline to address just HDs (and is currently revising and reissuing USP 797 accordingly).

The USP 800 guidelines on handling HDs are now more comprehensive and stringent than they were in USP 797.

The list of HDs that fall within the jurisdiction of USP 800 is published by the National Institute for Occupational Safety and Health (NIOSH). As of October, the latest version of this list was titled “NIOSH List of Antineoplastic and Other Hazardous Drugs in Healthcare Settings, 2016.” Antineoplastic is defined as “acting to prevent, inhibit or halt the development of a neoplasm (a tumor),” which means chemotherapy drugs. Mirroring USP 800, use of the term HDs in this article will refer to the NIOSH list.

As part of conformance to USP 800, pharmacies must maintain a list of HDs with which they work and must include any items on the current NIOSH list. That list must be reviewed at least every 12 months. Whenever a new drug or new dosage of an existing drug is used, it must be reviewed against the list and added to it.

In general, working with any drug included on the list will precipitate conformance with USP 800. However, there are some exceptions on both ends of the spectrum that should be noted.

On one hand, “investigational drugs” may be subject to USP 800 even if they are not on the NIOSH list. USP 800 indicates, “if the information available on a drug is deemed insufficient to make an informed decision, consider the drug hazardous until more information is available.” On the other hand, drugs that are on the NIOSH list may not be subject to USP 800, under two conditions.

The first condition is that an “assessment of risk” must be performed by the pharmacy. At minimum, that assessment must take into account the type of HD (e.g., antineoplastic, non-antineoplastic or reproductive risk only), dosage form, risk of exposure, packaging and manipulation. The second condition is that those drugs must be “final dosage forms of compounded HD preparations and conventionally manufactured HD products, including antineoplastic dosage forms that do not require any further manipulation other than counting or repackaging (unless required by the manufacturer).”

USP 800 governs the following steps in the process of handling HDs: receipt, storage, compounding, dispensing, administration and disposal. Key aspects of USP 800 as they pertain to storage and compounding are addressed below:

Storage. This is a significant portion of the guidelines in that it adds a separate room to the pharmacy program, which did not exist in USP 797. This required room for storage of HDs must be a negative-pressure room vented to the exterior with 12 air changes per hour (ACPH).

USP 800 also comments on storage details within this room, indicating that products should be stored on shelving (not on the floor). In areas where seismic design is a consideration, the shelving details should “meet applicable safety precautions such as secure shelves with raised front lips.”

In terms of what drugs should go into the storage, the regulation again differentiates between HD products that require “manipulation” and those that don’t. HDs requiring “manipulation” must be stored separately from non-HDs in a way “that prevents contamination and personnel exposure.” On the other hand, “non-
antineoplastic, reproductive risk only, and final dosage forms of antineoplastic HDs may be stored with other inventory if permitted by entity policy.”

Compounding. Compounding is the practice of creating specific, custom medications for individual patients. This type of medication can be contrasted with the type of medications that most of us typically use, which are produced in large quantities by pharmaceutical manufacturers, available in fixed formulations and doses, and purchased in retail pharmacies.

USP 800 lists three types of controls related to the compounding process, which are utilized to “protect the preparation from cross-contamination and microbial contamination (if preparation is intended to be sterile)”: The primary engineering control is given the acronym of C-PEC. This is the piece of equipment in which the compounding work is done (i.e., a biosafety cabinet). The secondary engineering control is given the acronym C-SEC. This is the room in which the C-PEC is placed. Another category of controls, called Supplemental Engineering Controls, do not merit an acronym and are “adjunct controls to offer additional levels of protection.” An example given is a closed-system, drug-transfer device, a small portable device that should be used either in the C-PEC and at bedside. No other examples are given of this category of controls.

The USP 800 requirements for the C-PEC are that the equipment must create an ISO 5 environment (or better) within the equipment, be a ventilated device and operate continuously “if it supplies some or all of the negative pressure in the C-SEC or if it is used for sterile compounding.”

The guidelines state: “If there is any loss of power to the C-PEC, or if repair or moving occurs, all activities occurring in the C-PEC must be suspended immediately.” However, due to the critical nature of the chemotherapy drugs being compounded as well as worker safety, it is a good idea to place the C-PEC on emergency power to prevent the compounding work from being suspended.

Deciding which type of C-PEC to choose for each project or facility is a complicated decision that should involve the pharmacist, facilities department, hospital engineering department, hospital safety office and equipment manufacturer as well as the architect and engineer. USP 800 includes further discussion of this topic in Appendix 3 — Types of Biosafety Cabinets.

Other pharmacy areas to consider

Looking beyond storage and compounding spaces

In addition to storage and compounding areas, other pharmacy design considerations will be affected by U.S. Pharmacopeial Convention’s USP 800, Hazardous Drugs (HDs) — Handling in Healthcare Settings. They include:

The USP 800 requirements for the C-SEC are that the room be externally vented with HEPA filtration, a separate room dedicated to this function, a negative-pressure room (between 0.01 and 0.03 inches of water column relative to all adjacent areas), and have “appropriate air exchange” (i.e., ACPH).

USP 800 also recommends that “consideration” be given to maintaining power for the ventilation systems of the compounding room to maintain negative pressure in the event of power loss. Again, due to the critical nature of the work, as well as the requirement for worker safety, it is a good idea that the ventilation equipment for the C-SEC be placed on emergency power.

Additional requirements for sterile compounding necessitate that the C-SEC have a minimum of 30 ACPH; neither a laminar airflow workbench nor a compounding aseptic isolator is permitted to be used as a C-PEC; and per USP 797, a pressure gauge and daily or continuous monitoring is required for a room in which sterile compounding is done.

USP 800 offers the option of doing sterile compounding in a nonclassified (non-ISO space). Such a nonclassified space is referred to as a containment segregated compounding area (C-SCA). If such an option is selected, the C-PEC and C-SCA must be externally vented; the C-SCA must have a minimum of 12 ACPH; the C-SCA must be a negative-pressure room (between 0.01 and 0.03 inches of water column relative to all adjacent areas); the maximum beyond-use date must be as described in USP-797 for CSPs [compounded sterile preparations] prepared in a C-SCA; and only low-risk and medium-risk HDs may be prepared in a C-SCA.

Additional requirements for nonsterile compounding are: The C-PEC must be ventilated (“preferred”) or have “redundant-HEPA filters in series”; the C-SEC does not have to be classified (i.e., meet ISO requirements); the C-SEC must have a minimum of 12 ACPH; and the C-SEC must be a negative-pressure room (between 0.01 and 0.03 inches of water column relative to all adjacent areas).

The guideline specifically adds that the USP 797 architectural requirement for the compounding rooms (i.e., “surfaces of ceilings, walls, floors, fixtures, shelving, counters and cabinets in the nonsterile compounding area must be smooth, impervious, free from cracks and crevices and non-shedding.”).

USP 795, Pharmaceutical Compounding — Nonsterile Preparations, does not address pressure monitoring, so the guidance from USP on this subject is that “entities should follow applicable federal, state and local regulations.” However, pressure monitoring is a way to verify the efficacy of the negative pressure relationship to surrounding rooms, so a pressure gauge also may be added to this room.

In a configuration where there is one hood, a C-PEC used for sterile compounding may be used for “occasional” nonsterile compounding, but must “be decontaminated, cleaned and disinfected before resuming sterile compounding in that C-PEC.” Additionally, any non-HD prepared in this hood must be “placed into a protective outer wrapper during removal from the C-PEC and … labeled to require [Personal Protective Equipment] handling precautions.”

Storage and compounding. Although USP 800 provides extensive requirements for the storage room and the compounding room, it does not offer any guidance on the physical relationship between the rooms. As the author’s office has begun implementation of USP 800 on several projects, it has developed a strategy for this relationship, which seems consistent with the intent of the guideline.

As USP 800 is careful to regulate the storage of the HDs in a separate room under negative pressure, it seems antithetical that those drugs would then be brought back into the general pharmacy and/or anteroom before being delivered back into the C-SEC. So, the author’s office has been configuring the USP 800 storage room contiguous with the compounding room, and placing a pass-through between the two rooms. In this way, once the HDs have been deposited into the USP 800 storage room, the only place they go from there is into the C-SEC.

William N. Bernstein, LEED AP, AIA, is the principal of Bernstein & Associates Architects. His firm has been at the forefront of implementing USP 797 and USP 800 in pharmacies across the US. He can be reached at wb@bernarch.com.

Less known than USP 797 and USP 800, it still has relevance for facilities.

Genesys is the first of 75 Michigan organizations expected to receive the certification this year.

FGI's new guide responds to growing use of outpatient facilities