Health system gets a lift from safe, patient-handling equipment 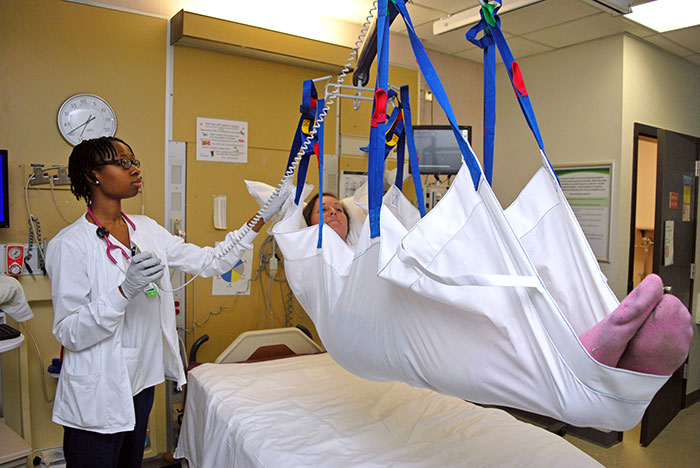 The system recently earned the American Nurses Credentialing Center’s Magnet Recognition, making it one of only 29 health systems in the world to earn this distinction of excellence four times.

Despite its rich history and devotion to patient care, the health system identified a troubling trend some years ago. The number of staff injuries and money allocated for workers’ compensation related to moving patients had increased to an unacceptable level.

To reverse the trend, SJ/C embarked on a multiphase safe patient-handling and movement program in 2011 that started with the installation of ceiling lifts in 38 patient rooms in Candler’s critical care department, where most patient-handling injuries occurred.

The ongoing program included the recent installation of 78 ceiling lifts in patient rooms and other departments in St. Joseph’s. Mobile lift devices capable of lifting up to 1,000 pounds and other safety equipment also were purchased for both hospitals.

While the goal is to install lifts in all patient rooms as well as other care areas, including radiology, emergency services and nuclear medicine in both hospitals, the program already has had an impact.

While the program is reducing staff injuries, it also is intended to keep the health system prepared in the event that hospitals become required by the federal or state government to take steps to ensure safe patient handling. Some states have proposed requirements.

“The safety of our co-workers and patients is a top priority, so installing lifts was an easy decision,” says Teresa Warren, clinical nurse manager of the intensive care unit and progressive care unit at Candler Hospital, one of the first departments to get the lifts.

“But we also saw regulations on the horizon, so we want to stay ahead of the curve,” she says.

SJ/C selected safe patient-handling products made and distributed by Tollos Inc., Owings Mills, Md., which together with the health system created a flexible timeline for installation and ensured staff training.

“Studies show that when equipment, like ceiling lifts, are not readily available, the staff then perform manual lifts,” says Jon Winer, president and CEO, Tollos Inc.

“This out-of-sight, out-of-mind syndrome is negated when ceiling lifts are installed. St. Joseph’s/Candler employees have immediate access to ceiling lifts and they are, therefore, being used,” he says.

Keeping nurses and other caregivers injury-free also benefits patients. “If nurses are injured and out of work, our patients suffer, too,” Warren says. “The decrease in patient-handling injuries we’ve experienced preserves the health of nursing and ancillary staff.