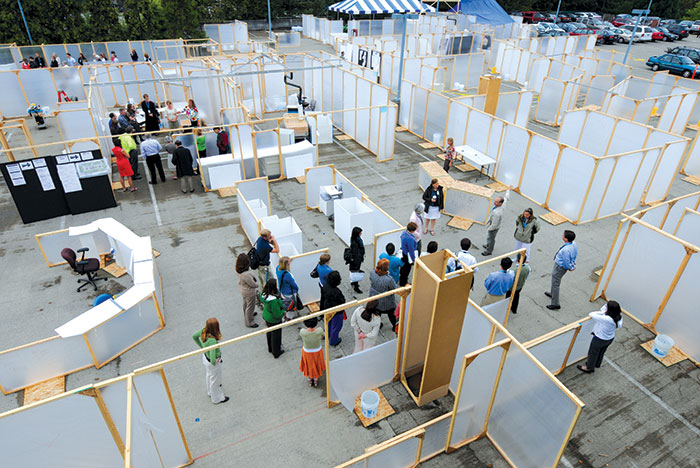 From bottlenecks in emergency departments (EDs) to communication breakdowns between departments to lengthy walks down corridors, hospitals face daily inefficiencies that can affect patient care, staff performance and their own bottom lines.

But many hospitals are headed down the right path as they work to streamline the processes that can make or break a facility, according to Health Facilities Management’s 2016 Hospital Construction Survey, conducted in cooperation with the American Society for Healthcare Engineering (ASHE).

The survey comprised more than 240 hospitals nationwide, about evenly split among rural, urban and suburban facilities.

More than ever, hospitals that plan to launch a new construction or renovation project are taking measures to put the correct processes in place long before the first patient walks through the door rather than after the facility is built.

“You don’t design a new hospital around an old process,” says Joseph Sprague, FAIA, FACHA, FHFI, principal and senior vice president at HKS, an international architectural firm headquartered in Dallas. “You start in a smart way and take a comprehensive approach that right-sizes the facility without sacrificing patient safety or health.”

In terms of improving workflow, the survey shows that 60 percent of facilities are using evidence-based design while another 57 percent have adopted mock-ups and staff interviews to improve their facility planning processes.

Hospitals are beginning to explore high-tech solutions including rapid prototyping/mock-up testing events and simulation software, which have been adopted by 6 percent and 17 percent, respectively.

They also are going to greater lengths to seek input from clinical and nonclinical stakeholders to shape new designs and processes from inception.

Efficiency is a multifaceted issue connected to every area of the hospital from the design, to the daily operational processes, to the technology used, to the hospital's physical location and its satellite facilities and many other factors.

And as hospitals make necessary changes, new efficiency issues may develop. For example, hospitals that have added onto their existing buildings over the years may have created longer walking distances for staff members and hindered communication, among other problems. The move to single-patient rooms also can be an issue for staff and patients.

“Semiprivate rooms are going away,” says Joan L. Suchomel, AIA, ACHA, EDAC, principal at Eckenhoff Saunders Architects in Chicago, a founding member of the American College of Healthcare Architects and 2016 president of the American Institute of Architects Academy of Architecture for Health. “That in itself makes the patient units larger and longer, which means patients and staff are going to have to walk farther.”

Due to the rate of change, adaptability — along with flexibility and standardization — is key to every area of design during the current climate of reform and uncertainty in health care, she says.

“New facilities need to be able to expand or contract instead of just adding on,” Suchomel says.

Hospitals are beginning to move in that direction. The survey shows that hospitals are embracing design features like flexible, adaptable patient rooms (38 percent) and furniture (27 percent). Even larger numbers are adopting standardization throughout the facility (65 percent).

Using modular designs to create identical spaces can actually facilitate the ability to adapt a space to the facility’s changing needs, Sprague says.

“When you have a standardized layout throughout the hospital and a flexible modular approach that allows you to change out the furniture, to move the medical equipment, etc., it really gives the hospital more freedom — especially if more change is coming down the road,” Sprague says.

Hospitals also are adopting features designed to improve communication and decrease interruptions, including zoned rooms and departments (adopted by 16 and 20 percent of respondents, respectively).

For example, a medication room might be zoned to include a separate, well-lit space for staff who dispense medicine. “This is an area where errors with serious ramifications can happen,” Suchomel says. “It’s important to have a quiet space with good lighting so nurses can see what they are doing without being distracted.”

An ED might include a separate section to treat minor emergencies only, reducing long waits and improving patient flow. Other hospitals are taking the zoning concept even further, stationing health care providers in a community setting such as a fire station, primarily to deal with patients using 9-1-1 on a regular basis who might otherwise end up in the ED.

“This is something we are seeing more hospitals and health care systems doing as a strategy to improve patient flow in emergency departments,” says Chad E. Beebe, AIA, FASHE, deputy executive director of advocacy for ASHE.

Another up-and-coming strategy is zoned paging, where technology allows hospitals to define specific areas in which only targeted departments and certain staff receive pages.

Just as central to implementing design efficiencies is gauging their progress, which hospitals are doing in many ways.

Comprehensive staff surveys and focus groups — cited by 48 and 57 percent of respondents, respectively — are guiding facilities through every phase of the design process and beyond.

Prior to starting a 450,000-square-foot, 144-bed expansion in 2014, leaders at Nemours Alfred I. duPont Hospital for Children in Wilmington, Del., interviewed 250 staff, patients and families who toured mock-up rooms during the design phase. After the facility’s first year, the hospital conducted a post-occupancy evaluation, interviewing the same people to identify successes and failures, says Arthur Brinkworth, construction project manager for Nemours.

“We wanted to know: What did we get right? What did we miss?” Brinkworth says. “I believe our goal is to improve upon the designs we deliver by reviewing and incorporating the feedback we received where applicable.”

Overall, Brinkworth said the project was highly successful and offers numerous benefits for staff, patients and their families.

Other facilities are seeing similar progress.

Said another: “Lean design and elimination of excess movement by staff.”

And another: “Standardized setup in patient exam rooms in one of our medical office buildings with very positive results.”

Overall, funding for construction remained relatively flat, dipping slightly from last year, which experts say could be related to the focus on consolidation and purchasing new facilities. Respondents said that 23 percent of the facility’s capital budget is allocated for new construction, 24 percent for renovation and 16 percent for facility infrastructure.

Instead of focusing on new facilities, hospitals planning construction in the next three years are putting their money into renovation projects, continuing a trend from last year. For example, of the combined 37 percent that currently are building or planning acute care projects in the next three years, the overwhelming majority — 77 percent — are planning an expansion/renovation vs. new construction.

Acute care numbers may continue to rise as hospitals that have long focused on building outpatient facilities begin to shift resources to the central hospitals that may have been on the back burner under the Affordable Care Act, says Randy Keiser, vice president and national health care director, Turner Construction Co., Nashville, Tenn.

“In my opinion, we may be peaking out on building outpatient facilities and medical office buildings (MOBs), and starting to spend money on existing hospitals,” says Keiser, who has seen requests for proposals for acute care additions rise in the past four to five months. “The need is so great among baby boomers.”

For the time being, MOBs are still on the radar of hospitals focused on population-based health. In fact, at 55 percent, MOBs ranked second highest for planned new construction in the next three years just behind ambulatory facilities and parking structures (58 percent each).

But as a new presidential administration begins, hospitals may be taking a wait-and-see approach before committing to big-ticket projects.

“I suspect there will now be hesitancy for hospitals to pull the trigger on major jobs until we see which way the new administration is going,” Keiser says. “But renovations and additions will continue because health care is bursting at the seams, so they might choose an addition vs. building a giant hospital.”

Beebe adds that “projects will still be going ahead as planned, but it probably makes sense to pause before making a major decision right now.”

“There have been reductions in reimbursement for mental health services and it has displaced a lot of mental health patients,” Beebe says. “Hospitals building new behavioral health centers are trying to accommodate those people.”

Nearly one-third of the survey’s respondents are undertaking specialty hospital construction projects, and 50 percent of those say they are building or are planning to build behavioral health centers/psychiatric hospitals in the next three years. Children’s hospitals (21 percent) and cancer treatment hospitals (19 percent) were the next highest in this category.

Community-based initiatives remain a priority, with hospitals focusing on ambulatory surgery centers, health system-branded facilities in the community, immediate care facilities and fitness/wellness centers — initiatives that are in keeping with the focus on population health, Sprague says.

“Population health challenges hospitals to not only take care of patients within their four walls, but to also prevent them from needing to come to back to the hospital,” he says. “These types of projects are in line with those goals.”

Overall, the survey shows some encouraging trends as well as some areas for improvement.

More than 62 percent of hospitals completed projects under budget and on or ahead of schedule — a healthy percentage roughly in line with last year’s numbers. And 70 percent are commissioning health facilities projects (an audit to review performance of building energy systems), a rate Beebe hopes will continue to increase. “It’s encouraging that 70 percent of our hospital projects are being commissioned, but I would like it at 100 percent,” Beebe said.

But just 26 percent are using Building Information Modeling (BIM) for facilities operations, which Sprague says is largely a wasted opportunity — especially in terms of improving efficiency. “BIM makes us better problem solvers and designers on the construction site and integrates construction documents between design teams and buildings,” he says. “The benefits are enormous.”

Suchomel stresses the importance of having a site and facilities master plan and updating it on a regular basis, as a master plan is a living document that should guide the organization’s growth. The survey shows that 36 percent of respondents have updated their facility’s master plan in the last year while 11 percent said they do not have a master plan.

“Even an existing facility should update its master plan at least every five years,” Suchomel says. “It will save enormous amounts of time and money down the road.”

Staff inclusion in the design process

Health Facilities Management (HFM) and the American Society for Healthcare Engineering of the American Hospital Association surveyed a random sample of 2,336 hospital and health system executives to learn about trends in hospital construction. The response rate was 10.5 percent.HFM and ASHE thank the sponsors of this survey: Gordian, Messer Construction and Modular Services Co.

Whether from staff or patients, hospitals rely on design input from many stakeholders.

Does your health care organization involve medical staff during the design process of new facilities?