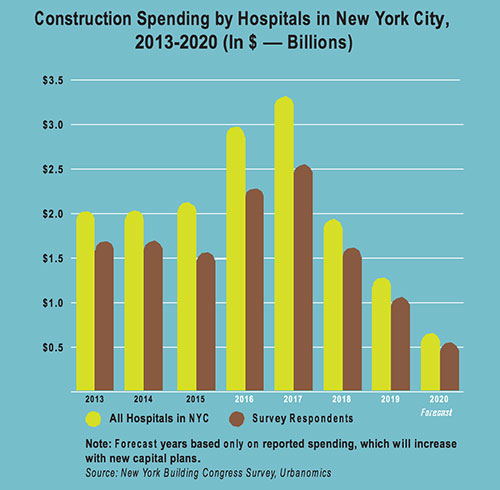 The robust market for health care facility construction in New York City is expected to continue into this year and beyond, according to "Healthy City: Inside New York City’s Hospital Building Boom," a new report from the New York Building Congress.

The Building Congress forecasts that health care construction spending in New York will increase to slightly more than $3.3 billion in 2017 from about $3 billion in 2016 for a total of about $6.3 billion over the two years.

“The health care construction market has been and should continue to be robust,” says Jeffrey Brand, principal and national health care leader, Perkins Eastman Architects. “Hospitals see their strategic goals as being linked to making major improvements to modernize and provide an increasingly broad array of services.”

Spending is projected to decline from 2018 through 2020 in part because hospitals have not completed their capital planning processes. Still, hospitals are projected to add an estimated 2 million square feet of hospital space from 2016 through 2020. Health care organizations are expected to continue expanding primary and outpatient care capacity on and off main hospital campuses.

“What our survey and research revealed is that much of the construction activity is being driven by health care sector that is changing before our eyes,” says Richard T. Anderson, immediate past president, New York Building Congress.

“New York City’s large hospital systems are consolidating, adding new services and expanding well beyond their historic borders throughout the city to transform how they deliver health care,” Anderson says. “And the types of investments they are making reflect this.”

The report, released in December, is based on a survey of New York City hospitals, interviews with leading health care construction professionals and an analysis of other related data.

To accommodate the growth and changes in health care delivery, the survey respondents reported already making $4.9 billion in capital investments from 2013 through 2015.

Maurice LaBonne, senior vice president of facilities and real estate, New York-Presbyterian, says, “A major focus of our capital program is developing more robust primary and preventive health services in communities all around the city. So you will continue to see projects to develop smaller facilities throughout the five boroughs in addition to the large investments being made on our central campus."

Despite the shift, major construction projects still continue. NYU Langone and NewYork-Presbyterian are working to replace or upgrade core hospital facilities on their main campuses in Manhattan.

NewYork-Presbyterian is building a 750,000-square-foot facility that will house an advanced maternity ward as well as a range of outpatient services. NYU Langone is completing two projects on its main campus, adding more than 1 million square feet of new space, including an 830,000-square-foot inpatient facility.

NYC Health + Hospitals plans to invest $200 million to $300 million annually from fiscal years 2016 through 2019 at 10 of its facilities in New York. The health system plans to harden facilities damaged by Superstorm Sandy as  well as update and modernize key buildings.