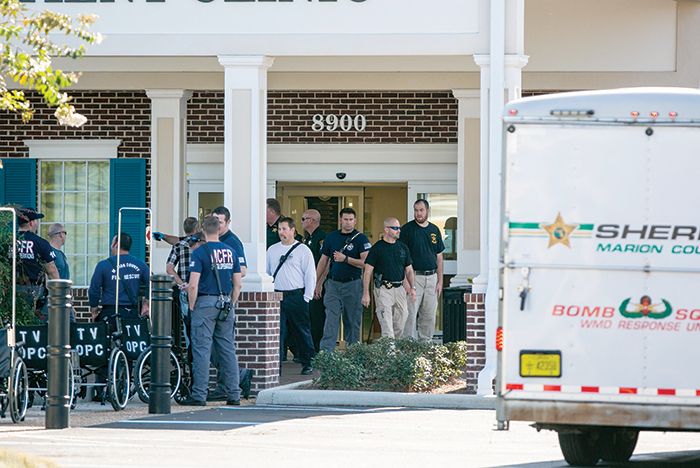 Law enforcement and fire rescue personnel at the scene of a shooting at The Villages VA Outpatient Clinic in Marion County, Fla.

A quick response by Department of Veterans Affairs staff and patients at The Villages Outpatient Clinic in Marion County, Fla., prevented a volatile and potentially deadly situation from escalating after they disarmed a man with a loaded rifle who confronted a doctor in the clinic.

Two shots were fired from the man’s gun but no one was injured during the incident at the clinic Dec. 13, thanks to fast action by VA police and others in the clinic who struggled with and held the man until local police arrived.

“Thanks to the quick thinking and brave actions of the VA clinic staff and patients to protect themselves and others, a potential tragedy was avoided and lives were saved,” says Charles P. Spencer, special agent in charge of the FBI Jacksonville (Fla.) Division.

In media reports about the incident, Todd Donahue, chief medical officer at the VA clinic, praised staff and said they responded to the situation just as they were taught in active-shooter training.

Stephen Cometa, 60, Ocala, Fla., was arrested and charged with forcible assault of a federal employee and possession of a firearm during a crime of violence, according to a statement from the FBI’s Jacksonville office.

He is in custody as he awaits a psychiatric examination, according to the U.S. Attorney’s Office for the Middle District of Florida, which is prosecuting the case.

An FBI criminal complaint reports that Cometa, an Army veteran, entered the VA clinic, located northwest of Orlando, with an AM-15 rifle and went to an exam room and banged on the closed door.

A doctor in the process of completing an examination with two civilians inside the room opened the door. Cometa pointed the rifle at the doctor and said, “Now you’re going to listen to me,” according to the criminal complaint.

It further states that the doctor and one of the civilians in the exam room tried to disarm and restrain Cometa when the gun discharged during the struggle. Two VA police officers responded and Cometa fought with them over the gun, which discharged a second time. One of the officers eventually wrestled the gun away from him and activated its safety.

Law enforcement recovered a backpack Cometa had dropped in the exam room and recovered a loaded 9 mm handgun, two loaded magazines with 26 rounds each for the rifle, and a video camera, the criminal complaint states.

Seven strategies to reduce risk of an active shooter

Association has granted provisional status for the standard and will close the comment period Feb. 23.