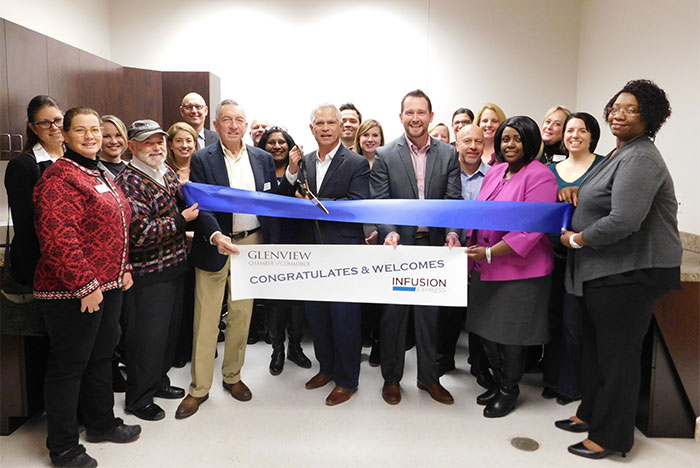 The goal of Infusion Express is to provide a calm and welcoming environment for its infusion patients. Celebrating the opening of its newest location in Glenview, Ill., are left to right: Don Peterson, CEO (with scissors); Josh Collard, director of business development; Daniell Ashford, nurse practitioner; Toni Haynes, patient advocate; and Meghan Brunch, R.N.

Infusion Express recently opened its eighth location, expanding its Midwest presence with a Chicago-area facility. Like its sister facilities in Kansas, California and Philadelphia, the newest Infusion Express aims to provide a calm and welcoming option for its patients.

“Most patients who need infusion therapy have only two choices: infusion at home or in the hospital. And many drugs for chronically ill patients can’t be done at home because they fall under a classification that requires them to be in a facility of some kind,” says Don Peterson, chairman and CEO. “We have a mix of private space and family rooms, so you can bring a friend or family members, read a book, watch TV, or sit and chitchat with other patients.” 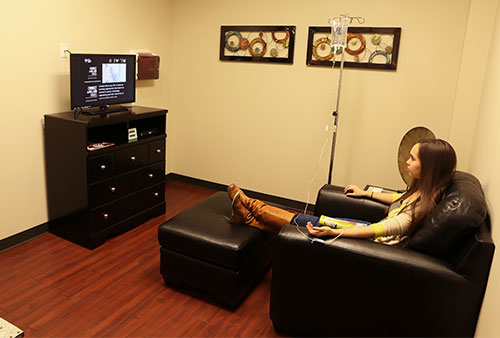 The infusion enters feature a mix of private and family rooms, both with designs in calming, neutral hues.

Peterson describes the design of Infusion Express centers as peaceful and Zenlike, with dark wood-grain floors, walls painted in soft, neutral hues and Buddhist images throughout. All of the rooms have dimmable lights but no doors so that when nurses are checking on patients, they can peek in without having to knock and potentially wake a napping patient. The understated designs are meant to remind patients to relax.

“This year is the year of infrastructure for us and catching up with internal processes and scalability,” Peterson explains. “We feel it might be the right time to talk to the Joint Commission and pursue that, especially because up until now, we have been totally independent, and so if we joint venture with the hospitals we’re now talking to, then we think the Joint Commission accreditation would be far more important.

Centura Health has partnered with a Texas-based developer that will share in capital costs as the health system rolls out a network freestanding emergency health care facilities.

Essentia Health considers how its 14-story hospital project can play a greater role in emergency preparedness for its region.